Terrifying Candyman a Name to Remember

There are things about Nia DaCosta’s Candyman that I will not talk about. A direct continuation of Bernard Rose’s 1992 horror favorite, itself an adaptation of Clive Barker’s short story “The Forbidden,” the movie is a superbly unsettling piece of psychological suspense. This insightful descent into madness ambitiously tackles themes ranging from economic inequality to systemic racism, all while scaring the bejesus out of the audience.

The screenplay by DaCosta, Win Rosenfeld and Jordan Peele has twists I refuse to discuss. What I will say is that every surprise is character-driven, and each turn of the screw issues from narrative necessity, not contrivance. Nothing happens by accident, and even seemingly insignificant moments have greater meaning when taken in context.

Artist Anthony McCoy (Yahya Abdul-Mateen II) and his art dealer girlfriend Brianna Cartwright (Teyonah Parris) have just moved into a posh new apartment located on the remnants of Cabrini-Green, a former housing project in a Chicago. Now thoroughly gentrified, the community retains a trace of its violent (and violently unjust) past. Investigating, Anthony is drawn to a small, dilapidated church and a few remaining rows of tract housing, all of it condemned and scheduled to be demolished.

Longtime local William Burke (Colman Domingo) tells Anthony the tale of Candyman, an urban legend borne out of unspeakable tragedy and death reaching all the way back to the late 1800s. Inspired by these stories, Anthony creates an interactive art project that proves to be unintentionally lethal. His work springboards the artist into the spotlight, even as he digs deeper into the Candyman myth.

Anyone who has seen the 1992 film already knows that investigating Candyman leads to no end of throat-slicing trouble. That’s how it is for Anthony and Brianna, as they’re dropped into a world of nerve-jangling terror from which there may be no escape. The neighborhood has changed, transformed from rundown and heavily policed apartment complexes into expensive, high-rise condominiums, swanky restaurants and snobbish art galleries, but the ghosts haunting the darkened streets remain, sadly perpetuating a cycle of violence without end.

With 2018’s Little Woods, DaCosta proved herself to be a confident filmmaker with a hypnotic visual style. That she ups her game with Candyman is hardly a surprise. DaCosta grounds the story’s more outlandish happenings in genuine emotions and authentic human interactions. Her characters come first, Anthony’s sojourn into the deepest recesses of identity and self-expression breathlessly disquieting.

Vanessa Williams is spellbinding in a brief appearance reprising her role as Anne-Marie, a former Cabrini-Green resident intimately connected to the Candyman legend. Abdul-Mateen is also wonderful, his jittery descent into obsessive psychosis perfectly fitting the overall mood. But it is Parris who impressed me the most. The way in which she cleverly becomes the focal point is masterfully accomplished, the actor delivering a subtly complex performance that builds to a powerful crescendo.

There is power in a name. Saying it aloud, hearing it uttered again and again throughout the ages can give this name resonance that stretches into eternity. Some names are comforting. Other names strike fear into the hardest hearts, leaving the listener cowering in a corner like a frightened child. You don’t need to say “Candyman” five times while looking into a mirror to know this film’s title has inherent power, and I wouldn’t recommend you do so.

As for DaCosta’s Candyman, however, see it at once. It’s magnificent. 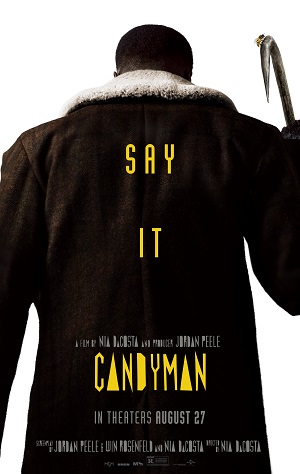