Like some sort of clever melding of The Ring and a Final Destination sequel for the cellphone era, writer/director Justin Dec’s feature-length horror debut Countdown is about an app that tells the user when they are going to die. Anyone that tries to change their fate? A carnivorous evil descends upon them, haunting every move they make before murderously striking at the exact second they were predestined to meet their maker. It’s a decent enough idea, one that creeped me out for a good 30 minutes. But as Dec’s movie went on the sillier it became, shifting in tone and style in ways that only called additional attention to just how asinine all of this was becoming. The final act is a groan-inducing slap to the face that had me wanting to throw popcorn at the screen in indignation, and any goodwill it had earned from me early on had completely vanished long before the end credits had started their crawl.

Recently hired on at the hospital she was interning at as a full-time nurse, Quinn Harris (Elizabeth Lail) is shaken when one her patients has a lethal mishap right before he was supposed to have minor surgery on a broken leg. Not so much because he died. More because he died so mysteriously right at the precise moment the Countdown app on his cellphone said he was going to. Quinn is worried because she downloaded the app herself and it only gave her a couple of days to live. Now she’s wondering if this isn’t as big a gag as she thought it was when she originally accepted the user agreement for the app, the young nurse determined figure out what is going on before a not-so-accidental accident befalls her, too.

As setups go, that one isn’t too shabby. The idea of a piece of technology being able to tell you the precise moment of your death is inherently eerie. The thought that people would download such a thing onto their cellphones en masse treating it like some sort of joke is undeniably believable. That they would then go something akin to crazy if their lethal death day was sooner than anticipated, whether they are taking the app seriously or not, is equally so. There’s something that works about the idea of a supernatural cellphone app, especially in this age of social media dominating the cultural conversation and people becoming more and more isolated and divorced from reality thanks to this handheld technological boom. I was drawn to that, and as such I was curious to see how Quinn’s story was going to unfold.

Dec has developed the core of a pretty great idea. Pity he didn’t do anything interesting with it. Even if the prologue is far too reminiscent of 2002’s The Ring English-language remake, it still succeeds in setting up the premise of the remainder of the film and setting the foundation of the app’s demonic mythology quite nicely. Dec also does a solid job introducing Quinn, giving her a believably tragic backstory and ensuring the viewer would find her someone worth rooting for as she tries to cheat Death’s designs. But almost as soon as she starts investigating the curious nature of the app’s history things begin to go noticeably haywire, and they become increasingly so when an overly-caffeinated priest (P.J. Byrne) enters the picture. As for the film’s climactic act, the less said about it the better, the ways in which the story goes completely off the rails and becomes so laughably dumb driving me nuts.

I like that the director wanted to infuse humor into this tale of terror. But as nice as that potentially might be a little bit would have gone a long way, where drowning the final half of the film in comic relief might not have been the best idea. I could handle the presence of an electronics store tech geek (Tom Segura) with a penchant for quick comebacks, pithy putdowns and sarcastic witticisms. But adding an additional bit of foppish tomfoolery with the introduction of Byrne’s priest tilts the scale too far away from suspense and terror in my opinion. It all starts to feel like farce. The laughs these two men generate never came across as genuine, and because of that an aura of semi-plausible reality is shattered, making Quinn’s situation feel even more outlandish than it already did.

There’s more I could say, especially about characters portrayed by Talitha Bateman (playing Quinn’s estranged younger sister Jordan), Twilight actor Peter Facinelli (as a lascivious hospital doctor with a shady bedside manner) and Jordan Calloway (as a fellow Countdown app user who, like Quinn, only has a handful of hours to live), but doing so could potentially spoil many of the twists Dec tries so hard to set up and unleash upon an unsuspecting audience. What I can say is that the filmmaker comes up with a plausible way for the app users to survive and shows that it will work only for it to be completely discarded for reasons best left unstated. Worse, he upends the mythology he so diligently crafted for the supernatural entity stalking Quinn in a way that’s so colossally imbecilic people in my preview audience started laughing just at the precise moment they should have been shrieking in terror.

It was all just too much for me. While I liked Lail, found her performance as Quinn to be reasonably strong, and even though the creature design for the demonic entity is moderately frightening, none of that was enough to overlook everything else that was annoying me about the overall motion picture. The only clock I cared about while watching the movie was my internal one, Countdown wasting so much of my time I couldn’t wait for the counter to hit zero so I could exit the theatre and go do something else. 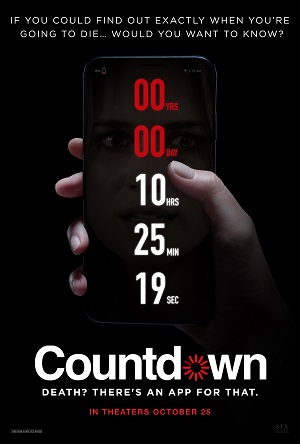