Cow is extraordinary. Andrea Arnold’s foray into documentary filmmaking is a treasure trove of emotionally bleak realism. It is a journey of discovery, analyzing a four-legged life that is viewed by the powers with control over its continued existence as nothing more than a resource to be mined and little else.

This seems like a long way from Arnold’s most notable features Fish Tank, Wuthering Heights, and American Honey. It is not. Much like those narrative films, this is an experiential endeavor where the harshness of daily living is juxtaposed against the massive beauty of the natural world. Arnold’s eye never wavers as she takes everything in, delivering humanistic insights into daily life on Earth that’s haunting, aspirational, and abhorrent in almost equal measure.

In some ways this is a mother-daughter story. In others, it is an observational exercise in cinematic minimalism. But the basic thread follows Luma, a dairy cow, from the moment of her birth to her own journey to motherhood. In-between there are forays into the field to eat some grass and long stays in massive pens having her udders milked for human consumption.

It’s all magnificently shot at cow-level by cinematographer Magda Kowalczyk, but don’t take this as an attempt to anthropomorphize the film’s protagonist like some Disney documentary. That is not the case. Instead, Arnold and Kowalczyk want to see the world from the animal’s POV, and in the process allow the viewer to grasp how humanity treats these creatures with stark clarity. There is no pulling back, the casual brutality of Luma’s treatment showcased with zero melodramatic embellishment.

This makes Cow something of a tough sit. Even at a brisk 94-minutes, the unrelenting sadness of Luma’s reality can frequently feel overwhelming. But the grand statements are left to the viewer to ascertain on their own. Arnold isn’t moralizing. She’s not interested in telling audiences what or how to think. This is a hypnotic immersion into a cow’s lonely life as she is slowly reduced to a commodity, presented as-is and nothing more. 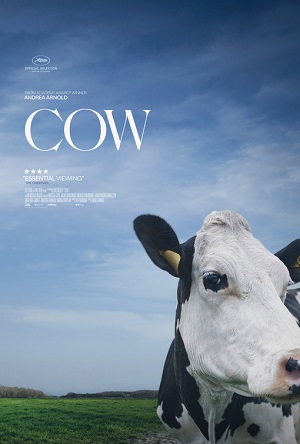