The Merc with the Mouth returns in Deadpool 2, the irreverent follow-up to 2016’s surprise R-rated smash superhero action-comedy Deadpool that brazenly took a character that was introduced in perfunctory and forgettable fashion in X-Men Origins: Wolverine and shockingly made something electric, alive and artistically viable out of him. Once again starring Ryan Reynolds as the titular comic book mutant who just doesn’t have what it takes to be a member of the X-Men, this sequel is certain to please fans of the first film. Featuring crackerjack action sequence directed with pinpoint precision by Atomic Blonde and John Wick impresario David Leitch while still maintaining the vulgar wit of its predecessor, it might even pick up some new ones as well.

For my part, I’m still not entirely onboard with these grotesquely humorous pieces of pop culture superhero entertainment. I just don’t find all of the Airplane meets Caddyshack meets Jackass gags consistently hilarious, while the infrequent breaking of the fourth wall, moments where Deadpool or his badly burned human alter ego Wade Wilson talk directly to the audience, not working near as well as they are undeniably intended to. At just under two hours, I also find that the film tends to overstay its welcome, certain sequences dragged out more because the filmmakers can do so than they serve any sort of narrative significance.

What I do appreciate is the actual plot that Reynolds and his returning Zombieland co-writers Rhett Reese and Paul Wernick have conjured up, much of it refreshing in its approach to how both heroism and villainy are depicted in superhero motion pictures. Deadpool lives in a moral grey area, his reasons for doing what he does normally coming from an altruistic passion to stand up for the downtrodden even if his lethal actions aren’t altogether justified. As such, the film’s supposed nemesis Cable (Josh Brolin), a cybernetically enhanced enforcer from the future who has gone back in time to stop a wrong that will lead to the death of his wife and child, isn’t your prototypical baddie. Better, neither is teenage mutant Russell, a.k.a. Firefist (Julian Dennison). He’s the one all of Cable’s murderous animosity is directed towards. But instead of making this kid a saintly soul just looking for a father figure to show him right from wrong, he’s as psychologically wounded and as morally crippled as anyone else in the movie proves to be, his journey adding an intriguingly complex dimension I can’t say I anticipated.

Not that any of what transpires is particularly revolutionary. The crux of the story still revolves around Deadpool/Wade dealing with his own emotional shortcomings as best he can, especially as they pertain to the eternal love of his life Vanessa Carlysle (Morena Baccarin). His reasons for trying to protect Russell from Cable are born from a fairly cliché bit of mundane and reductive tragedy that has him rethinking what he’s doing with his life as a superhero for hire. The script never deals with this melodramatic action film trope with any of the same guts, guile or wit it attacks so many other facets of cinematic comic book storytelling. Instead, it plays these elements frustratingly straight, adding an air of stereotypically clueless misogyny to the mix that’s rather unfortunate.

Which is crazy because, in almost every other way that matters, Deadpool 2 is enjoyably progressive. Negasonic Teenage Warhead (Brianna Hildebrand) returns to kick a little bit of sardonic butt and now she’s sporting an adorable, kindhearted girlfriend played with effortless guile and charismatic whimsy by rising star Shioli Kutsuna. There’s also the introduction of kick-ass mutant Domino portrayed with kinetic magnetism by “Atlanta” firebrand Zazie Beetz, the actress at times running away with the entire movie, stealing scenes left and right from both Reynolds and Brolin with ease. The casting of breakout Hunt for the Wilderpeople actor Dennison was also a major coup, the pint-sized New Zealander consistently earning laughs while at the same time managing to break my heart with his passionately emotional agility.

There’s a lot about the plot I’m leaving purposefully vague. Even the trailers, as ambiguous as they were attempting to be, still give away a handful of the film’s more potently silly surprises, not the least of which is the beginning of the X-Force team Deadpool will at some point find himself a part of. But the core elements are pretty straightforward, and because of that Reynolds gets to wildly do his thing as he talks back to the screen and rowdily let loose with a running stream of coarse one-liners that pushes the sequel’s R-rating to its breaking point. It’s also an excuse for Leitch to continue to show he can stage staggering action sequences better than just about anyone working today, the fluidity of the choreography of each set piece working in dynamic tandem with Jonathan Sela’s (Transformers: The Last Knight) cinematography beautifully.

Even so, I’m still not going to talk about any of the gags and I’m not going to reveal any of the names of the actors who pop in briefly for a cameo. These are all things a fan should discover on their own without any nondescript hints from me. What I will say is that, much like the first film, I’m totally fine with Deadpool 2, readily enjoying much of it. But that still doesn’t mean I plan on revisiting this sequel anytime soon, and as much as everyone else seems to go gaga for this particular mouthy mutant mercenary, part of me can’t help but wish that, after this adventure becomes a global hit, he finally decides to shut up. 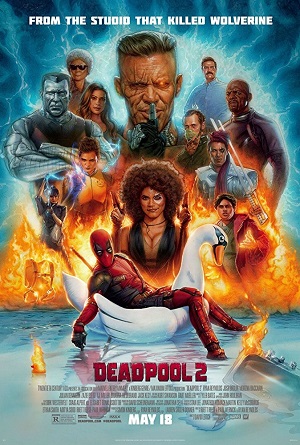