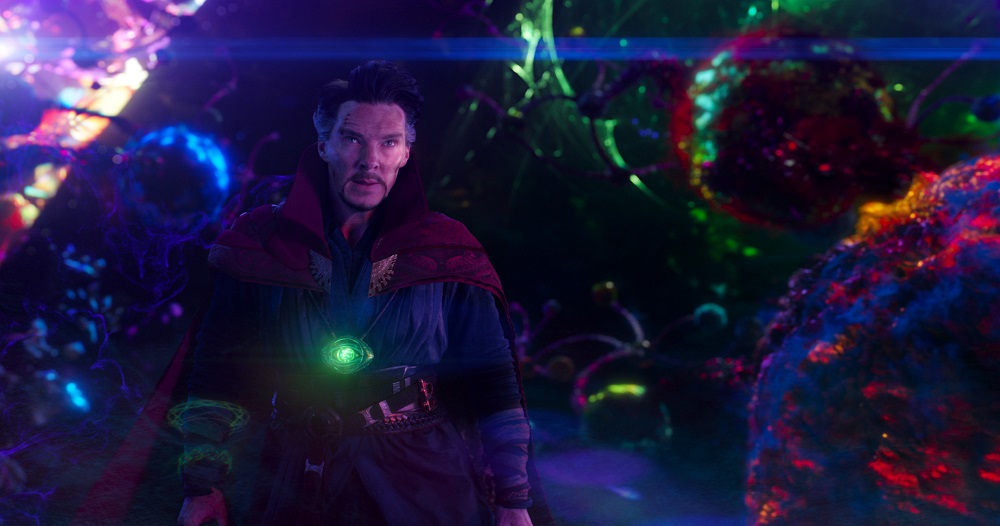 Doctor Stephen Strange (Benedict Cumberbatch) is a brilliant surgeon and he knows it, his skills in the operating room only exceeded by the massive ego that fuels his never-ending quest to be the best. But when a devastating car accident leaves him without the use of his hands, all of the things going on in his life that once held so much meaning now begin to evaporate as if they never existed, including a close friendship with former girlfriend and fellow doctor, Christine Palmer (Rachel McAdams). 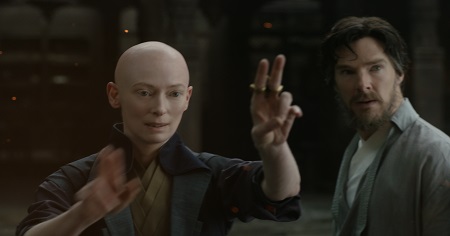 When traditional medicine fails to help him regain the use of his hands, Strange journeys to the Himalayan enclave of Kamar-Taj, hearing rumors that their unique spiritual techniques have shown the ability to heal even the most shattered and irreparable of human bodies. What he discovers goes beyond anything he ever could have imagined, a mystical being known as The Ancient One (Tilda Swinton) opening his eyes to powers beyond rational thought. Making friends with true believer Mordo (Chiwetel Ejiofor), Strange becomes obsessed with learning all he can about these mystical arts, never thinking for a moment that outside forces, led by the deranged and emotionally damaged Kaecilius (Mads Mikkelsen), are conspiring to destroy Kamar-Taj and bring unfathomable ruin to the citizens of the Earth.

Marvel’s latest adventure takes their cinematic universe into the realm of the supernatural, Doctor Strange a trippy, freewheeling jaunt into the comic book multiverse where time is fluid and death is only a doorway to a brand new adventure. An origin story that does not rely upon any of the Avengers to show up and add clarification as to what is going on (not to mention an adventure where it actually makes sense Iron Man or Captain America aren’t around to lend a hand), the movie is a stupendously entertaining thrill ride that breathes new life into this ongoing series. Much like Guardians of the Galaxy the movie hints at stories that go beyond the typical superhero status quo, and while there are plenty of little hints as to how Strange’s escapades fit into the bigger story, for the most part the filmmakers do a fine job of keeping things enjoyably self-contained.

There are issues, and I’m not altogether certain what is the best way to approach the major one. That’s the obvious whitewashing of a slew of ideas and themes, not the least of which is the all-important character of The Ancient One. In the original Stan Lee and Steve Ditko comic series, The Ancient One is a stereotypical white-bearded elderly Asian man. But in trying to stay away from one form of racist cinematic symbolism that goes back a good 80 years, writer/director Scott Derrickson (Deliver Us from Evil) and his fellow screenwriters C. Robert Cargill (Sinister) and Jon Spaihts (Prometheus) stumble face-first right into another one. Not only is a traditionally Asian character suddenly recast from a decidedly Caucasian perspective, this is also another in a long line of stories where a white male savior embraces the teachings of another culture, mastering its mysteries better and faster than anyone else has before.

There are thankfully a number of partially mitigating factors that allow this not to feel as egregious as would likely otherwise be the case. There’s the great use of veteran character actor Benedict Wong as an acid-tongued librarian who is also a selflessly determined soldier in the fight against evil, the transformation of his character from the comic books to be enthusiastically celebrated. There is also the love and care Derrickson and his crack team of craftsmen, most notably production designer Charles Wood (Thor: The Dark World) and costume designer Alexandra Byrne (Elizabeth), bring to things, the attention to detail required to give this world life sublime.

But the ace in the hole? That would be Swinton. Say what you will about having a Caucasian tackling the role of The Ancient One, that doesn’t make her performance any less extraordinary. Of all of the Marvel movies to date, this is, without a doubt, the single greatest performance any of these 14 comic book adventures have showcased so far. The power of her portrayal, the varying degrees of modulation, it’s mesmerizing, a dialogue between her and Cumberbatch as they stare at a stormy, lightning-riddled sky just glorious. Swinton says so much by speaking very little, each move of her arms or raise of an eyebrow hinting at expansive interior complexities that are as deep and as passionate as they are poignant and universal.

It also helps that this is as visually audacious as any film 2016 has had the good fortune to see, Derrickson unleashing a series of sights and sounds that are like Christopher Nolan’s Inception turned on its ear or an M.C. Escher drawing burst into constantly evolving 3-D life. A textural kaleidoscope where the possibilities are endless and the transformations only increase in size and in scope as events progress, this entry in the Marvel cannon is an eye-popping kick in the pants that only gets more imaginative as it goes along. It’s impressive stuff, and for the first time maybe ever the studio has engineered one of their comic book adventures in a way that makes it virtually imperative viewers take the time to see it in a theatre. 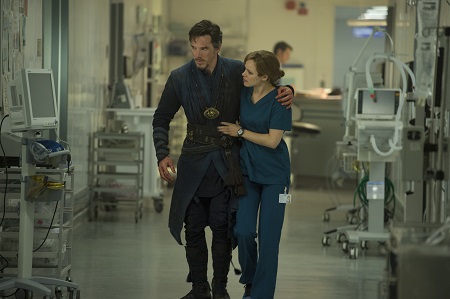 Some of the same Marvel weaknesses do come into play. Mikkelsen is a fine actor, and while Kaecilius is a formidable adversary for Strange, he still remains a frustratingly one-dimensional villain whose master plan is vaguely nonsensical. Even more so is the intergalactic, multidimensional ghoul pulling his strings, this supposedly all-powerful baddie a CGI monstrosity that’s more silly than he sadly is scary. As for McAdams, the talented actress is wasted in a throwaway secondary role that might be one of the more reductive the studio has seen fit to unleash yet, her wide-eyed looks of awe and astonishment growing increasingly tiresome as things go along.

Still, when Doctor Strange works it does so beautifully. Cumberbatch is nicely cast as the title character, and horror maestro Derrickson makes the jump to comic book daring-do with somewhat remarkable ease. While I have a number of concerns, especially on the cultural side of the coin, the simple truth is that I was grandly entertained watching Marvel’s latest superhero take flight. In fact, I almost can’t wait to see this master of the mystic arts return for another adventure, and not just alongside the Avengers, Doctor Stephen Strange a mysteriously fascinating firebrand of courage and curiosity deserving of future solo outings into the unknown sooner rather than later. 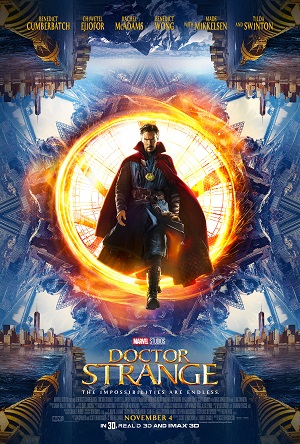