Kid-Friendly Dolittle a Nonsensical Talk with the Animals

Inspired by author Hugh Lofting’s classic stories about the kind-hearted doctor who could talk to animals, I’ve concluded that director Stephen Gaghan’s whimsically comedic fantasy-adventure Dolittle just wasn’t for me. It’s a movie where a character literally pulls a set of bagpipes out of an animal’s butt which subsequently allows a massive amount of gas to be released, and as this is not exactly my type of humor I can’t say any of what I just described pleased me in any way whatsoever.

But the kids in my promo audience appeared to adore this movie. They laughed continuously. I could see many of them inched forward in their seats staring at the screen in rapt attention. One little girl squealed, “He’s still alive!” in joyful euphoria at the most perfect moment imaginable. In short, they loved it, and who am I to try and tell them they shouldn’t have, all of which just cements my feeling that Dolittle wasn’t for me.

Not to say that means I’m giving Gaghan’s strange, sophomorically juvenile flight of fancy a pass. This isn’t a very good motion picture, most of it playing like a series of short vignettes one would find on the Cartoon Network or Nickelodeon than they would in the local multiplex. The director’s script, co-written by Dan Gregor and Doug Mand from an original story by Thomas Shepherd, is a limp, nonsensical endeavor that feels like it was heavily mutilated via studio interference at some point during pre-production. It’s all slapped together with lackluster laziness and moves forward with the grace of a poorly plotted video game cutscene that was inserted into the finished product at the last possible second.

It’s almost hard for me to believe Gaghan is the same guy that made Syriana. Not that this effort feels beneath his talents; any filmmaker should feel the freedom to work within any genre that calls out to them. I say this more because there isn’t any grace, inventiveness or panache to the film’s presentation or production. It’s like Gaghan is going through the motions and picking up a quick paycheck, and whether any of what the director is presenting makes a lick of logical sense appears to be an afterthought no one involved apparently took the time to ponder. It all plays like highlights from other, better pictures like Pirates of the Caribbean: The Curse of the Black Pearl, Paddington, The Chronicles of Narnia: The Lion, the Witch and the Wardrobe and any of the first few, more kid-friendly Harry Potter movies.

The plot has precious little to do with Lofting’s beloved source material other than Doctor John Dolittle (Robert Downey Jr.) can indeed talk to animals and ends up going on a fantastical sea voyage where a fabled new creature will end up being discovered. In this case, the heroic physician is snatched out of his self-enforced seven-year seclusion by the Lady Rose (Carmel Laniado) to come to the Queen of England’s (Jessie Buckley) bedside to see if he can save her from almost certain death. Dolittle quickly assesses what the problem is and immediately sets out for a mythical island once sought by his beloved late wife Lily (Kasia Smutniak) for the only known cure. He is joined on the voyage by his helpful animal assistants and exuberant youngster Tommy Stubbins (Harry Collett) who insists he will be the doctor’s apprentice, all of whom conquer their own individual fears as their adventure progresses.

After that there are sea battles, scenes with Jim Broadbent as a blustering nobleman, a sniveling Martin Sheen as a rival doctor who wants to see Dolittle fail and a sweaty, ultra-masculine Antonio Banderas as a pirate king who also happens to be Lily’s angrily aggrieved father. As for the never-ending menagerie of animals they are voiced by an all-star lineup which includes the likes of Emma Thompson, John Cena, Ralph Fiennes, Rami Malek, Octavia Spencer, Tom Holland, Kumail Nanjiani, Selena Gomez, Marion Cotillard, Frances de la Tour and Craig Robinson (whose aggressive squirrel Kevin has almost all of the film’s best lines). It’s a stunning array of talent. Pity almost none of them (Cena and Nanjiani have some amusing moments; can’t lie about that) have anything memorable to do or say.

Yet what’s the point of my coming down overly hard on Dolittle? I don’t think this is a very good movie. The majority of the children in my audience would almost certainly disagree with me vociferously if they had the chance to do so. For me, though, even if I could chat with a chimp in chimpanzee, converse in polar bear, curse in fluent kangaroo or answer with a boisterous, “of courserous!” if asked if I could speak rhinoceros, this still would have been one talk with the animals I’d rather have not engaged in. 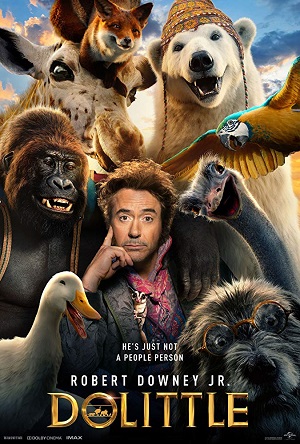