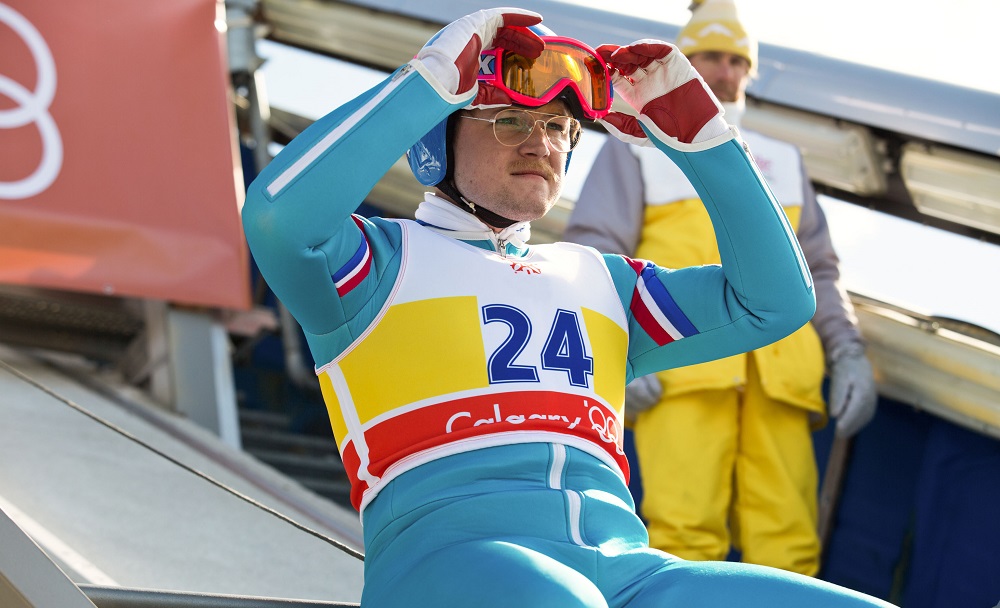 At the 1988 Winter Olympic Games in Calgary, Canada, a British ski jumper by the name of Eddie Edwards captivated the entire world with his competitive spirit and zest for life. Not because he was an exceptional athlete with a chance to compete for a Gold Medal, there was no chance of that, but more because his never-say-die, can-do attitude embodied the spirit of Olympics perfectly. Much like the Jamaican bobsled team competing in Calgary at the same time, there was something about Edwards, a purity to his attempts to soar into that moonlit Canadian sky, and as such anyone watching him couldn’t help but smile. 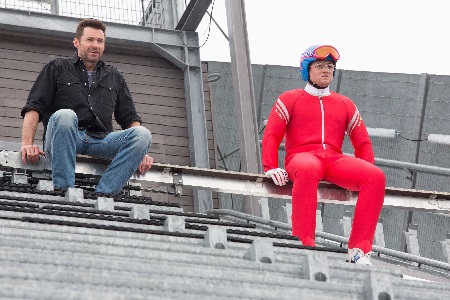 Why it has taken almost 30 years for someone to bring Edwards’ story to the screen is way beyond me. Here it is, all the same, director Dexter Fletcher (Wild Bill), producer Matthew Vaughn (Layer Cake, X-Men: First Class) and writers Sean Macaulay and Simon Kelton joining forces on the inspirational biopic Eddie the Eagle. Not so much the true story of the ski jumper’s path to the Olympics as one that enjoys playing in a fertile genre playground reminiscent of Rocky, The Rookie, Hoosiers and, of course, Cool Runnings (it chronicled those aforementioned Jamaican bobsledders), the movie is an enjoyable lark, and much like the man at the center of it all ends up being virtually impossible to dislike.

Ever since he was a little kid, Eddie Edwards (Taron Egerton) has been dreaming of going to the Olympics. He becomes obsessed with downhill skiing, getting good enough to at least be considered by the British Olympic Committee to potentially be a part of the contingent going to the ’88 Calgary games. But they don’t want him, the awkward young man not what those in charge of putting together the team are looking for to represent the country. Crestfallen but undaunted, Edwards discovers a loophole in the British Winter Olympic charter. There are no real rules for ski jumpers, and as long as he meets a few minimum standards, shows himself to be a competent jumper, his place on the Calgary team will be assured.

In the midst of learning the basics, Edwards inadvertently catches the eye of Bronson Peary (Hugh Jackman), a one-time U.S. ski jump champion who was famously kicked off his country’s Olympic team by world renowned coach Warren Sharp (Christopher Walken). Not wanting the lad to kill himself, the disgraced former athlete decides to teach him the basics, hoping that by showing him just how difficult and dangerous all of this is he’ll give up and go back home. Undaunted, Edwards forges ahead, and in the process wins Perry over to his cause, the two of them joining forces in order to achieve a pair of Olympic-sized dreams.

The movie doesn’t follow Edwards’ actual road to Calgary all that closely. The major difference? Peary does not exist, he’s a fictional construct, created by the screenwriters in order for there to be a beaten down, cynically human counterpoint to the eternally upbeat, wide-eyed optimism persistently conveyed by the story’s protagonist. As such, it forces the film to follow a student-teacher template we’ve seen numerous times before, reminding me mostly of The Karate Kid, at least as far as how Edwards and Peary ultimately interact with one another.

Funny thing, even though the film lacks an original bone in its entire body, Eddie the Eagle ends up being a gloriously entertaining frolic first scene to last. Egerton, playing a character about as far removed from his scene-stealing debut in last year’s ultraviolent Kingsman: The Secret Service, is a bolt of electric joy, his unwavering belief he can accomplish the impossible downright infectious. Jackman is also wonderful, and while he plays up his character’s various quirks a bit much at times, overall he’s a bouncy, devilishly sarcastic opposite to his pupil’s dogged optimism. As a pair, they are an almost perfect yin and yang, the whole movie revolving around their blossoming relationship, racing down 70 and 90-meter ramps at blinding speeds eager to achieve liftoff.

Stuntman Vic Armstrong, a veteran of a number of James Bond productions and the first three Indiana Jones adventures, handles the action choreography, and as such the jumping sequences are – even when aided by some obvious digital tinkering – fairly extraordinary, achieving a breathtaking tension that’s palpable. Composer Matthew Margeson’s (Scouts Guide to the Zombie Apocalypse) 1980’s-style electronic score is also wonderful, his compositions sounding as if they were pulled straight out of a John Hughes comedy like Ferris Bueller’s Day Off or Planes, Trains and Automobiles more than they do anything else, a very good thing indeed. It’s nicely stitched together by Fletcher, his direction having a relaxed, easygoing texture that allows for the inherent emotionalism of the scenario to build gradually, not feeling near as manipulative as by all accounts it unquestionably is.

Eddie the Eagle isn’t a great movie. It follows the underdog sports movie template far too closely, and knowing so much of Eddie Edward’s story had been fictionalized did keep me from developing as firm an attachment to the character as I normally would like to have had. Yet watching this eagle take to the sky still manages to be a cheery delight, the triumph he scores just by working so hard to stand on the same platform as the athletes he idolizes an inspiring victory viewers around the world should easily be able to relate to. 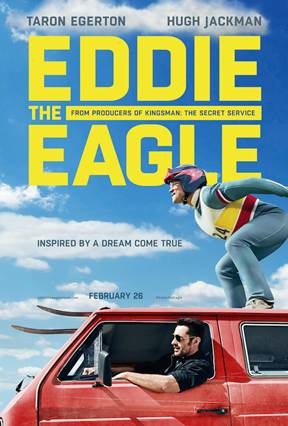