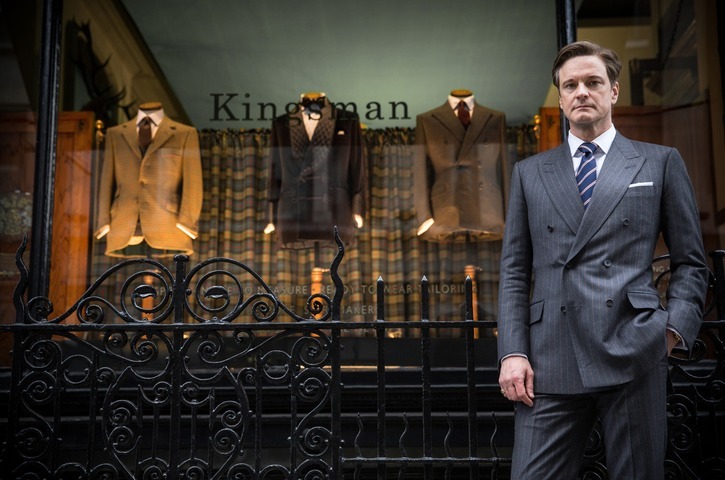 Since the end of WWII, a shadowy group of extremely well-funded Secret Agents known only as ‘Kingsman’ have been diligently working behind the scenes to keep our world safe from threats governments are either unable or unwilling to battle. Their exploits are never documented. Their successes are never chronicled on the front pages of major newspapers. They are nameless, faceless do-gooders who go above and beyond to do what is right, modern day Knights of the Roundtable willing to lay down their lives for causes greater than themselves. 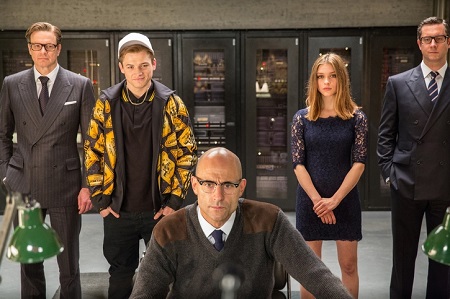 Gary ‘Eggsy’ Unwin (Taron Egerton) has been tapped by the debonair Harry Hart, a.k.a. Galahad (Colin Firth), as a potential Kingsman. He sees the greatness hiding inside the young man, knowing that if push came to shove he’d be willing to do whatever it took to save the day. While others like the group’s snobbish leader Arthur (Michael Caine) and tech wizard Merlin (Mark Strong) don’t quite see it all are willing to let the lad face the trials and tribulations that come with attempting to become an Agent, whether or not he makes the cut entirely up to him and him alone.

But Eggsy might not have the time to train in the manner necessary if he’s fully to come into his own, the Kingsman faced with an adversary unlike any they have encountered before. A billionaire philanthropist named Valentine (Samuel L. Jackson) has hatched a plan to combat Climate Change that, while unique, is also akin to murder on an epic scale, what it means for the majority of the world’s population downright lethal when showcased in the cold light of day.

Based on the popular comic book by Miles Millar and Dave Gibbons, director Matthew Vaughn’s (X-Men: First Class) latest aria of mayhem and violence Kingsman: The Secret Service is a terminally entertaining compendium of James Bond clichés and modern action histrionics that refuses to pull its punches or take the easy out. Writing again with frequent collaborator Jane Goldman (The Debt, The Woman in Black), the pair showcase a whipsmart ability to deconstruct genre and expectation with giddily exuberant aplomb. More Kick-Ass than Stardust, the film is a joyfully vulgar, gleefully brutal burst of mayhem and mirth, and while it doesn’t all work nearly as well as it probably should on the whole it’s still a total hoot nonetheless.

It helps that Firth, not exactly the first actor you’d think of where it comes to this sort of thing, ends up making an almost classic hero. His well-mannered man of action is a perfect gentleman even when he’s delivering body blow after body blow, just as apt to use his brain as his fist depending on how moment and need collide one with the other. He’s as refined as Connery but as lethal as Dalton with a charismatic dash of Moore meets Craig thrown in for good measure, sharing the same cocksure confidence of Brosnan and the unabashed masculinity of Lazenby in the exact same breath. He’s the ideal entry point into this world, its rules and its mechanics, and without him I’m positive I’d never have enjoyed myself near as much as I ultimately did.

Newcomer Egerton is also quite good, while the supporting cast, a mixture of familiar faces like Caine, Strong, Jackson, Jack Davenport and Mark Hamill and relative neophytes like Sofia Boutella and Sophie Cookson, is admittedly excellent, but without Firth willing to give as much as he does it’s likely their collective efforts would have been for naught. None of them are as important, none as memorable, his emotional complexity the driving force that allows the film to have a weight, meaning and impact I can’t say I anticipated.

Not to say Vaughn is making some important overall statement. The narrative might be revolving around some very current issues but that doesn’t mean the director and his co-writer aren’t gleefully having fun as they blow up a few heads while seeing an entire congregation of right-wing religious zealots cut one another down as if Armageddon were suddenly upon them. I give them credit for stating right up front that they’re going to go down a limb-severed, blood-splattered path and then having the courage to go right there with all guns blazing. It’s nasty, sometimes sickening stuff, all of it delivered with a satirical edge that cuts right to the bone.

It’s admittedly a little odd how lily-white this film is, the only real minority presence the two main villains out to cause worldwide chaos. On top of that, Vaughn and Goldman don’t treat their main female characters particular well, which is strange considering just how three-dimensional and interesting the parts they’ve composed for actresses to portray in past efforts like Kick-Ass and Stardust have oftentimes been. Finally, it’s also a little unclear just how seriously we’re supposed to be taking things, and while I believe it’s all as tongue-in-cheek as it appears I could understand how some might want to take the filmmakers to task for how they discuss topics as far-ranging as Climate Change, global terrorism and political behind-closed-doors deal making.

No matter. For the most part Kingsman: The Secret Service is made with gleeful anarchic relish, and at no point during its 129-minute running time did I feel bored or offended. Featuring crackerjack action sequences, laugh-out-loud moments of humor and emotional beats that caught me off-guard, in a lot of ways Vaughn’s latest is right up there with his best work as a director, the end product showcasing a confident maturity that’s sometimes been absent from a few of his previous endeavors. 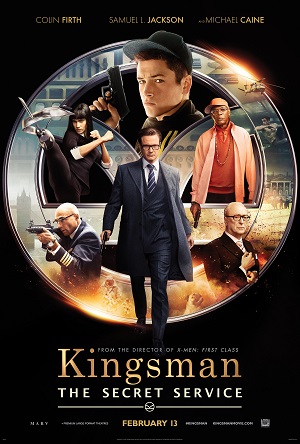