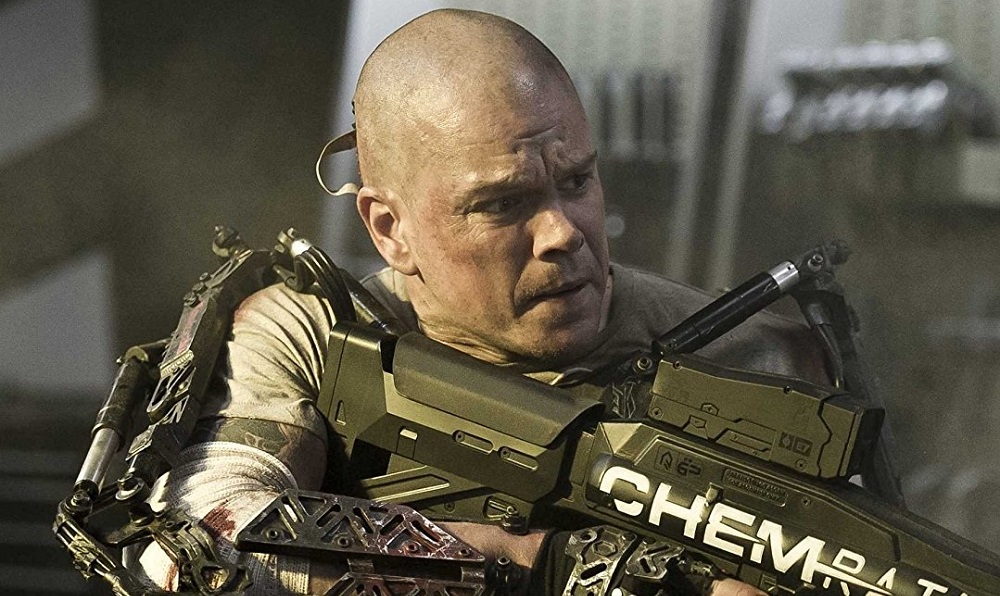 Elysium is a difficult to review. The science fiction spectacle is writer/director Neill Blomkamp’s follow-up to his much lauded, Best Picture nominated District 9. Like it, this story is set in a somewhat dystopian wasteland where a downtrodden segment of society must stare down their supposed betters in a quest for equality. Additionally, Blomkamp attempts to fill his tale with massive amounts of social commentary, the messages he’s attempting to impart delivered with all the subtlety of a swift kick to the face. 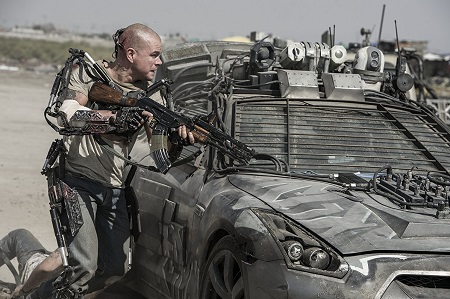 Unlike District 9, the cardboard nature of the plot dynamics, most notably as they pertain to the characters themselves, is annoying noticeable, the cliché delivery of the messaging also a significant sticking point the director’s debut managed to avoid. The whole thing is extremely obvious, the movie moving towards its inevitable conclusion with methodical efficiency, the chances of anyone being surprised by a single second almost impossible.

Thankfully, Elysium is so well made, so well acted (with one major, somewhat surprising, exception) and so expertly constructed the film ends up being easy to forgive for  many of its more egregious flaws. While the messaging is on the heavy-handed side, those who agree with Blomkamp’s statements are going to eat up his commentary on class warfare and our collective descent into a dehumanized society by the bucket loads, the filmmaker constructing arguably the most anti one-percent motion picture financed by a major Hollywood studio in recent memory.

The basics involve an ex-con named Max (Matt Damon) working on the line in a Los Angeles law enforcement robotics factory circa 2159. After accidently being showered with lethal doses of radiation and given five days to live, the former car thief hooks up with his former boss Spider (Wagner Moura), taking part in a plot to steal financial data from a wealthy industrialist. Why? Doing so will score him an illegal ticket to Elysium, a gigantic space station orbiting the Earth where the wealthy elite live in crime-free paradise, disease virtually eradicated thanks to a life-saving technology not allowed on the starving planet around which they circle.

After being hooked up with stolen military hardware which is literally bonded to his skeleton and hard-wired into his cranium, Max decrees the target for their endeavor must be John Carlyle (William Fichtner), the CEO of the robotics company he used to work for. Problem is, Carlyle has been conspiring with Elysium Secretary of Defense Delacourt (Jodie Foster) to orchestrate a non-violent coup, the tech information for doing so hidden within the confines of his computer-augmented brain.

Max ends up with this information stuck inside his own head, and Delacourt will do anything to get her hands on him in order to have access to it so she can instigate her plan. Not only is the reluctant soldier and revolutionary now being hunted by a bloodthirsty mercenary named Kruger (Sharlto Copley), but he also has to deal with a crisis of conscience involving former flame Frey (Alice Braga). She just happens to be a doctor who has witnessed the medical depravity affecting the Earth firsthand, and she’s also got a daughter, Matilda (Emma Tremblay), in the last stages of Leukemia, meaning she desperately want to get up to Elysium same as Max.

There’s nothing subtle about any of this, the characters never wavering from being anything other than who they appear to be at first glance. The exception is Max, but it isn’t like his evolution from selfish misanthrope to selfless warrior is all that surprising. The choices he makes, the decisions he is forced to face, all of them are expected, leading to a climactic denouement that, while suitably inspiring, balancing both tragic and heroic undertones nicely, doesn’t exactly produce the tearful emotional response part of me thinks Blomkamp was aiming for.

While this isn’t a plus, the filmmaker does manager to overcome many of these narrative problems in no small part thanks to the talents of his extraordinary cast. Damon anchors the film with fiery tenacity, making Max’s evolution believable and heartfelt. Both Moura and Diego Luna, playing another one of Max’s former compatriots who feels he needs to help him overcome his illness no matter what the cost, deliver outstanding supporting performances, and while their respective characters aren’t exactly well developed, each makes enough out of them to warrant praise. Copley is fine as Damon’s psychotic doppelganger and chief foil, while Fichtner is suitably smarmy as the snobby corporate stooge looking to cash in. Finally, Braga is deftly understated as a driven mother inching ever closer to the end of a very short rope, making Frey a character worth rooting for in the process.

The exception? Shockingly, it’s Foster, the dynamic Oscar-winner phoning in her performance as Elysium’s security chief. She’s stiffly wooden, talking in a weird, flatly affected accent that’s instantly annoying. On top of that, it’s almost as if the movie hasn’t the first clue what to do with her, the character’s arc a bizarrely unfocused one building to a scene between her and Frey that goes nowhere and adds nothing to the dramatic content at the center of the film. 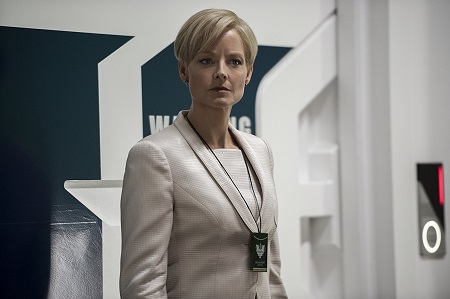 All that being so, Blomkamp once again shows he is a director of passion, vision and tenacity, keeping things moving at a breakneck pace even as he goes out of his way to try and infuse his sci-fi adventure with intelligence. The movie is stunningly photographed by Trent Opaloch (upcoming Captain America: The Winter Soldier), the cinematographer giving the proceedings a visual sheen that’s intriguing. It’s incredibly well made, top to bottom, and considering it also has something on its mind and isn’t content to deliver a series of nonsensical explosions this isn’t a facet I can take for granted.

Elysium is far from perfect. Its messaging is obvious, delivered with a didactic forcefulness that’s obnoxious. Yet I was never bored, not for a moment, and even though I knew everything that was coming and was never surprised, to say I was continually entertained wouldn’t be too far off the mark. Blomkamp’s film has merit, and maybe subsequent viewings will help me to see just how much of it in total there is. 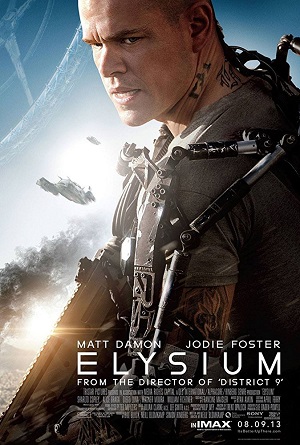