Emergency smacked me in the face. Director Carey Williams and screenwriter K.D. Dávila deliver a knockout comedic thriller that frequently plays like an astute, intelligently multifaceted melding of Alfred Hitchcock’s The Trouble with Harry, Todd Phillips’s The Hangover, and Carlos López Estrada’s Blindspotting. It’s an aggressively pugnacious motion picture, one that repeatedly pummels the viewer with its incisively complex social commentary, while at the same time playfully tickling their funny bone with one laugh after another.

College seniors and best friends Kunle (Donald Elise Watkins) and Sean (RJ Cyler) are about to enter into a rambunctious night of revelry when, before they can even get in the van to go to their first party, they stop at home to discover a nameless girl (Maddie Nichols) drunkenly passed out on their floor. After confronting their equally clueless roommate Carlos (Sebastian Chacon) as to what is going on, the trio quickly concludes that they cannot call the police, the visual of two Black men, one Latino man, and an unconscious white female in one room potentially strange enough to get them killed.

Just down the block at a local fraternity, Maddy (Sabrina Carpenter) discovers that her younger sister has vanished. She was so busy whooping it up that she forgot to keep an eye on her underage sibling. With best friend Alice (Madison Thompson) and helpful himbo Rafael (Diego Abraham) lending their assistance, Maddy sets off to find her sister, tracking the teenager’s cellphone to hopefully discover her location.

One bad choice leads directly to another. But Williams and Dávila do a splendid job of showing how each decision is made and why almost all of them make some sort of weird sense at the moment they happen in. While Kunle wants to call an ambulance, Sean’s paralyzing fear as to what might happen to them all if the cops were to arrive on the scene isn’t without petrifying merit. With reality being what it is, it’s easy to see how the three young men could decide to run the incoherent stranger to the hospital themselves, and it’s just as obvious that this determination on their part may prove to be equally catastrophic in the long run.

What’s most startling is that all of this insanity isn’t nearly as outlandish as by it all rights it should be. Dávila has crafted an extreme situation that should feel several steps beyond inconceivable. Yet, that’s far from the case. As broad and as surreal as Williams presents these escalating situations, the true terror is that everything that ends up happening comes across as uncomfortably plausible. The ending is particularly unsettling. Part of me wanted to avert my eyes away from the screen while the rest of me couldn’t have been pulled away from learning what was going to happen next even if my life depended on it.

Bits of the subplot involving Maddy trying to find her sister come across as slightly forced. But Carpenter is excellent as the clueless collegiate “it” girl who always gets her way and who is suddenly asked to look in a mirror and witness firsthand how unattractive her entitled selfish shenanigans are. Dávila saves one of the best jokes for her, the moment as big a condemnation of Maddy’s tiresome actions as it is a celebration of Kunle and Sean repouring the foundation of their friendship.

Watkins and Cyler are outstanding. The ins and outs of their iron-clad bond are readily apparent from the first second they share the screen. But the micro-fissures putting pressure on that friendship are hinted at long before they find a girl passed out on their floor in a pool of vomit, and they become increasingly noticeable and more severe as Kunle and Sean pull out all the stops to get her to the hospital.

This makes what the actors accomplish even more impressive. Watkins and Cyler stay likable and their characters are worth rooting for even when they make the most unconscionable of decisions. There is a hard-earned truth to what each actor is doing, both showcasing fearless perseverance in their body movements and vocal inflections as the situations Kunle and Sean are mixed up in spiral out of their control.

I wish Chacon had a bit more to do, but he does have a couple of nice scenes during the third act that hammer home many of the film’s central themes regarding identity and social injustice with amusing authority. There’s also something to be said about the actual climax and the way Williams’s direction becomes far less creatively dexterous and slightly more didactically heavy-handed.

Still, considering where events end up this may be appropriate. Dávila’s script goes right to the edge of tragedy and refuses to pull a single punch. The pitch-black humor gives way to icily chilling dramatics, the terrifying ramifications of all the confusion, coincidence, and mistaken identities leading to a gut-punch of a finale that rocked me sideways. Emergency rages against the status quo with fiery imagination and shrewdly perceptive resolve, it’s screeching tires of revolution a clarion call of societal change viewers should take the time to listen to. 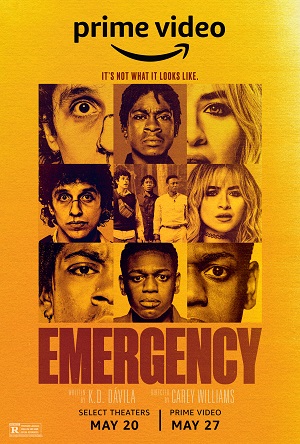