There are numerous problems with Ender’s Game, writer/director Gavin Hood’s (Tsotsi) ambitious adaptation of Orson Scott Card’s influential 1985 science fiction favorite, not the least of which is its muddled moralistic center and waveringly hesitant point of view. But there are almost equally enough merits, including strong performances from a generationally diverse cast (which includes relative newcomers like Asa Butterfield and Hailee Steinfeld as well as seasoned veterans like Harrison Ford, Viola Davis and Ben Kingsley) and a creatively imaginative visual design setting the film apart from the typical young adult fantasy-adventure crowd. It is, in its own way, a movie at war with itself, and as such grows increasingly perplexing as things progress to their expectedly ambiguous, and of course sequel-hinting, conclusion. 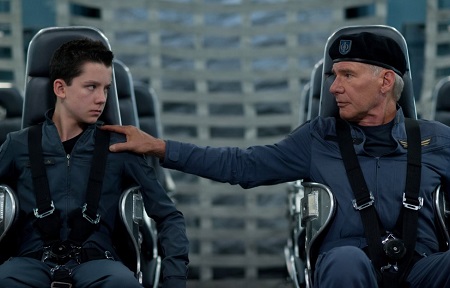 Set in the near future, the story revolves around Ender Wiggin (Butterfield), a third son of a patriotic family who according to Colonel Graff (Ford) has the making of a true master solider, a field general armies will follow into battle and enemies will be unsympathetically demolished by. You see, decades prior the planet was attacked by a hostile race of insect creatures known as the Formics, and while humanity was victorious it is expected this violent, carnage-seeking menace will return. It is believed by those in charge future wars must be fought be children, their ability to adapt and understand, coupled with their ease with new technologies, makes them the key to success, finding the right leader to wage these battles Graff’s and his aid Major Gwen Anderson’s (Davis) chief mission.

Elements of Robert A. Heinlein, Isaac Asimov, Ray Bradbury, Joseph Conrad and even George Lucas abound, the film version of Card’s novel adlibbing freely from science fiction royalty of every color and stripe. Hood mines this territory with confidence, never wavering as far as his stylistic choices are concerned keeping a somber, almost reverentially dour tone throughout no matter what it is that is happening to Ender at any one time. Even moments of joyful experimentation are colored through a tragically elegiac lens, the full thrust of what it is exactly Graff is working so diligently to transform these children – all are in their mid to early teens – into never lost for a second.

At the same time, as a viewer this sadistic, almost fascist, close to sociopathic, form of continual militaristic brainwashing grows more uncomfortable as the film progresses. It is almost as if the filmmaker watched Paul Verhoeven’s tongue-in-cheek, highly cynical, deeply satirical take on Heinlein’s Starship Troopers and took it seriously, feeling as if he could up the ante by spelling it out exactly and absolutely that the conversion of youngsters into warmongering monsters in the name of a nebulous ‘greater good’ is perfectly acceptable.

Whether it is or not I am not the one to say. Whether I find the watching of such a thing for almost two hours entertaining, however, is a decidedly different matter entirely. Five minutes of ethical reconsideration just doesn’t feel enough to me in regards to the sheer volume, size and scope of the potential genocide being discussed, debated and maybe even acted out by the kids pulling the trigger. There is no light in this darkness, no sense of hope, and while showcasing the painful miseries of war isn’t a bad thing – a very good lesson for kids to take note of, in my opinion – being beaten over the head with didactic ferocity isn’t my personal cup of tea. It’s never entirely clear if Hood is embracing this ideology or condemning it, the action-filled spectacle belittling any chance of an honest, intelligently complex discussion at virtually every turn.

But, even with so much it’s culling from, even with so many similar styled adventures having hit theatres over the past handful of years, Ender’s Game looks incredible, Hood and his team offering up an impressive visual milieu that had me continually intrigued and fascinated. There are also some great bits of verbal wit and flair that caught me oftentimes by surprise, Butterfield underplaying his character beautifully while Ford chews scenery with the requisite grizzled crustiness. Steinfeld, better here than she thankfully was in the ill-fated Romeo & Juliet, is also solid, while a sublime Abigail Breslin pops up in a key role as Ender’s older sister adding a bit of humanistic grey area shading the majority of the film sadly lacks.

I appreciate Hood’s singularity of vision, and the fact he convinced a studio to give him this much money and freedom to craft what is essentially dour militaristic spectacle sociopathic brainwashing of children is rather astonishing. You get the feeling they were under the impression this could be some sort of interstellar Hunger Games, another young adult franchise depicting the cost of war in a way that is still exciting and cheer-worthy while at the same time honestly assessing the painful tragic sacrifice revolution and conflict generate no matter of the conflict’s worthiness (or lack thereof).

I just wish there was some sort of balance, some nuance of insight. Ender’s Game looks incredible, and the cast does their collective best, but the bad taste left in my mouth after it came to an end was unavoidably loathsome. Having never read Card’s novel I don’t know if it is inherent to the book or not (or if the author’s much debated personal views regarding gender and sexuality factor into any of this, either) or is a facet of the adaptation only. Not that it should matter, a film needs to stand on its own source material be damned and suffice it to say Hood’s take doesn’t measure up, falling short as both social commentary and as entertainment making it another 2013 disappointment destined to be forgotten before the year comes to its end. 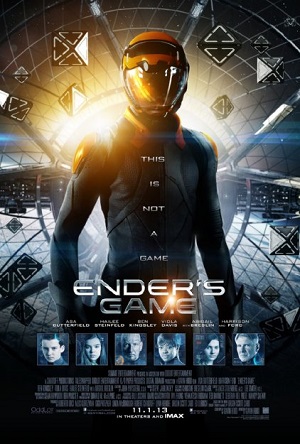