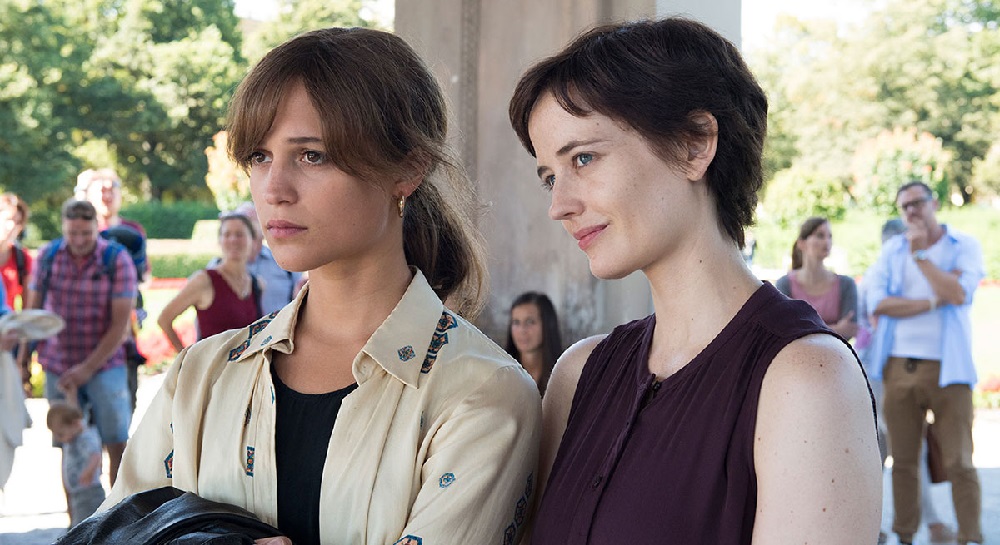 Estranged sisters Ines (Alicia Vikander) and Emilie (Eva Green) reunite after years apart for a mysterious European adventure. After a night in a swanky hotel the pair go on a road trip, their driver leaving them in the middle of nowhere where they are met by the enigmatic Marina (Charlotte Rampling). She proceeds to walk them through the woods to their final destination. Turns out, Emilie is not getting ready to return to college and this trip isn’t meant to be a fun sojourn before classes begin. Instead, she’s brought Ines to an expensive estate where residents, all suffering from a terminal disease, can end their lives within six days of arrival if they choose to do so.

That’s right. Emilie is dying from cancer. She hopes that by bringing her sister with her the two of them can reconcile before there’s no longer a chance for them to do so. While Ines is initially furious at her older sibling, after walking around the estate and speaking with a few of the current residents she decides to stay. As the days progress the two women begin to rehash events from their past including being abandoned by their father and the death of their mother. They also get to take stock of their own damaged relationship, both Ines and Emilie learning things about one another neither knew until now.

With that premise, it’s safe to say that Swedish filmmaker Lisa Langseth’s first English-language drama isn’t exactly a light, frothy excursion into sibling dysfunction. Reteaming with Vikander for the third time, the pair previously joining forces on the dramas Hotel and Pure, it doesn’t take long for this movie to hit the viewer right in the face. Even early on during a brief prologue-like sequence showing Ines and Emilie reuniting, checking into their hotel and then sharing a gourmet meal, it’s still obvious something more ominous is going on. The former doesn’t appear to believe her sister when she states she’s gotten all this money after selling her home. The latter is trying so hard to put on a happy face it’s readily apparent she’s not doing a great a job concealing what must be a pretty major secret.

It’s still a rather major gut-punch when Ines and Emilie meet up with Marina and get checked in at their secluded destination and the truth of why they are on this trip together is coldly, almost clinically revealed by the establishment’s otherwise friendly and composed concierge Aron (Adrian Lester). The younger sister’s reaction to learning the truth is brutally understandable, Langseth giving Vikander the freedom to angrily explode over being left in the dark for so long about her older sibling’s medical condition. But the director also allows cinematographer Rob Hardy’s (Annihilation) camera to linger on Green as her character takes everything in. More is said about the sisters and their relationship by the subtle emotional maneuverings of the actress’ face than almost anything the two say to one another out loud, the inherent power of this pivotal moment augmented considerably because of this.

While the focus tends to be on Ines and her reactions and responses to all she sees, hears and experiences while at the euthanasia clinic, it is those moments where Emilie is spotlighted and her interactions with some of the other residents are emphasized that prove to be the most indelible. There is a lovely, touchingly poignant subplot involving her and a paraplegic guest (Mark Stanley) that brought me to quietly eloquent tears, the hopeful, unrushed tenderness of their time together as honest an assessment of these various characters and their hauntingly personal choices as anything I could have hoped for.

For Ines, her primary interactions are with Marina, who resolutely refuses to give clear direction as to how the younger sister should handle this situation other than to insist she put forth an effort to understand what it is her sibling is asking of her, and the mysterious Mr. Daren (Charles Dance), a wealthy older gentleman who is coming to grips with the fact that his pursuit of money and power over lasting relationships hasn’t done him particularly well now that he’s on the verge of facing his final hours A successful artist recently stung by the first bad reviews of her career, Ines also begins to fastidiously document her time at the clinic thinking she might utilize her observations and photographs in her future work.

I like that Langseth refuses to answer a lot of questions. I also respected how she declined to apologize for any of her characters or their actions, specifically Ines. Doing this helps magnify the impact of the film’s closing act. While I’m not entirely sure either sister gets the answers from the other they claim to be longing for, they do achieve a level of meditative, resolute understanding that’s potentially more significant. It allows them to be able to sit in familial kinship in a way they have not been able to since they were children, the ties binding them together even at this tragic hour mournfully long-lasting.

Euphoria isn’t without its missteps and stumbles (as good as Dance is, the entire Mr. Daren subplot is kind of disastrous), but its emotional purity is undeniable, while the superlative performances from Vikander and Green anchor the proceedings in intimately naturalistic substance that’s achingly authentic. Langseth lays her story out with a caring specificity that kept me wanting to learn where things would go next, and for my part I found the character-driven honesty of her drama difficult to resist. 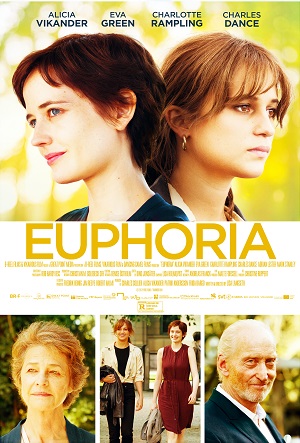