Far from Heaven a Divine Showcase for Moore

Frank (Dennis Quaid) and Cathy Whitaker (Julianne Moore) lead a tranquil, seemingly utopian lives. They’re the face of industry, Mr. And Ms. Magnatech, so engulfed in corporate suburban culture that they blend seamlessly into the vibrant colors of the changing seasons. But beneath this blissful façade lie burning secrets. Frank is rapt with guilt over his homosexual attractions and Cathy believes that the couple’s black gardener Raymond Deagan (Dennis Haysbert) may be the most beautiful man she’s ever seen. Their blissful life together is nothing more than an illusion, and if either of them drops their guard even for a second, it’s likely the curtain concealing their familial strife will be ripped away and the world will suddenly see their marriage for the sham it really is.

Born Hans Detlef Sierck, esteemed director Douglas Sirk arrived in Hollywood in the late 1930s fleeing his native Germany in opposition to the rising power of the Third Reich. Starting with the rabidly anti-Nazi Hitler’s Madman in 1943, Sirk began a career specializing in florid melodramas culminating in a string of successful motion pictures, films like Magnificent Obsession, All That Heaven Allows, Written on the Wind, Tarnished Angels and Imitation of Life, all shot and released throughout the 1950s.

Largely forgotten for the next 20-odd years, it was not until the 1970s and the French New Wave that Sirk’s style once more became popular. Championed by many of the critics-turned-directors of the period, the filmmaker was cited as a major influence time and time again, especially by the French auteur Rainer Werner Fassbinder (In a Year of 13 Moons, Querelle).

Why the history lesson? To fully appreciate Todd Haynes’ brilliant Far From Heaven I think it is important to know about Sirk and his history. Additionally, it is also likely vital to have an understanding of the type of melodrama that was in vogue during the 1950s, as well as the cultural mores and topics those films could safely address.

Haynes is fast becoming one of the most original and vibrant filmmakers working on the American fringe. From Superstar (the Karen Carpenter story told with Barbie Dolls; if you can find it, see it) to Poison to Safe to Velvet Goldmine, the director has fashioned himself a solid niche as an iconoclastic risk taker willing to delve into stories and subjects with impressive ferocity.

Here he’s taken a ‘50s filmmaking style and made it inherently own. Without condescending or looking cheekily back on this period in history, Far from Heaven is a motion picture made as if it had been shot and edited during the era it is set. But whereas Sirk would never have dreamt of dealing with subjects as contemptuous as interracial dating and gay sex, Haynes looks at them both under a melodramatic microscope, revealing the hypocrisy and murky deceptions resting just beneath the seemingly Rockwellian surface.

The gifted cast the director has assembled is up to the task. Quaid continues his recent string of strong performances and emerges as a real threat for double Oscar nominations (lead actor for The Rookie, a supporting nod here) with his bravura turn. Also quite good are Haysbert and Patricia Clarkson, playing Cathy’s best friend Eleonor. The former shines as the proud single father drawn to Cathy whilst the later breaks hearts with her reactions to her girlfriend’s confessionals, her horrified rejoinder at what she deems the more poisonous of the two revelations bone-chilling.

While all three are terrific in their respective roles, it is Moore who shines brightest. One of the best actresses working today, she is a few steps beyond stunning as Cathy Whitaker. Maybe it is working with Haynes that can’t help but bring out the best in Moore, her work in the director’s powerful Safe a previous high. This role is fraught with numerous perils and hardships, the line between dramatic insight and unintended camp exceedingly thin. The actress handles all of what is asked of with magnetic aplomb, the ease in which she slips into Cathy’s skin extraordinary.

The rest of the film is equally glorious. Edward Lachman’s (The Virgin Suicides) lush cinematography pops off the screen, distinctly echoing the Sirk influences Haynes is emulating. Renowned composer Elmer Bernstein (Sweet Smell of Success, The Magnificent Seven), no stranger to 1950s melodrama with a career spanning over five decades, provides a score so wondrous the movie would feel empty without it. Also worthy of note are Sandy Powell’s (The End of the Affair) gorgeous costumes, Mark Friedberg’s (Kate & Leopold) stunning production designs and Hildie Ginsberg’s colorfully lush period makeup.

The only quibble I could potentially make is that maybe the time for this style of filmmaking has come and gone. This is a motion picture created and put together as if Haynes was actually working in the 1950s, and that aesthetic eschews the rapid-fire patterns and short attention span platitudes of many modern cinematic narratives. Not that I remotely care. As a film guaranteed to impress and absolutely assured to make an audience think, Far from Heaven is nothing less than divine. 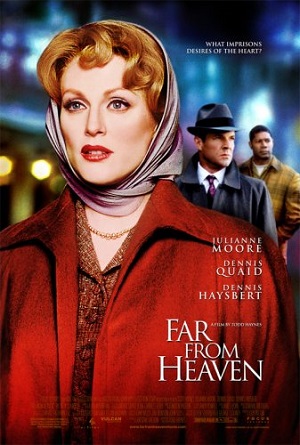