Sidonie Laborde (Léa Seydoux) reads for her Queen, the flighty French monarch Marie Antoinette (Diane Kruger). She adores her job, and even though there is gossip of an uprising amongst the people of France Sidonie’s desires to please have not diminished one single bit.

The Bastille has been overrun. A list has been put forth of all those that the revolting masses feel should lose their heads to the guillotine. The first name is Antoinette’s. The second her good friend and assumed lover Gabrielle de Polignac (Virginie Ledoyen). A request is made, one with potentially tragic consequences for Sidonie, putting the young woman’s faith and trust in the Queen to the test while also revealing to the lady-in-waiting a side of Marie Antoinette she’d previously refused to believe existed.

Based on the book by Chantal Thomas, Farewell, My Queen is a mesmerizing drama of palace intrigue and romantic subterfuge directed with supreme confidence by Benoît Jacquot (A Single Girl). The movie is propelled forward as if by some mysterious energizing force, every moment oozing with a sinister menace that’s always held just off of the screen as if it were lurking on the periphery of the frame. Seen almost entirely through Sidonie’s beautiful eyes, the young woman’s soulful gaze slowly moves from wonderment to adoration to blind faith to sad, mournful understanding as events build to their climax. There is a heart-stopping breathlessness to her journey I found enthralling that is beyond intimate, beyond visceral, the all-consuming passions that will tear a country apart on full display.

I loved the first hour of this movie. I was struck by both Seydoux’s and Kruger’s performances, discovering I couldn’t take my eyes off either of them. Both actresses make their characters in a way that feels vibrant and alive, the former in particular. Seydoux travels down a number of interior boulevards, heading to silent plateaus where shocked understanding isn’t showcased in the words Sidonie says but instead in the mournful expressiveness of her eyes.

There are issues. At just over 90 minutes, the film almost feels far too short for its own good. The final sequences rush by, Antoinette’s request to Sidonie having a fantastic impact that’s sadly somewhat lessened as horse is connected to buggy and carriage begins to travel down an uncertain road. Her final revelations, while powerful, don’t resonate as they might have had Gabrielle de Polignac been built up as a more complex character instead of an ethereal enigma who floats in and out of the story as if she were a dream. The last scenes just sort of happen, I find it difficult to find any other way to describe them, and the only reason they have the emotional impact that they do is entirely thanks to Seydoux’s stunning performance.

That these issues do not matter as much as they probably should is a testament to the two actors at the center of the drama as well as to Jacquot’s skillful direction. Farewell, My Queen presents a side of the French Revolution I’ve never thought to ponder, this look behind the gates of Versailles oftentimes fascinating. There is truth to be found in lurking underneath the rotting entrails of Marie Antoinette’s debauchery and excess, Sidonie’s journey one where the heart rules the immediate action yet also one where the head ultimately nakedly sees things for as they truly are. 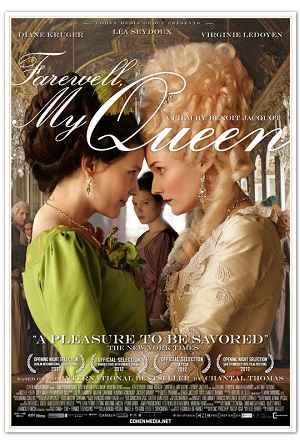