Argentinian supernatural horror yarn The Funeral Home is a textbook example of style over substance. Some of writer/director Mauro Iván Ojeda’s subtler designs for the material may have been lost in translation, but considering how simplistic this story of ghosts and demonic possession turns out to be I have trouble believing that’s the case. But thrills are plentiful, and the general aura of unease that permeates this film is undeniable, all of which makes this saga of terror-filled familial dysfunction far more wickedly captivating than it has any right to be.

Bernardo (Luis Machín) has taken over running the family funeral home. He lives on the secluded estate with his wife Estela (Celeste Gerez) and estranged stepdaughter Irina (Camila Vaccarini). Residing there with them are several ghosts, which all things considered isn’t much of a surprise. Local medium and psychic Ramona (Susana Varela) ensures the family there is no danger as long as they all follow a few simple rules, and other than their personal issues there shouldn’t be any reason for worry.

Not so fast. Turns out, there’s another presence lurking on the estate and it’s not altogether friendly. It’s a demon, and slowly it has been silencing all of the other spirits until it is the dominant presence. This entity is here for one reason and one reason alone: to kill Estela and Irina. It has been building up its strength to complete this task. Tonight it will attack, and although Ramona is there to protect them, even she is uncertain whether or not any of the family will survive until the rooster’s crow signaling a new dawn.

There’s more to it, but Ojeda doesn’t spend a ton of time focusing on any of the other components in any great detail. Bernardo is still mourning the death of his father. Estela is a frazzled mess who numbs herself with prescription pills. Irina blames her mother for the death of her father and wants to go live with her grandmother (Graciela Bonomi), a master manipulator who loathes her daughter-in-law and wishes her ill.

These elements are all key pieces to assembling the final puzzle, but Ojeda never fleshes them out in a meaningful way. They’re window dressing, extra elements giving the demon additional power against Ramona in her attempts to keep it at bay. I needed to know more, especially as it pertained to the relationship between Irina and her grandmother, an emotional connection between the characters frustratingly out of reach for the majority of the film.

But what Ojeda’s shocker lacks in depth it more than makes up in style. He creates a mood of palpable uneasy dread from the start, allowing it to fester and grow right up to the point the demon launches its murderous attack. The director allows each scare to generate at its own languid pace, lulling the viewer into a false sense of security that they know how he is going to try and startle them based on the slyly seductive manner in which he does so early on.

This is not the case. Once Ramona sets the ground rules all bets are immediately off. Ojeda speeds up the pace, the editing becoming increasingly frenetic as things speed to their conclusion. The demon takes no prisoners, gleefully playing macabre tricks on the survivors while cutting its first few unlucky victims to gruesomely bloody shreds. The visceral intensity of it all jangled my nerves something fierce, the entire last act a kinetic kick to the head that had me sitting on the edge of my seat.

All of which makes the quiet, somberly intimate climax something of a slight surprise. There is a note of empathetic understanding and hopeful forgiveness that feels somewhat at odds with the abhorrent nihilism of all that directly proceeded it, and I’m not entirely certain Ojeda earns the cathartic ballet of joy he’s attempting to build towards. The connection between these characters is just too ephemeral for moments like these to resonate as strongly as I hoped they would, and as such I can’t say the final moments did a heck of a lot for me.

Not to say Ojeda isn’t talented or that The Funeral Home isn’t worthy of a look. It most certainly is, the climax showcasing the demon’s attack on Bernardo, Estela, Irina and Ramona worth the price of a VOD rental by itself. As for the director, his skills behind the camera are undeniable. It’s his storytelling I hope he spends a bit more time working on. Once he does that, I won’t hesitate for a second to bury myself in whatever tale he wants to tell next the moment he opens the crypt and allows me to lay down and do so. 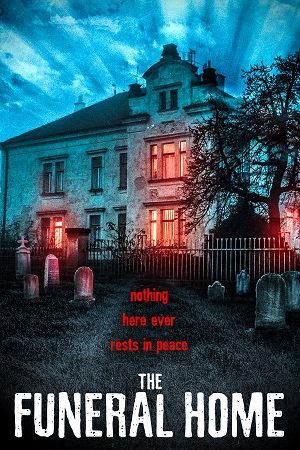