Rebekah McKendry’s monstrously entertaining Glorious is one of the more innovative and original horror comedies I’ve seen in quite some time. A heady mixture of science fiction, social commentary, and gory Lovecraftian weirdness, this two-character slice of existential insanity is like an episode of The Twilight Zone mixed with EC Comics’ Tales from the Crypt as filtered through the perversely perceptive sensibilities of filmmakers like Larry Cohen or Frank Henenlotter. This film is terrific.

Wes (Ryan Kwanten) has just broken up with his girlfriend Brenda (Sylvia Grace Crim), and he’s falling to pieces over what happened between them. Having hit the road, he spends the night at a secluded rest stop, waking up the next morning covered in his own vomit and nursing a hangover. Making matter worse, the bathroom door is jammed, and he’s locked in with no way to call for help.

Then there is the authoritatively friendly voice (J.K. Simmons) attempting to chat with Wes from one of the bathroom’s two stalls. Calling himself “Ghat,” this individual appears to know so much about him that the young man begins to question his own sanity. Even more bizarre, Ghat proclaims he isn’t a man, that he isn’t even human, but rather a glutinous god who will consume all of humanity once he has fully materialized into his hideous corporeal form, and it is up to Wes — and Wes alone — to stop him.

What follows is an increasingly perverse conversation between the two, in which they discuss nothing less than — to quote Douglas Adams — life, the universe, and everything. They must understand the nature of sin and the power of goodness, each trying to fathom what has led them both to this one place at this one time. Was it fate? A higher power? Or just a surreal coincidence? Whatever the reason, they need one another, and if Wes is unwilling to make an unfathomable sacrifice, they will each be responsible for unleashing a terrible apocalypse upon the earth.

Kwanten is outstanding. He hasn’t had a role this good since the first few seasons of HBO’s True Blood, in which he routinely stole scenes from his well-known co-stars. Wes is a complicated lost soul, one whose misdeeds and mistakes have convinced him that he is beyond redemption. Kwanten brings self-effacing humor to his portrayal, which isn’t exactly surprising, but also adds a layer of introspective pathos, anger, and pain that somewhat is.

Simmons’ vocal performance is equally superb. Ghat knows what it is and, more importantly, what it will become if its growth into a being of unimaginable destruction is allowed to proceed unabated. It understands it’s evil. But Simmons digs into the sorrow of an existence built only on destruction.

Still, while Ghat can be authoritative and commanding, it can also be empathetic and nurturing. The Oscar-winning Simmons makes all of these facets of the god’s personality come alive with endearingly goofy conviction and such effortless panache that his performance borders on spectacular.

It’s clear the budget was rather minimal, but that doesn’t stop McKendry from dreaming big and at least making a valiant attempt to get her completed vision up on the screen. While some of the effects can’t help but fall a little flat, others are so well realized that they are nearly extraordinary. The director also does not skimp on the gore, and the practical makeup effects and CG visual enhancements have a retro quality that reminded me of Rob Bottin’s work on The Thing or Tom Savini’s iconic designs for Dawn of the Dead.

The conclusion isn’t going to sit well with everyone. McKendry keeps things moderately ephemeral, letting the audience answer most of the big questions on their own, without too much in the way of concrete input from either of the main characters. But this worked just fine for me. I like that the question Wes asks near the end and the answer Ghat responds with are hard, somewhat bleak, and entirely genuine in their depressive certainty.

As gruesomely hysterical as much of Glorious may be, the foundation of toxic masculinity it’s built upon is anything but silly, McKendry giving it the brutally grisly evisceration it deserves. 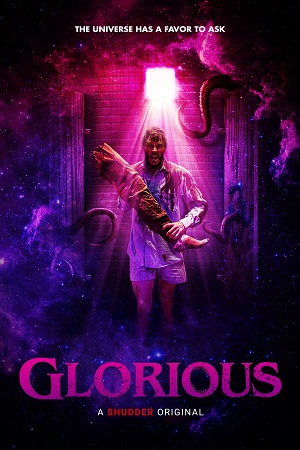