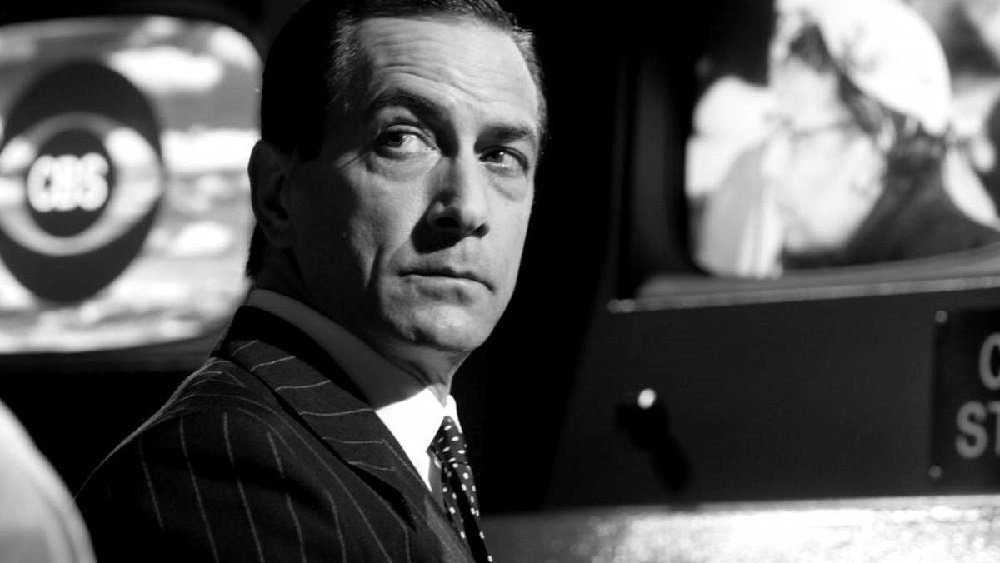 It is 1953. The Cold War is raging. Senator Joseph McCarthy is in the midst of his single-minded, self-serving crusade to rid the United States of communists. If you were not with the junior senator from Wisconsin, you were against him, and to be against him meant you, too, were a target of his venomous attacks which would effectively ruin your life.

It is still 1953. Television is in its infancy. Networks are trying to figure out what to do with their news departments, unsure of how to balance the public’s need to know within the confines of corporate constraints of selling products to consumers. At the top of the broadcast journalism pyramid is Edward R. Murrow (David Strathairn), anchor of the popular CBS news documentary show “See It Now.” With producer Fred Friendly (co-writer/director George Clooney) at his side, Murrow decides to do what no one else reporting the news has had the guts to do. He will take on McCarthy head-on and, in doing so, will change the course of history and become a television journalism legend in the process.

Good Night, and Good Luck. is the must-see event picture of the Fall. It is breathlessly exciting, reexamining with acute detail a moment in our nation’s history that should not, cannot, be forgotten. Director Clooney outdoes himself, proving to be a multitalented artist capable of far more than just assembling superstars for big budget Hollywood remakes or disaster relief telethons. To put in plainly, Good Night, and Good Luck. is the year’s best motion picture.

Filmed in glorious black and white by Robert Elswit (Punch-Drunk Love) and intercutting actual news footage from the time, Clooney and his team recreate Murrow’s CBS world brilliantly. Reporters Don Hewitt (co-writer Grant Heslov), who would go on to create “60 Minutes,” and Joe Wershba (Robert Downey, Jr.), tragic CBS news anchor Don Hollenbeck (a tender and soulful Ray Wise), CBS number two Sigfried ‘Sig’ Mickelson (Jeff Daniels), head-man William S. Paley (a fabulous Frank Langella), all of them are showcased here. The entire cast give stinging, bouncily realistic performances that add urgency to Murrow’s quest in taking on McCarthy, the dangers to all of their careers and to the network a palpable mist that constantly hovers around all of them.

It is an unfortunate truth that the majority of those my age and younger do not know who either Edward R. Murrow or Senator Joseph McCarthy are. Even with that being the case, this movie should not be viewed as some sort of tired, rudimentary history lesson. In documentary-like fashion Clooney recreates the events of 1953-54 in minute detail. Like similar great journalistic thrillers like All the President’s Men or Shattered Glass, this one tackles a historical event with visceral kinetic urgency, all of which takes on even greater resonance when viewed through the lens of today’s fast-paced, everything on-demand 21st century world.

This is still history, of course, important history at that, so there is no harm in reminding people of their importance to the continuation of American democracy. McCarthyism was a destructive force ripping the United States apart. The courage Murrow, Friendly, their reporters and even CBS itself showcased to bring down McCarthy was nothing less than incredible. The Senator was a wannabe demigod, and it’s difficult not to wonder if we’ll ever see that kind of classy grit and fastidious determination that was required to facilitate his fall from grace from the people delivering our news ever again.

This movie would be nothing without the titanic performance of Strathairn. There are plenty of great actors here (the interaction between Downey, Jr. and Patricia Clarkson is particularly wonderful), but there is no question this is a singular showcase for the gifted character actor. Twirling Murrow’s trademark cigarette like a sledgehammer and looking to everyone as if the weight of the world were on his shoulders, Strathairn captures both the journalist’s essence as well as his exacting passion to deliver the truth. More than an impersonation, he becomes Edward R. Murrow, each wrinkle of the brow, twist of the lip and twitch of the eye allowing the audience special insight inside the newsman’s head.

Clooney’s handling of things is magnificent. The pacing is quick, but not hurried. The drama is heightened, but not stilted. The merging of the actors with footage of historical subjects is fantastic. Everything comes together beautifully. Confessions of a Dangerous Mind, even with its flaws, marked Clooney as a director worth keeping an eye on. This feature cements that assessment. Not since Clint Eastwood has a major A-level movie star shown this much aptitude behind the camera, and I can’t find a reason not to think that when Clooney’s leading man days are done he’ll still be making pictures everyone will stop in their tracks at the water cooler to talk about and discuss.

“We will not walk in fear, one of other,” said Murrow. “We will not be driven by fear into an age of unreason, if we dig deep in our history and our doctrine, and remember that we are not descended from fearful men. Not from men who feared to write, to speak, to associate, and to defend causes that were for the moment unpopular.”

Good Night, and Good Luck. is a reminder of dangers to democracy when those in authority selfishly and improperly wield their power. It is also a testament to the enduring clout of a free press when determined journalists choose to doggedly pursue a story ethically no matter what the personal cost. What with hurricane’s ravaging coastlines, a war fought under false pretenses and two major political parties fighting an ideological battle that’s ripping the country in half, these reminders are more important than ever. 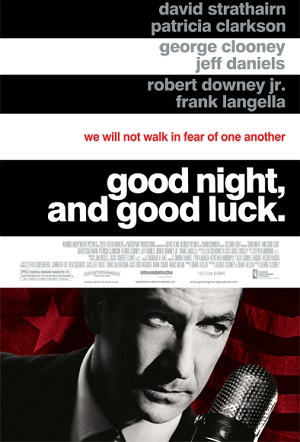