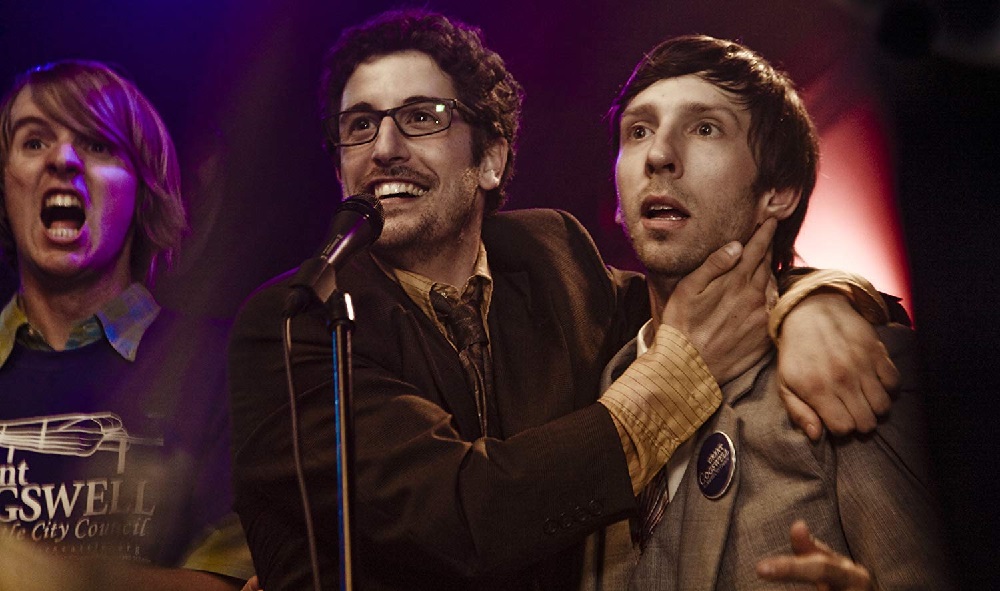 After Phil Campbell (Jason Biggs) loses his job writing for Seattle’s alternative weekly newspaper The Stranger, he is approached by friend and unemployed music critic Grant Cogswell (Joel David Moore) to run his campaign for City Council. He’s passionate about the environment the city and most of all a monorail proposal that would link each corner of Seattle together quickly, cleanly and without the use of automobiles. His opponent, the only African American on the council, Richard McIver (Cedric the Entertainer), is a diehard supporter of adding more lanes to the highways and in constructing a link light rail system, all things Grant vehemently opposes. To say they are at odds on the matter would be a massive understatement.

Having lived through these events, it’s simple for me to see the comedic political drama Grassroots through Seattle-colored glasses which makes it easier to overlook many of its flaws. For every misstep, and there are plenty, for every wrong turn, and there are a few, the movie understands the city, its people and the way we who live here view things, especially politics, rather clearly. It recognizes our idiosyncrasies, all of which helps make the resulting motion picture far easier for a Seattleite to enjoy than is potentially the case for a viewer living in someplace like Tucson, Arizona or Tallahassee, Florida.

But maybe not. These sorts of political stories, the way community advocates and activists rise up to take on the status quo and try to speak truth to those currently in power, are a dime a dozen and typically universal. Just in the past couple years we’ve seen the rise of both the Tea Party and Occupy Wall Street, and no matter what you think of both of these entities one does have to admit that, in the beginning at least, their development wasn’t initiated by those with either money and/or power. Granted, certainly in the case of the former, maybe not so much (if at all) in the case of the latter, this has changed over the past few years, moneyed interests co-opting those they see as a threat in order to put them to use to achieve political agendas far afield from what was originally intended.

Director Stephen Gyllenhaal’s (Losing Isaiah) film, adapted from Campbell’s memoir by Gyllenhaal and co-writer Justin Rhodes (Contract Killers), is moderately entertaining for the majority of its brief 97-minute running time. Phil’s journey from angry everyman to driven political operative is a solid one, watching him gain confidence as he helps build Grant into something of a minor political force sublime. Biggs inhabits the role with ease, bringing out nuances I’m not entirely sure were present in the script. His performance goes beyond what we’ve seen in American Pie, hinting at a depth, a passion and a dramatic confidence I’m not entirely sure he’s ever showcased before now.

The movie doesn’t always work, and while I appreciate that Moore was cast way against type Gyllenhaal never quite seems to know entirely what to do with him. Some of his speeches and diatribes are zealously delivered, full of the vim and vigor necessary for the character to go from nobody to political upstart ready to usurp McIver’s throne. But at other moments he comes across like nothing more than a petulant child, a whiny brat no one in their right mind would listen to let alone follow all the way to the ballot box in support of.

I still liked what Grassroots had to say. I appreciated how it made Campbell such a flawed, three-dimensional activist worthy of both pity and admiration. I loved that he wasn’t perfect, didn’t understand all things political right off the bat. Most of all, I loved the way he and his girlfriend Emily (Lauren Ambrose) communicated, that they almost couldn’t put into words what it was they were always feeling about the situation they suddenly found themselves in. There’s something universally endearing about their relationship and I found that captivating, these two emerging as the heart and soul of the movie as events progress towards their conclusion.

Ultimately, the reason this movie works for me has nothing to do with my living in Seattle. My enjoyment stems from liking what Gyllenhaal and Rhodes have to say about the political process and why candidates like Grant Cogswell are so important to the continuing strength of the democratic process. In a world where politicians state corporations are people and close-minded billionaires can spend hundreds of millions on candidates with virtually no restrictions, the fact people like Grant still exist, that groups like the Tea Party and Occupy Wall Street can still arise, this gives me hope that we aren’t headed to a monolithic dark age straight out of 1984. Grassroots shows that, win or lose, hope still exists, and that the tiniest of voices can still be heard if they have the guts to stand before a microphone and have the courage to make their opinions public. 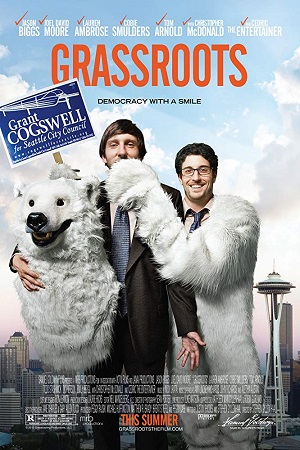