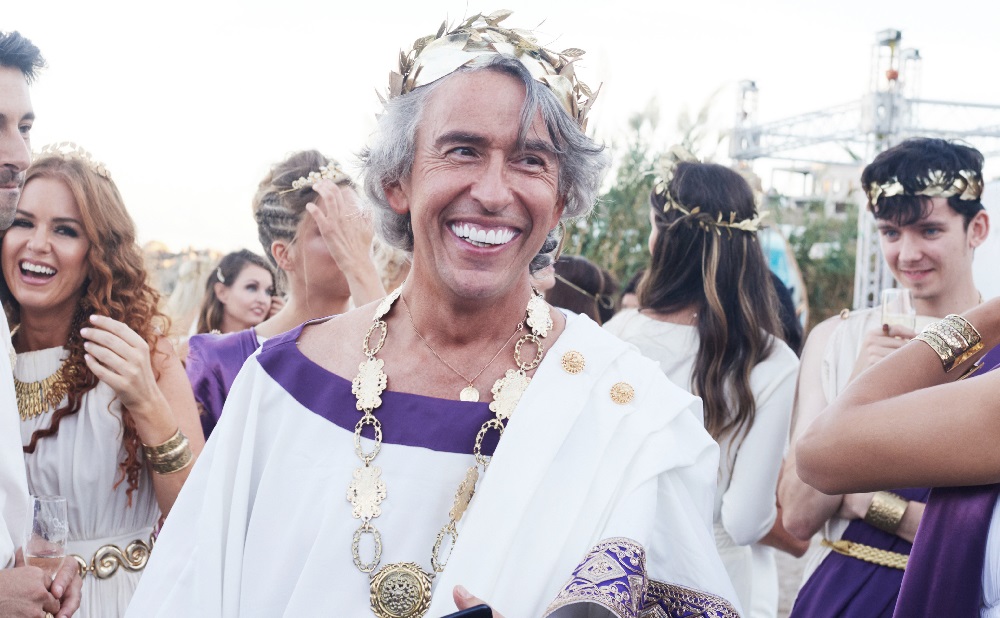 Not to get on Gordon Gekko’s bad side or anything, but Greed isn’t good. Acclaimed director Michael Winterbottom’s frenetic, unfocused social satire is a toothless commentary that to me never felt like it was comfortable inside its own skin. A purposeful mixture of tones and styles, splicing comedic, dramatic and documentary-like observations with wildly frenetic abandon, other than am unsurprisingly superb performance from star Steve Coogan I can’t say I found a ton I liked about this one. As well-intentioned and pointedly prescient as the central scenario is, sad to say this is one film that left me cold.

The story is relatively straightforward. After a public inquiry into his financial dealings by British politicians goes horrifically wrong, self-made retail fashion billionaire Sir Richard McCreadie (Coogan) looks to rehabilitate his reputation by holding a massive, star-studded 60th birthday on the Greek island of Mykonos. There to chronicle things is his nebbish biographer Nick (David Mitchell), the author realizing there’s more to this man’s complicated story than initially meets the eye, and not a heck of a lot of it is what most would consider positive.

With the party as the central cog around which the remainder of the narrative revolves, Winterbottom weaves a nonlinear story of wealth inequality, banking irregularities, political double-dealing, immigration issues and the ugly underground world of worker mistreatment and abuse the fashion industry would rather the general public never see. We get glimpses of McCreadie as a wise-cracking young man (Jamie Blackley) who learns to game the financial system at a young age, his thuggish antics only growing more confidently aggressive as his personal bank account, along with that of his first wife and longtime business partner Samantha (Isla Fisher), continues to grow.

As for that party, it’s a gigantic event where the fashion giant attempts to reenact his favorite movie Gladiator by building a mini Greek Coliseum while also having his staff dress up in slave attire while he, his family and his guests wear the garments of the ruling elite. He gets a giant trained lion to be the center of attention, hires popular musical artists to perform and pays several celebrity impersonators to mingle amongst his guests, making it all look as if McCreadie is more popular and beloved than he actually is.

In some ways Greed is dead-serious. As Nick traverses back and forth between Britain and India, he learns numerous hard truths regarding the dangerous working conditions McCreadie’s garment makers are working under to supply him with the low-cost, faux designer clothes his shops are known for. He also hears stories of egregious manipulations of British tax laws, discovering how offshore safe havens make it easy for the wealthy to hide their assets from the prying eyes of the government.

At other times the movie is a comedic lark, a broadly satirical cartoon that puts an avalanche of potential laughs into a variety of uncomfortably disorienting places. It’s as if Winterbottom is trying to make a Ken Loach-style social commentary crossed with one of his The Trip films (which also just so happen to star Coogan) mixed with one of his more serious fact-based melodramas like A Mighty Heart or Welcome to Sarajevo. But for whatever reason these stylistic choices never coalesce into something insightfully memorable. Worse, even if I agree with much of what the filmmaker is trying to say and feel the inequalities he spotlights need more attention, that didn’t mean I liked being didactically beaten over the head by them as if Winterbottom were wielding a metaphorical sledgehammer.

Not that there aren’t some terrific moments and performances. Even under layers of moderately laughable old age makeup, Shirley Henderson is a riot as McCreadie’s mother, while Fisher has a handful of sensational scenes that reminded me just how good an actress she can be when given the opportunity. Most impressive of all is Dinita Gohil. She plays Amanda, one of the billionaire’s most trusted assistants. But her backstory is tragically complex, and when the truth comes out the chaos this is produced admittedly took me by surprise. Gohil makes all of this come to life splendidly, a scene between her and Mitchell where she reveals her mother’s connection to McCreadie simply breathtaking.

Best of all is Coogan. The veteran actor is in his element as the fast-talking, sincerely double-dealing McCreadie. He balances the serious and comedic elements of the story with more deftly nuanced panache than the actual overall movie itself does. This is a suitably larger-than-life performance that’s more heartfelt and emotionally demonstrative than I anticipated it was going to be, Coogan dominating things to such a degree it’s impossible to imagine what this satire would have looked like without him.

If only all of that were enough. There are just too many elements at play here (I haven’t even mentioned subplots involving Syrian refugees or McCreadie’s daughter “acting” in a reality television show chronicling her romantic life), Winterbottom frustratingly unable to juggle them all as skillfully as he typically does. The drama, comedy, satire and commentary don’t merge into anything meaningful, Greed a stiflingly discombobulated letdown that can’t pay its entertainment bills without going into the red. 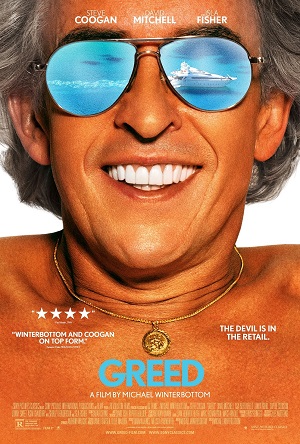