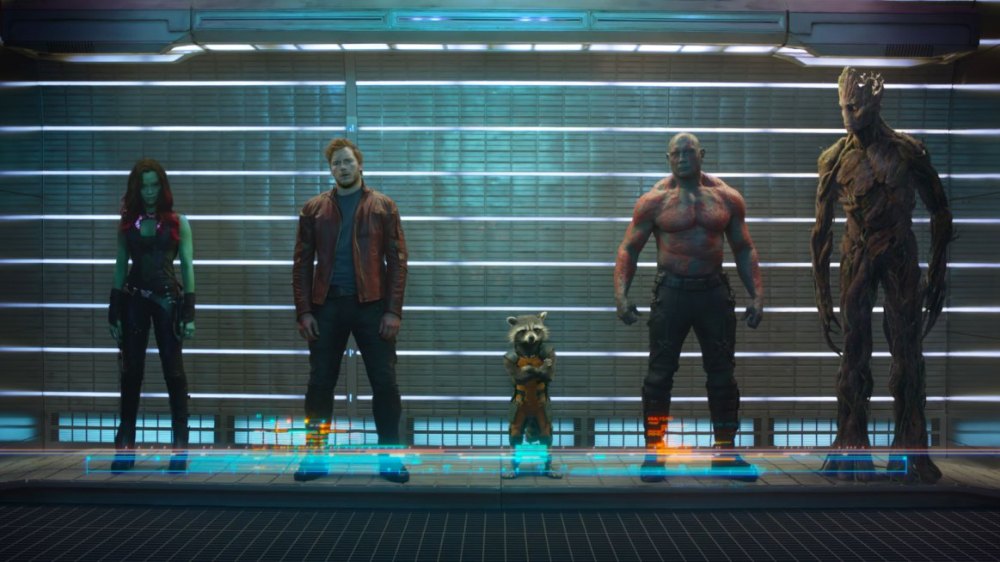 Marvel’s Guardians Reach for the Stars

Marvel’s latest comic book to film endeavor as part of its ongoing, so-called “Marvel Cinematic Universe” or MCU is Guardians of the Galaxy. For those who felt Thor, an action fantasy featuring a Norse God, was a little outside the norm, this interstellar science fiction spectacular featuring a talking tree and a gun-toting raccoon will undoubtedly redefine those feelings. For everyone else who is even slightly well-versed in all things Star Wars, Star Trek or even Flash Gordon, nothing that transpires over the course of the story’s 121 minutes, in all honesty, is going to come as too great a surprise, the narrative following a relatively well-worn trajectory that’s hardly original.

Thankfully, just because that’s so doesn’t make it any less entertaining, cult director James Gunn (Slither, Super) enlivening the proceedings with distinctively ingratiating bits of visual ingenuity and a sideways sense of humor I responded to. He’s also cast the film reasonably well (three pieces of the central quintet particularly noteworthy) making rooting for the titular heroes a heck of a lot easier than it otherwise would have been.

The plot, for as sprawling and as all over the map as it ends up being, is actually pretty simplistic when you get down to it. Almost three decades after being abducted from Earth, adventurer Peter Quill (Chris Pratt) finds himself in possession of a mysterious orb that the most dangerous villain in the Universe, the evil Thanos (Josh Brolin), is looking to get his hands on. Thrown into intergalactic prison with talking raccoon Rocket (voiced by Bradley Cooper), sentient tree Groot (voiced by Vin Diesel), driven warrior Drax (Dave Bautista) and green-skinned assassin Gamora (Zoe Saldana), this crazy, mixed-up group finds themselves on the same side of the coin, teaming together to keep Thanos’ minion Ronan (Lee Pace) from grabbing the orb and thus starting on the road to Armageddon. 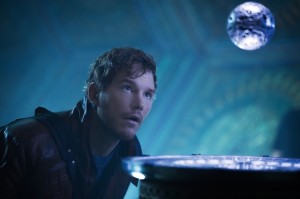 There’s a heck of a lot more going on than just that, not the least of which is the fact Rocket and Groot are bounty hunters out to make a quick buck, Drax is a revenge-fueled madman wanting to kill Ronan for the murder of his family and Gamora is Thanos’ adopted daughter secretly working against him. Throw in the fact Peter is on the run from a group of space scavengers – here nicknamed ‘Ravagers’ – led by whistling demon Yondu (Michael Rooker), and it’s not like going from points A to B to C is a particularly trouble-free affair.

Thing is, as nicely constructed as Gunn and Nicole Perlman’s script (adapted from the source material created by Dan Abnett and Andy Lanningm) might be, that doesn’t mean it has an original bone anywhere inside its celluloid body. Everything builds to a conclusion that’s hardly shocking or original, the core unit discovering family is sometimes what you make it and intelligent teamwork is better than individual brute strength any day of the week. It’s straightforward and obvious, and anyone expecting more has an entirely different thing coming to them.

But what the story lacks in originality more often than not, Guardians of the Galaxy makes up for that fact with unrestrained idiosyncratic chutzpah and nicely modulated character building. Gunn has a knack for off-kilter visuals and uniquely staged action sequences that keep focus on the central dynamics of what is going on and why. Gunn tends to eschew razzle-dazzle just for the sake of it (although there’s plenty of eye candy to relish), and as chaotic and as crazy as things might get, it’s still simple to know who is who and what is going on and why.

Better than that, he allows Pratt, Cooper and Diesel (the latter only allowed to utter variations of “I am Groot” throughout) to craft interesting, three-dimensional characters I honestly cared about. All of them are having a blast and it shows yet that doesn’t stop them from imbuing Quill, Rocket and Groot with notable traits and subtle variations that keep each continually captivating, elevating their story arcs, as well as the film itself, at every turn.

Saldana is fine, but after Avatar, Star Trek and Colombiana she’s getting a little typecast in roles like the one she’s playing here, Gamora nothing more than a Neytiri/Uhura variation that’s hard to get all that excited about. In the case of Bautista, the former WWE wrestler certainly fits the bill physically, bringing a brutish, thug-like menace to Drax that’s intimidating. But charismatically? Sad to say he’s a bit out of his league in comparison to his costars, and whenever the story shifts to focus on him and his plight I admit to more often than not losing a little interest.

On the villain side, Thanos is only here to set up coming evil-doing against the Avengers at an unforetold later date, so he does little more than grin menacingly and bark out a few orders. As for Ronan, Pace has some great individual moments but on the whole his baddie isn’t as irresistibly threatening as he should be. More than that, he’s outclassed by his own minion, Nebula (Karen Gillan), another adopted daughter of Thanos and Gamora’s foster sister, the half-alien, half-cybernetic hellion a blue whirlwind of cunning and skill who I found riveting. 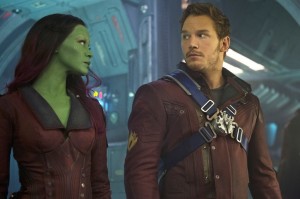 Gunn is a fine director, but as interesting and as personal as many of his choices might be, I can’t help but feel like he’s not been allowed full and total control over everything taking place, Marvel keeping him somewhat in check as they continue to build their MCU trying to keep all their Avengers initiative characters connected. The wild slights of hand and bizarre bouts of captivating quirkiness found in spades in both Slither and Super are more or less absent, and other than a loopy sequence featuring Benicio Del Toro as an eccentric collector of space oddities things remain relatively clear-cut and undemanding throughout.

Still, Gunn shows a personal touch absent from the majority of the Marvel-controlled features, his distinctive style still imprinted upon almost every frame. While there’s no guarantee he’ll be back at the helm for future sequels, the chances other studios will allow him to tackle more original ideas and properties after this are certainly strong. Guardians of the Galaxy takes the Marvel brand into new territories and does so with grandly entertaining brio, and even if all facets aren’t quite perfect they’re still strong enough to make this sci-fi adventure worthwhile. 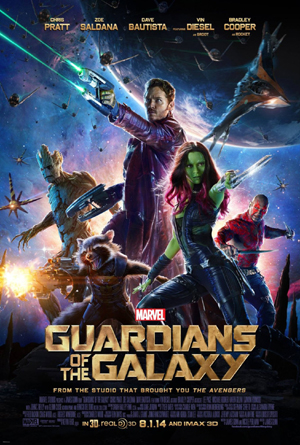