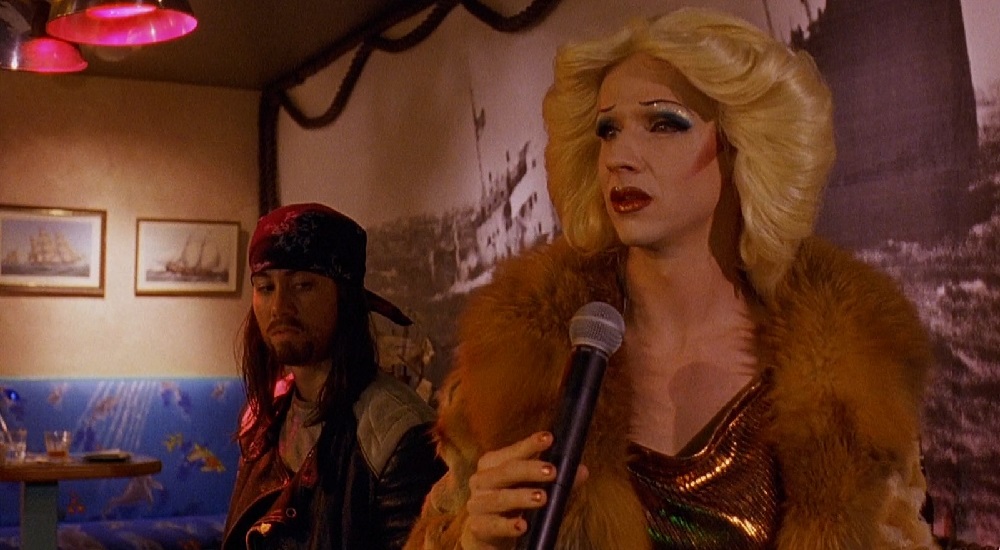 Hedwig and the Angry Inch a Rockin’ Good Time

John Cameron Mitchell and Stephen Trask’s film version of their Off-Broadway smash Hedwig and the Angry Inch is the year’s most enjoyable movie. It’s a bouncy, energetic, dynamic and loopily fun confectionary treat of rock’n’roll and gender dysphoria. It’s Rocky Horror for a new millennium. It’s a post-punk odyssey of love and longing filled with wit and surprisingly poignant observations on the human condition.

Fresh off its successful launch at the 2001 Sundance Film Festival where it walked off with the audience award for best dramatic film and a directing award for first-timer Mitchell, the film now gloriously pounces upon the rest of the U.S. like a beer-swigging Glam Rock tour. Like the return of the Go-Go’s or Madonna, this is a gotta-see-it extravaganza I won’t stop talking about any time soon.

The story follows the travels of young post-op transsexual Hedwig (Mitchell) and her band The Angry Inch as they make their way across the American Midwest performing in strip malls and buffet-style Asian seafood restaurants. They’re following the mega-tour of young Tommy Gnosis (Michael Pitt), a Bowie-like superstar who once was Hedwig’s lover and pupil. But just as Anakin Skywalker morphed into Darth Vader, young Tommy brutally stole away from paramour’s arms using her songs to bring himself fame and fortune.

As the group gallivants across the country in Spinal Tap flourish, Hedwig’s story is told using flashback, music, narration and animation. From her beginnings as a young boy named Hansel making the least of life in East Germany, to the surgery that transforms her into the fiery dynamo Hedwig – while also leaving her with that titular “angry inch” – the singer’s saga overflows in heartbreak, triumph and surreal hilarity. It’s a pitch-perfect musical sensation and the audience is a joyful participant happy to go along for the ride.

A crackerjack team of filmmakers has helped bring this theatrical phenomenon to the screen. From musical director Trask’s expanding of the play’s songs and lyrics, to Frank DeMarco’s (Habit) luminous cinematography, everything here is handled with confident authority and delivered in exquisite detail. Special note must be given to Arianne Phillips’ (The People vs. Larry Flint) incredible costumes and to Thérèse DePrez’s (High Fidelity) sublime production design, both of which are stunning.

At worst, Hedwig announces with a great guttural wail the arrival of a huge talent in John Cameron Mitchell. As writer, director and star, Mitchell shows absolute confidence stepping into each position’s stiletto heels. This movie could have been a ham-handed farce, nothing more than enjoyable matinee fodder at best. In Mitchell’s hands, this proves to be a powerfully profound journey, a mesmerizing gift of romance, music, love, hate and how the fickle fingers of fate help shape even the most mundane details of everyday life.

It’s supremely entertaining. With many of this summer’s fare leaving me pummeled to the point of despair, Hedwig and the Angry Inch is the most fun I’ve had at the cinema in ages. It reminded me that a theater can be the place where dreams come alive, and that life’s most profound lessons can sometimes be ascertained hidden within the lyrics of a song. 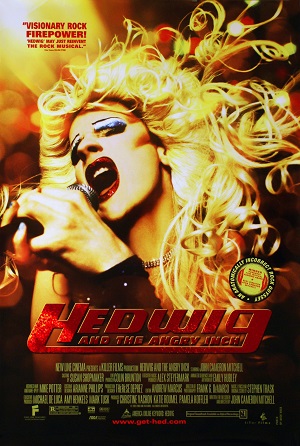