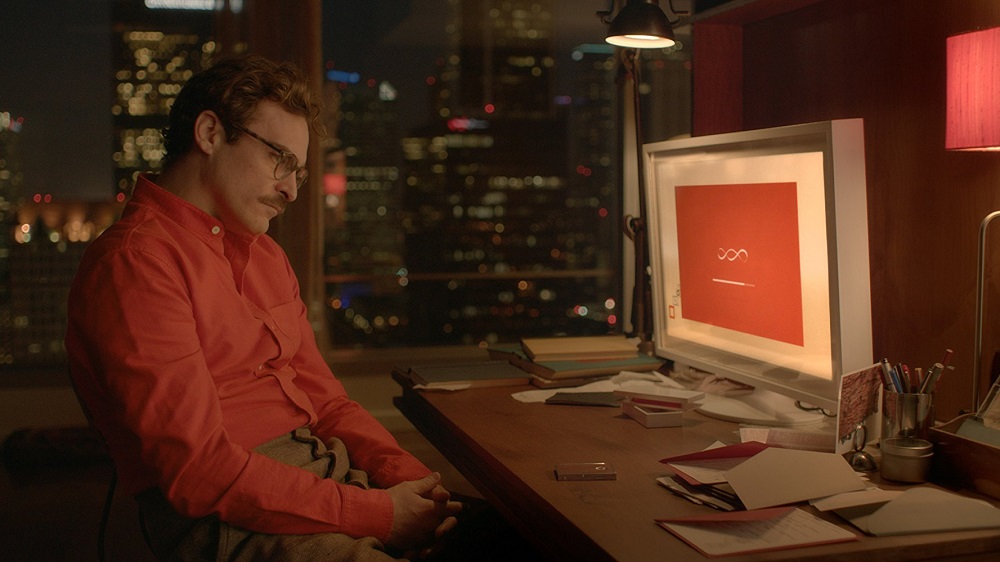 Her a Timely Spectacle of Intimacy, Heartbreak and Understanding

Spike Jonze is as singular and as original a filmmaker as there is working today. The man behind such iridescent achievements as Being John Malkovich and Adaptation, the idiosyncratic filmmaker has outdone himself with the beguiling, multifaceted science fiction-influenced love story Her. Set in a Los Angeles of the very near future, this is as perfect and as precise an examination of our current obsession with technology and with living our lives online as anything that has so made up to this point. 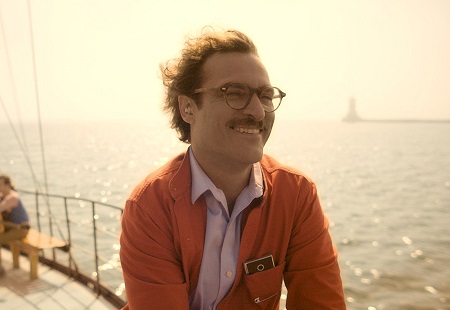 More than that, it is also as honestly constructed a romance as anything I could have hoped for, the film understanding the delicate intricacies of the human heart with startling perceptiveness. It’s relatable in a way that is difficult to put into words, a fact made even more impressive when you consider the central love affair revolves around a human being of flesh, blood and bone and a programmed computer operating system made of software, code and unfathomable bits of digitized engineering.

You read that correctly. Her revolves around the romance between a man and, not a computer, not a machine, but an operating system (O.S. for short). What’s more, it’s a believable one. The movie is captivatingly authentic, traversing the heart’s most mysterious pathways with ease. Jonze’s script is an incredible one-of-a-kind journey of self-discovering and experimentation that is universal in its humanistic underpinnings, making relating to all that’s taking place a far easier thing to do than one might initially imagine it would be.

The central protagonist of this tale is Theodore (Joaquin Phoenix), a sensitive creative sort who makes his living composing handwritten letters of affirmation and love for others. But as good as he is at doing this, his own personal life is a mess, the thirty-something writer dealing with the repercussions of a failed marriage he’s can’t quite put behind him and is still depressively ruminating over.

Enter Samantha (Scarlett Johansson). She’s the voice of a brand new operating system Theodore has recently purchased to run his personal computing provider. She’s smart, funny, insightful and intuitive, showcasing a zest for learning and a passion for life he hasn’t allowed himself to experience since his marriage came to an end. Theodore is smitten in a way he can hardly comprehend, the pair evolving as a couple as the man learns to open his heart back to the world while the O.S. advances into a self-aware consciousness eager to experience all of the emotions the world at large has to offer.

Jonze allows the futuristic aspects of his scenario to augment all that it is he’s talking about as they pertain to the here and now, the filmmaker looking at our online digital world and how we’re slowly allowing ourselves to disconnect from human contact in shockingly intimate minutia. He uses Theodore and Samantha’s story to showcase how love can blossom in the most unique and unexpected of places, each character bringing out the best in the other as they both metamorphosis into something vibrant, alive and most of all new.

Phoenix gives a superb performance, one that at the very least equals his turn in The Master just last year. This is as nakedly open and as emotionally pure a piece of movie acting as any I could ever have hoped to experience, every facet of Theodore’s being coming to light in delicate incremental stages, all of them dependent on where his relationship with Samantha stands at that current moment. Phoenix is raw, totally unvarnished, his smile capable of lighting up an entire room while his misery effortlessly produces a bucket full of tears.

Then there is Johansson. I almost don’t know what to say, as this is one of the best vocal performances I believe I’ve ever had the good fortune to encounter. This goes so far beyond the reading of lines, what the actress accomplishes excruciatingly genuine in its emotional complexity. With nothing more than the timber of her voice or the enunciation of certain syllables, Johansson crafts a living, breathing character out of a machine, developing a believable chemistry with her Phoenix that’s capable of snapping a person’s heart clean in two. 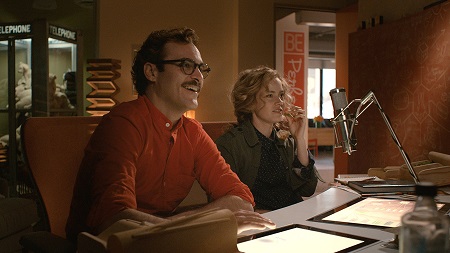 Splendid supporting work is turned in by Amy Adams, Rooney Mara, Chris Pratt, Kristen Wiig, Olivia Wilde, Portia Doubleday and Laura Kai Chen, each making the most of their respective appearances, all of them adding additional insights and gradations to the story that would never have existed without their efforts. Arcade Fire provides the stirring, delicately balanced score, while Hoyte Van Hoytema’s (Let the Right One In) cinematography amazes with its naturalistic visual progressions. As for K.K. Barrett’s (Where the Wild Things Are) production design, it’s incredible, the dichotomy between Jonze’s futuristic ideas and the inherent modernisms of our 2013 society sublime.

In a year that’s been filled with some magnificent cinematic entertainments, Her might just be the best of the bunch. Jonze has managed to do something here that will undoubtedly catch many by surprise, the way this romance revolves and who the central players end up being not at all traditional. It is a beautiful, life-affirming achievement building to a beguiling bit of perceptive understatement that took my breath away, and while the world might be moving in increasingly robotized circles, that doesn’t make the connections we make with those we interact with any less long-lasting, monumental or important. 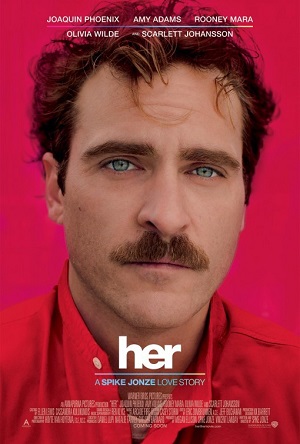