It wouldn’t surprise anyone to find out that Charlie Bronson (Dax Shepard) is in Witness Protection. His name is easily the first obvious giveaway, as is the fact his best friend, apparently his only friend, is Randy (Tom Arnold), the somewhat bumbling Federal Marshal assigned to look after him.

But when his fiancé Annie (Kristen Bell) is offered her dream job in Los Angeles, Charlie insists on driving her there himself, even if by doing so he’s heading straight into danger. Why? That’s the city where his troubles began, doing the getaway driving for a notoriously venal bank robber (Bradley Cooper) and his equally bloodthirsty crew, a group that even includes his vindictive ex-girlfriend (Joy Bryant). Thanks to Annie’s own ex Gil (Michael Rosenbaum), the group knows Charlie is coming to town, and considering he’s the only one who knows the whereabouts of their last major score to say they’d like to speak with him would be a violent understatement.

I get what Shepard, who wrote the script and co-directs with David Palmer, was trying to do with Hit & Run. He wanted to make the same sort of lean, mean late-1960s, early 1970s Steve McQueen meets John Frankenheimer throwback, attempting to deliver a modern Vanishing Point with a romantic comedy twist. It’s a laudable endeavor, the finished film having plenty of positives worthy of gentle applause. Yet the bottom line is that, for a kinetic thriller, for a movie where adrenaline is supposed to be incrementally increased at the same level as a speeding automobile’s RPMs, the finished feature isn’t all that exciting, my pulse never rising at any point.

That’s a big problem. What’s even stranger is that Shepard and Palmer go out of their way to let us know they’ve staged many of these car chases for real, sticking their talented cast directly behind the wheel the same way Frankenheimer did with Grand Prix, Ronin and other car chase classics. The wind whips through Bell’s hair and the look on Cooper’s face as his car does a hairpin turn is genuine. Yet never once did any of this automotive verisimilitude get me endorphins firing, and while I was impressed by what the stunt team was accomplishing, I can’t say that meant I was also entertained.

Why? Hard to say, really. The movie is somewhat lazily photographed and edited, having a static feel that is the exact antithesis of the action being depicted. There is something rudimentary about the staging, something blasé about how the screeching tire fireworks are handled, and as such it all kept me frustratingly at arm’s length.

Shame, because from a comedic standpoint Shepard has done a fine job with the character side of his script, giving Bell, Cooper, Arnold and himself interesting roles they all were born to play. For Bell, she instantly reminded me why I so easily became spellbound by her on “Veronica Mars.” In regards to Shepard, this might be the first time he’s registered with me as anything other than an insufferable buffoon. In Arnold’s case this movie is a minor godsend, and much like True Lies this is a reminder of how funny he can be in the right supporting part. But none of them can hold a candle to what Cooper is doing. He steals the entire film right out from underneath his costars, his dreadlocked villain a seductively evil delight I couldn’t get enough of.

Yet I never really cared about whether Charlie was going to get Annie to Los Angeles in time. Even a third act appearance from Beau Bridges didn’t do much for me, the final car chase a shockingly boring bit of dusty carnage that falls annoyingly flat. Hit & Run is relatively well acted and shows a great deal of promise, just not enough of the latter for the former to matter near as much as it otherwise would. It all runs out of gas long before it’s even come close to sniffing the finish line, making this one race against time I almost wish I hadn’t bothered with. 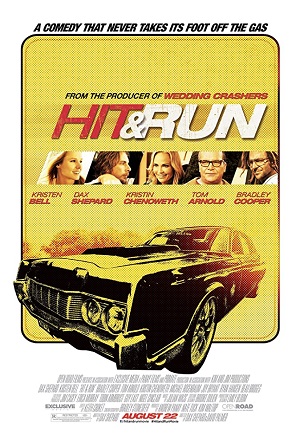