Tara Subkoff is a fashion designer known for her ‘Imitation of Christ’ clothing line and an actress who has appeared in movies as varied as As Good as It Gets, The Cell and The Last Days of Disco. She makes her behind-the-scenes debut with #Horror, a ripped from the headlines satirical thriller revolving around a group of well-to-do 12-year-old girls at a slumber party dealing with various aspects of modern day cyber bullying. Subkoff writes, directs and produces, the resulting motion picture not so much a piece of genre exploitation as it is an uncomforting commentary on today’s juvenile online world creepily disguised in slasher clothing.

There are a lot of skillful elements holding things together, but that doesn’t make the resulting feature any easier to endure. There is a queasy voyeuristic streak running through the whole thing that appears to be designed solely to make the viewer feel like a shell-shocked pedophile. On top of that, digital elements showcasing the cellphone game app that the girls play to catalog their various insults and grotesqueries all aimed at their supposed ‘friends’ is headache-inducing, not really doing as much for the finished film as I think the director intends.

One wintry evening scholarship student Sam (Sadie Seelert) is invited to the secluded, modern art-filled mansion of schoolmate Sofia (Bridget McGarry) for an all-night party involving a number of her classmates. She’s there because popular wild-child Cat (Haley Murphy) has invited her, the remainder of the girls (Blue Lindeberg, Mina Sundwall, Emma Adler) none too pleased to have ‘the poor kid’ around. Even so it’s all fun, games, putdowns and name-calling intermixed with playing dress-up with Sofia’s socialite mom Alex’s (Chloë Sevigny) wardrobe, jewelry and makeup, the pre-teens not above breaking into the liquor cabinet while they’re messing around.

Things take a disastrous turn, the name calling and body shaming beyond the pale. One of the girls is even turned out of into the cold, sent home packing, leaving Sam at a loss as how to react as she finds herself torn between trying to fit in while also not wanting to become the new pincushion for verbal abuse. It’s all made worse when it turns out someone is looking to take this cyber game playing and bullying to a whole new level, trading in metaphorical blood for the real stuff as they attempt to slice and dice the slumber party participants one-by-one.

There’s a lot to take in, and many of Subkoff’s points are valid, especially when one reads up on current events and hears story after story of youngsters so shamed by their peers they end up doing something terrible to ease the pain. Here, not only do we have the girls themselves acting like villainous undertakers euphorically digging cemetery plots for those they purport to call ‘friend,’ we’ve also got the careless, self-indulgent parents (played by the likes of Sevigny, Timothy Hutton, Balthazar Getty and Natasha Lyonne) shirking their adult duties.

As obvious as everything she’s saying might be, the way she goes about putting voice to it all is admittedly novel, Subkoff crafting an mature, somewhat gory teenage slasher but using kids so young it’s likely their parents still shop for clothes for the lot of them in the kids section at the local Nordstrom. All of which makes what transpires even more difficult to watch than it would have been had the central sextet been four or five years older, and while the icky sensation one gets while observing them is likely intentional that doesn’t make it any more pleasant.

Or less heavy-handed. Visually, the newbie auteur knows how to frame a scene, composing invigorating images with cinematographer Learan Kahanov that are continually intriguing. But thematically, all of Subkoff’s ideas are delivered with all the subtly of a lead pipe cracked to the side of the viewer’s head, and as laudable and as timely as they are having them bludgeoned into me with such ungainly ferocity wasn’t what I’d call entertaining. There is a pretentious callousness to things I found increasingly frustrating, everything building to a not-so-startling reveal that’s neither scary nor profound and as such I could have cared less.

The weird thing is, as distasteful as all of it might be Subkoff does have talent, and I’d be remiss if I didn’t admit that a few of the climactic elements didn’t stick in my gut something fierce due in large part to their primal, rage-fueled destructiveness. She also gets strong performances from all six of her primary starlets, Seelert, McGarry and especially Murphy in particular, the eventual showdown involving all three dynamically primitive in large part thanks to them. #Horror isn’t a fun watch, and what it says is hardly profound. But that doesn’t make the film any less easy to turn away from, either, and as debuts go Subkoff has crafted one I’m going to be thinking on for quite some time, indeed. 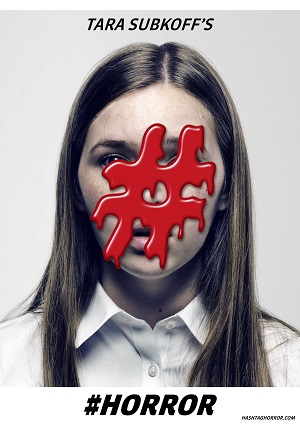