Hiccup (voiced by Jay Baruchel) and his beloved Night Fury Toothless have watched their friendship evolve into something special. Together the pair have shown how humans and dragons can peacefully coexist. They have survived untold dangers, suffered catastrophic loss and grown to become leaders and heroes worthy of respect and admiration. For Hiccup, he has fully followed in his late father Stoic’s (Gerard Butler) massive footsteps and become the Viking chief of the township of Berk. For Toothless, he has proven his worth against the mightiest of adversaries, emerging as the King of Dragons all of his kind, no matter what their species, are compelled to follow.

While things appear to be going well, it is equally clear that Hiccup’s mission to free dragons from captivity and to bring them back to Berk for sanctuary is on the verge of becoming untenable. Overcrowding is a problem, and no matter how much love Viking and dragon show one another community resources are stretching thin. But Hiccup has a dream. He has visions of moving the citizens of Berk and all of the dragons to a fabled land his father used to tell him about as a child known only as, “The Hidden World,” a place where they will be safe from harm and can continue to coexist in peace.

It is safe to say that writer/director Dean DeBlois’ How to Train Your Dragon trilogy, based on the classic books by author Cressida Cowell, is one of the great animated trilogies of all-time, taking its place alongside Pixar’s Toy Story films with ease. In this supposed final installment, the filmmaker has delivered in ways that are affectionately wondrous, events in How to Train Your Dragon: The Hidden World building to an emotional knockout punch that had me holding back tears while at the same time wanting to rise to my feet and cheer. It is a sublime culmination of themes and ideas the filmmaker deftly introduced in the 2010 original and then adroitly followed up on in its action-packed 2014 sequel How to Train Your Dragon 2, and while this last chapter isn’t always as creative and imaginative as its predecessors that does not make it any less buoyantly entertaining.

All of the characters from the past two stories return (even Stoic in a pair of effectively empathetic flashbacks). But while each of them gets the opportunity to make their individuals presences known, most notably the brother-sister tandem of Ruffnut (Kristen Wiig) and Tuffnut (Justin Rupple), Hiccups’ loving warrior of a mother Valka (Cate Blanchett), acerbic one-armed blacksmith Gobber (Craig Ferguson) and baby dragon protector Fishlegs (Christopher Mintz-Plasse), DeBlois never losses focus as to who things should be centered upon and why. Hiccups’ relationship with the fiercely intelligent and self-reliant Astrid (America Ferrera) continues to grow in naturalistic complexity, their friendship progressing into the type of affectionate, life-changing bond that could theoretically make them both better people, and even better leaders, if they trust their feelings and let things continue to progress to their natural conclusion. Their moments together add a layer of romantic camaraderie that never feels trite, isn’t forced and builds in ways that tug at the heartstrings with a subtle grace I adored. I loved how things have developed for the two of them, their conversations adding layers of insightful nuance to the proceedings that’s fairly close to perfect.

But even they aren’t the component that makes this climactic entry in the trilogy essential. As it should be, Hiccup and Toothless, the way their friendship has changed over the years, the unbreakable bond they have manufactured, their relationship is the one that rightfully takes center stage and fills up the spotlight. Even though the dragon gets his own potential love interest, a female member of his species known as a Light Fury, there is no denying where it is DeBlois has focused his screenplay. Hiccup and Toothless have saved each other and they’ve saved their respective worlds. Now they must both learn they can continue to do that even if the other isn’t always standing (or flying) right there with them. It is the last lesson the pair need to learn and it will be the most difficult one for them to accomplish, whether or not they will be able to do so the key component that will signify victory or doom for both human and dragon communities alike.

As great as all of that is, I can’t say I was continually amazed in the same way I was for both of the first two How to Train Your Dragon adventures. This story’s primary villain, a demented dragon killer named Grimmel (F. Murray Abraham) who has made it his life’s ambition to eradicate every Night Fury from the face of the Earth, isn’t nearly as scary or as imposing as he’s clearly supposed to be. Additionally, his initial plan to trick Toothless into falling in love with the Light Fury so he’ll abandon Hiccup and the rest of the Berk Vikings, leaving them and their dragons relatively unprotected, doesn’t always make a lot of sense, and for someone who is supposed to be the best dragon hunter the known world has ever seen, some of his actions still ended up annoying me something fierce from time to time. But Abraham is excellent, his vocal performance absolutely beyond reproach, while the climactic battle where all of the heroes reunite and Hiccup and Toothless unexpectedly make the most of their bond is moderately glorious. It all helps make many of the more familiar elements or the few noticeable missteps not matter anywhere near to the extent they otherwise might have, and all things considered the fact I was grinning like a wide-eyed six-year-old for most of the sequel’s 104-minutes isn’t a thing I take lightly.

Ultimately, however, it is the film’s final ten minutes that make it something truly special. DeBlois ends things in a way this is, in a word, magnificent, Hiccup and Toothless’ friendship coming full circle in a manner that held me euphorically spellbound. Even the story’s unexpected epilogue is splendid, this soaring testament to the enduring power of friendship, trust, love and family just the kind of hope-filled denouement we all need to listen to and learn from no matter our age, race, gender or background. How to Train Your Dragon: The Hidden World is a fiery marvel I didn’t want to see end, the fact this trilogy exists for generation after generation of viewers to discover makes my heart sing in ways it so rarely gets the opportunity to do. I can’t wait to watch this one again. 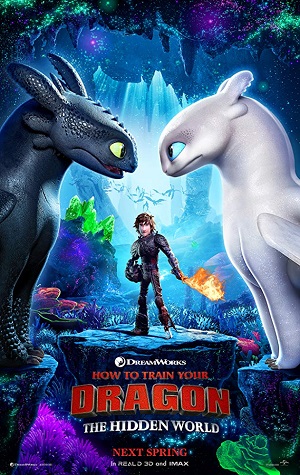