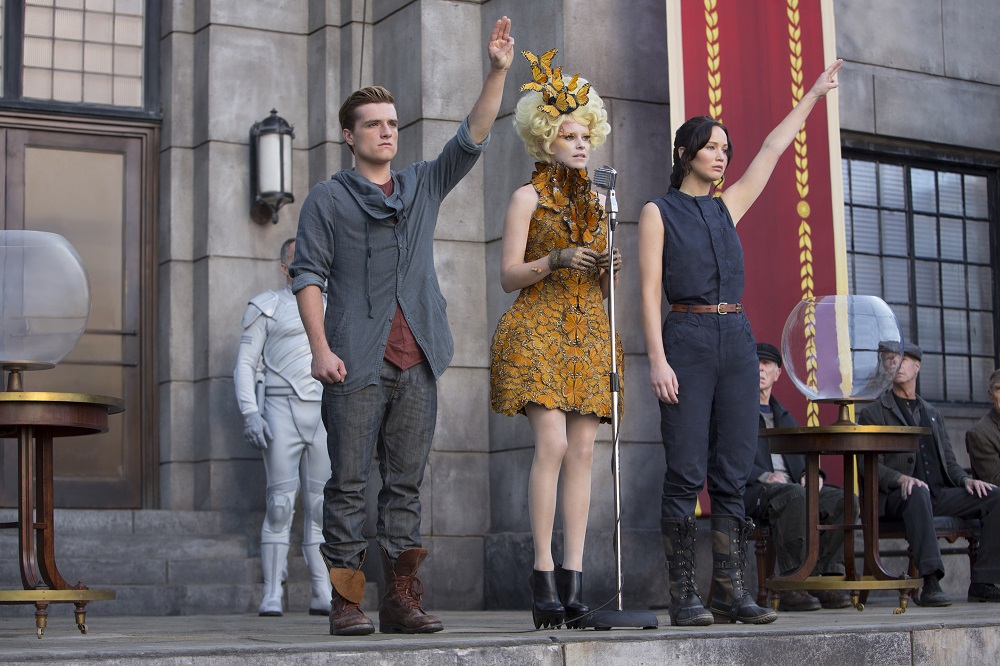 Middle films in a trilogy are always a tricky proposition (and, yes, I realize the final book in author Suzanne Collins’ series Mockingjay is being split into two parts but the axiom here still applies). History tells us second chapters are either a series’ high water mark (The Godfather Part II, The Empire Strikes Back, X2,The Lord of the Rings: The Two Towers) or an overly cluttered nadir searching for a reason to exist other than to give 15 minutes of exposition setting up the last part of the triptych (Pirates of the Caribbean: Dead Man’s Chest being arguably the most egregious example). Part twos have to balance giving fans what they want with setting up climactic events while also trying to work as a standalone enterprise, character development, story, narrative and emotion having to work together in ways first parts of a franchise don’t have to worry about. 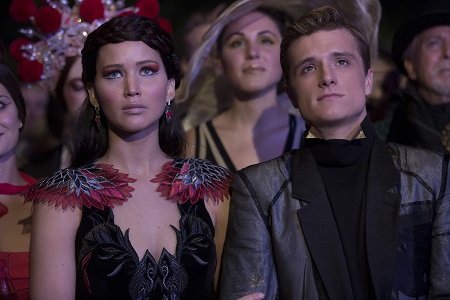 I can’t say I liked Catching Fire, the sequel to last year’s monster smash The Hunger Games, more than I did its predecessor. Much like Collins’ book, there are times it covers a lot of familiar ground, the premise itself – victors Katniss Everdeen (Jennifer Lawrence) and Peeta Mellark (Josh Hutcherson) are forced back inside the arena to fight for their lives, this time up against former victors, all trained killers who know a thing or two about bloodletting – more or less an amplified version of what happened the last time around. At the same time, director Francis Lawrence (I am Legend), taking over for the departed Gary Ross, has managed to craft a brutally exciting adventure, he and screenwriters Simon Beaufoy (127 Hours) and Michael Arndt (Toy Story 3) delicately planting the seeds of a rebellion never losing sight of the bigger picture while at the same time making sure this story in and of itself remains worthy of an emotional investment.

When we last left Katniss and Peeta, the pair had found a way to circumvent the rules allowing them both to survive Panem’s 74th annual Hunger Games and become romantically entangled darlings of the Capital in the process. But President Snow (Donald Sutherland) sees through their ruse and understands the unintended consequences of Katniss’ machinations as far the country’s 12 outlying districts are concerned. Murmurs of uprising are in the wind, and before they have a chance to blossom he knows he needs to make an example of her, as well as the other victors of the Games, in order to see them abated before they have the opportunity to bloom.

The ‘Quarter Quell’ gives him the opportunity for just this, the 75th anniversary of the Hunger Games allowing for a few new wrinkles, wrinkles he exploits, in order to put Katniss and 23 of her fellow competitors back into the gladiatorial arena for a second time. For the teenager, a year older, a year wiser but just as emotionally fragile, all she wants to do is find a way for Peeta, not her, to survive, the young woman not wanting to be a role model let alone be put forth as some sort of leader or hero. As long as her family is protected and her district is safe then what’s going on in the outside world is of no concern, pity said outside world doesn’t feel the same.

Francis Lawrence has always been a visual artist of the first degree; it’s his narrative and dramatic chops I’ve always taken issue with. He likes to hammer points home, subtlety, up to now, never a part of his vocabulary. While action sequences in Constantine and I am Legend looked terrific, while Water for Elephants contained sequences of undeniable hypnotic eloquence, those films all had significant problems as far as their emotional components were concerned. They hit you over the head more often than not, the sheer stupidity of the melodramatics at the heart of all three more than I could bear.

Here, he follows Ross’ lead gloriously, allowing silence to speak volumes completely unafraid to not punch sequences up just for the sake of giving them more visually didactic razzle-dazzle. Additionally, Beaufoy and Arndt, freed from having to engage in any expository excess because audiences are now, or at least should be, relatively accustomed to Collins’ world thanks to the first film get to move freely from scene to scene and sequence to sequence with few handicaps. Together, these three manage to keep things focused, centered, never overplaying their collective hands, while at the same time cannily foreshadowing many of the perilous events to come.

As for the cast, along with Lawrence and Hutcherson the survivors are all back including Sutherland, Woody Harrelson, Elizabeth Banks, Stanley Tucci, Lenny Kravitz, Paula Malcomson, Willow Shields and Liam Hemsworth. Newcomers include the great Philip Seymour Hoffman as mysterious, close to the vest gamemaker Plutarch Heavensbee as well as Jeffrey Wright, Amanda Plummer, Jena Malone, Sam Claflin and 80-year-old legend Lynn Cohen as a handful of the returning Hunger Games veterans forced back into the ring to square off against Katniss. All are pretty terrific, Sutherland, Banks, Kravitz and Wright making the most indelible impacts, while at the same time all of them are given a moment or two to standout as far as Beaufoy and Arndt’s relatively complex and intricately designed script is concerned.

But, much like the last time out, this is Jennifer Lawrence’s show, and she’s front and center right from the start exactly as it should be. The young Oscar winner does some dynamic work, mining emotional territories the first film hinted at which the sequel now makes horrifically explicit. There is heart, passion, fear, longing, anger and compassion filtering throughout this performance, all of it coming to the forefront at any one moment depending on the situation. Thing is, Lawrence doesn’t allow herself to go over the top into cartoonish histrionics, holding her own in every scene no matter what’s going on or who it is she’s sharing the frame with. The last image is all about her, the film closing on a fantastic transformative sight that showcases all who Katniss has been with all she is about to be become. 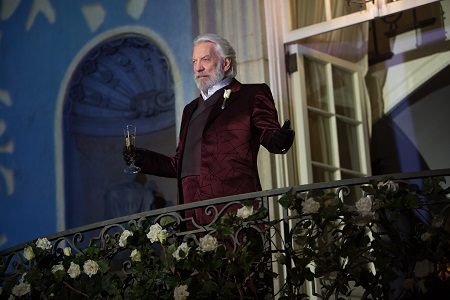 Still, even though facets are different, even though the contenders are no longer children, it almost can’t be helped that essential components carry a staggering level of unavoidable déjà vu. On top of that, director Lawrence seems so intent on keeping himself in check, keeping his tendencies towards melodrama in control, some of the deaths happening inside the Games themselves do not have the impact I felt they should, central players meeting their doom – whether heroically or by happenstance – without the terror or the tragedy connecting as viscerally as they did in the first film.

Thankfully, however, The Hunger Games: Catching Fire doesn’t remotely fail as far as sequels go. Better, as the bridge chapter taking viewers from the initial setup to the cataclysmic, world-in-revolt finale it does a grand job both as a precursor showing how things evolve but also as a standalone entertainment worth watching more than once in its own right. While at this moment I think I still enjoyed the first film more, that doesn’t make this second effort any less wonderful, and for my part November 2014 can’t get here fast enough as I’m excited to see the Girl on Fire’s journey into revolutionary fury continue unabated.