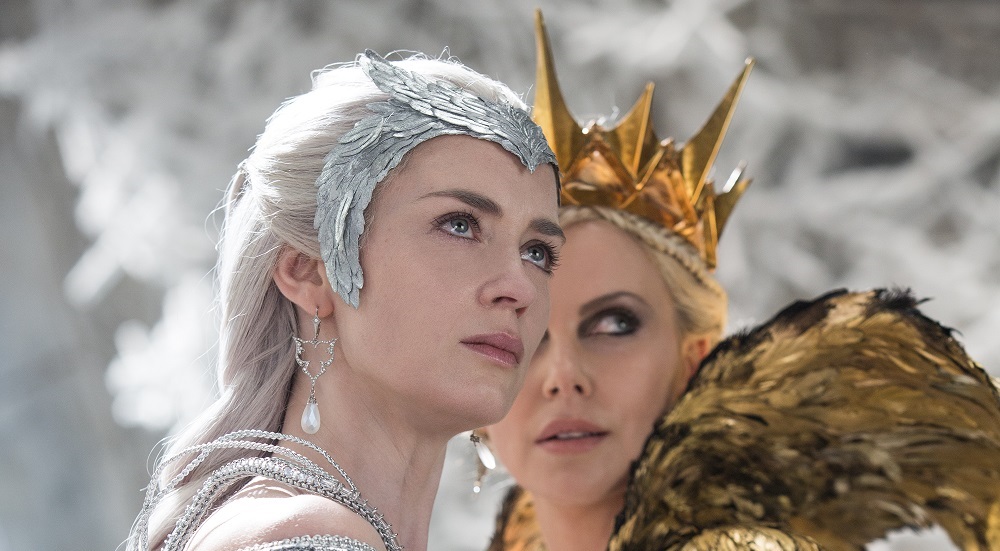 The awkwardly titled The Huntsman: Winter’s War is quite possibly 2016’s most unnecessary sequel. I mean, I liked 2012’s Snow White and the Huntsman, got a kick out of its fantastical reinvention of the classic fairy tale, but even I had no real wish to see the story continued on from where that film left off. Still, with the return of Charlize Theron as the Evil Queen Ravenna and Chris Hemsworth as the titular huntsman Eric, and with the additions of luminous heavyweights Emily Blunt as the Ice Queen Freya and Jessica Chastain as the fearless warrior woman Sara, I can’t say my curiosity wasn’t piqued. 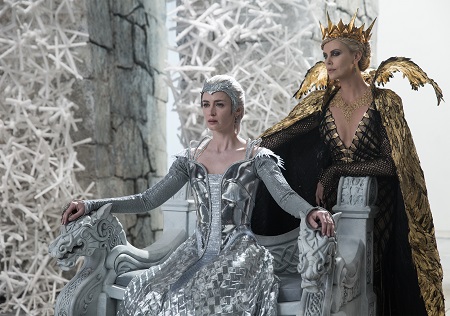 Whether the film needed to exist or not is an argument I’m happy to save for another day. What can be discussed is whether or not the film in question works and, for my part, I vote a modest yes, this second chapter in Eric’s ongoing story (Snow White is nowhere to be found other than in flashback) keeping me relatively entertained for the majority of its 114 minutes.

Working as both prequel and sequel, this new film begins with sisters Ravenna and Freya discussing the merits, or lack thereof, of falling in love. Not wanting to see her younger sibling enjoy the longings of the heart she is incapable of experiencing, Ravenna, with the aid of her golden magic mirror, engineers a tragedy that will shatter Freya to her core. When this occurs, little sister literally discovers she has power over ice and snow, transforming her kingdom into a frozen wasteland where she kidnaps legions of children with plans to transform them into an unstoppable army she dubs her Huntsmen.

Two of these children grow up to be Eric and Sara, and even though it is forbidden they fall madly in love, pledging to follow one another to the end of time even if doing so means their likely destruction. Freya cannot let this stand, and through trickery of her own she separates the duo in a way she’s certain will last forever. But fast-forward seven years and Eric has returned to her kingdom, his quest to destroy Ravenna’s magic mirror leading him back to his former Queen’s doorstep. Reunited with Sara, it will take every ounce of the pair’s courage, skill and love to see the task done, especially after Freya inadvertently resurrects her wicked older sister from the afterlife utilizing the mirror’s considerable power.

New screenwriters Evan Spiliotopoulos (Hercules) and Craig Mazin (Identity Thief) run themselves in endless circles trying to make any of this work, the pair working in characters from the first film (Sam Claflin returns for a cameo appearance as the dashing King William, while Nick Frost saddles up again as kind-hearted dwarf Nion) while also attempting to add a number of newcomers to the mix (Blunt, Chastain, Rob Brydon as Nion’s dim-witted half-brother Gryff and Sheridan Smith and Alexandra Roach as fellow dwarves Mrs. Bromwyn and her loyal companion Doreena). They shoehorn the Frozen fairy tale into the story for fairly obvious reasons, while at the same time coming up with a variety of explanations as to why both Eric and Ravenna’s respective stories are still ongoing.

It’s all a bit of a mess, drawing on inspirations ranging from 1980s fantasy stalwarts like Labyrinth, Legend and Ladyhawke, animated masterpieces like Princess Mononoke, Peter Jackson’s The Lord of the Rings trilogy, Disney’s take on The Lion, the Witch and the Wardrobe and even popular video games like Uncharted 2: Among Thieves. It’s a total hodgepodge, moving from one idea to the next in the desperate hope some of them will work, and while narrative coherence isn’t always possible, the fact I was able to keep track of what was happening when, why it was and to whom it was involving is honestly something of a minor victory for both Spiliotopoulos and Mazin.

Be all that as it may, I had a fairly wonderful time watching all of this play itself out. The film is consistently funny, Frost, Brydon and Smith delivering a number of solid laughs throughout, while heat coming off Hemsworth as he pounds his chest and lays his emotions bare is palpable to say the least. Theron, her appearances relegated to the story’s bookends, seems to relish the opportunity to chew up the scenery with her rambunctious malevolence, devouring every second of screen time almost as if they were to be the very last ones of her justifiably lauded career. As for Blunt, she invests herself completely into the proceedings, delivering a far more complex, tragically eloquent performance than the film likely deserves, creating a deeply human portrait of suffering, loss and despair that builds in power and passion as things move forward to their somewhat inevitable conclusion.

It would have been nice to have seen Theron, Blunt and Chastain get more time together as a trio, their only scenes together happening during the purposely frenetic climax where allegiances shift and the quest to destroy the mirror finally comes to its expected end. More than that, while he is the star, it would have been nice if Hemsworth’s Eric could have let Chastain’s Sara do a bit more, the fact her character is virtually his equal in all ways that matter only makes her sudden transformation into a cliché damsel in distress all the more disappointing. Other characters, most notably Brydon’s Nion and Smith’s Mrs. Bromwyn, disappear entirely for no discernible reason that I can figure, their absence during the climactic confrontation one I couldn’t help but notice. 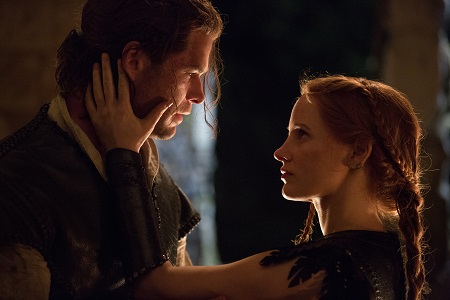 Still, visual effects technician (he actually got an Oscar nomination for working on Snow White and the Huntsman) turned director Cedric Nicolas-Troyan does a nice job keeping the focus where it needs to be, his action scenes having a swift urgency to them that’s relatively pleasing. While not quite the visualist his predecessor Rupert Sanders proved to be, he still gives his esteemed cinematographer Phedon Papamichael (Nebraska) plenty of room to operate, the pair managing to manufacture a suitably cinematic grandeur I found continually pleasing.

I honestly don’t know why The Huntsman: Winter’s War exists. I can’t say I have a clue if audiences are interested in seeing it. What I do know is that, even filled with flaws and missteps aplenty, I got a serious kick out of this sequel, enjoyed it far more than I imagined I was going to. It’s a fairy tale fantasy that reminded me of my love of the genre I developed as a child, and while not rising to the same heights as any of those ’80s adventures, many of which I have already mentioned, there’s still a bit of magic here, and for that I am understandably delighted. 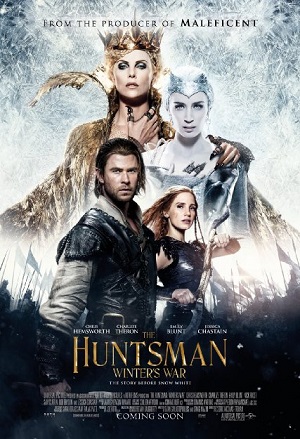