I Care a Lot might be the most amoral, pitch-black comedy-thriller I’ve seen this side of Joel and Ethan Coen’s Burn After Reading. Filmmaker J Blakeson rebounds from the Young Adult disaster of The 5th Wave and gets back into a form similar to his ferocious 2009 yarn The Disappearance of Alice Creed, and in the process gifts stars Rosamund Pike, Peter Dinklage, Eiza González and Dianne Wiest roles each actor devours with gluttonous relish.

As terrific as all that sounds — and it is pretty great — this topically upsetting descent into health care industry madness and judicial malfeasance is still difficult to fully embrace. For one thing, there is almost no one to root for. For another, Blakeson isn’t always successful balancing his social commentary with an entertaining story. Finally, everything builds to a conclusion that, while appropriate, still left a bad taste in my mouth, and I’m not altogether certain this angrily rambunctious, bleakly comedic diatribe hits its intended target.

Marla Grayson (Pike) is a professional court-appointed guardian. When a judge decides an elderly individual can no longer take care of themself and requires constant supervision, she steps in and takes control of every aspect of their life. Along with partner and girlfriend Fran (González), she moves the individual to a senior residence facility, selling off that person’s home or any valuables they might have to pay for their treatment, pocketing a substantial sum in the process.

Their latest mark, Jennifer Peterson (Wiest), is what they in their peculiar industry like to refer to as “a cherry.” Rich. No family. No close friends. Did we mention rich? With the aid of crooked physician, Dr. Amos (Alicia Witt), it doesn’t take long for Marla to get Jennifer ruled incompetent. With shocking speed and cunning efficiency, she and Fran whisk the understandably shaken older woman from her beloved home and plant her into a coldly lifeless senior center before she has any clue as to what is going on. Only a few short days after that, the pair are already holding an estate sale while also preparing to put Jennifer’s home on the open market.

The kicker is that this woman is not who she appears to be. Her disappearance provokes the immediate interest of an initially nameless man portrayed by Dinklage, who wields lethal power over others even though no one seems to know who he is or how he came to rule such a vast empire. The film becomes a battle of wills between this man and Marla, and when legal wrangling proves fruitless and initial attempts at bribery fall on deaf ears, things become increasingly violent from that point forward.

All four of the primary cast members are outstanding, especially Pike and Dinklage. Both are on fire throughout, bringing levels of dangerous, unscrupulous depth to their performances that held me spellbound. The actors revel in their respective characters’ depravity with carnivorous aplomb as each does whatever it takes to gain some semblance of supremacy over the other.

But what makes Pike and Dinklage so marvelous is that each finds a way to bring a sense of tender selflessness to what they are doing that caught me entirely by surprise. Marla and Fran’s love for one another is wholly genuine. The same goes for Dinklage’s unnamed villain and Jennifer, although their connection is far more familial than it is romantic. Both actors tap into something gracefully human in their interactions with González and Wiest, and even though neither character earned my empathy, they still grabbed ahold of my affection, even though every fiber of my being boisterously yelped that neither of them merited it.

Blakeson raises some agonizingly uncomfortable talking points about the American health care system and how it so unsympathetically treats the elderly, and his scathing takedown of a legal system that allows callous disregard for a person’s well-being is hardly subtle. As solid as all of that might be, these aspects of the director’s script are also frequently unfocused. Blakeson has trouble connecting all the dots, which makes this story’s climax ring somewhat false. I never felt the ending to this suitably appalling craziness was earned. Deserved, yes. But earned? No. Not at all.

Still, the acting is universally stellar (including a handful of important supporting turns from Witt, Isiah Whitlock Jr., Nicholas Logan, Macon Blair and especially a delightfully smarmy Chris Messina), and the whole thing is shot with an intimate, high-gloss, otherworldly glow by cinematographer Doug Emmett (Sorry to Bother You) that’s flawless. Blakeson’s confidence orchestrating all this vicious, unrepentantly debauched chaos is never in doubt, and while I wish I liked I Care a Lot a bit more, my unabashed enthusiasm for Pike’s and Dinklage’s performances goes a long way to erasing the majority any of the more obnoxious misgivings I might have had. 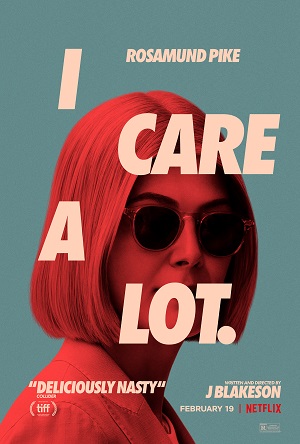