It’s almost starting to get redundant to say this, but Pixar has gone and done it again. From Toy Story to A Bug’s Life to Monsters, Inc. to Finding Nemo, those innovative California digital storytellers have forever changed the face of children’s animated entertainment, each film they make seemingly setting an even higher standard of excellence. Now comes their most adult fable, the brilliant superhero adventure The Incredibles, and to call it the year’s best family entertainment would be an insult. It’s better than that. Much, much better.

The film explodes across the screen in a panoply of colors, sights and sounds. Not so surprising, visually this motion picture is an absolute marvel. Beyond that, it is also a movie with wit and heart, an infatuating fable of family and responsibility that speaks to so many different people in so many different ways I can’t imagine any viewer of any age not finding something of which to relate.

Typical American family the Parrs appear to be just like any other. Patriarch Bob (voiced by Craig T. Nelson) works as a clock-punching insurance man spending his days fighting both bureaucracy and a bulging waistline, mom Helen (Holly Hunter) deals with the suburban nightmare of keeping house and watching over baby Jack Jack, while kids Dash (Spencer Fox) and Violet (Sarah Vowell) do their best playing pranks on unsuspecting teachers and/or invisibly trying to go unnoticed by their fellow students.

But beneath this sitcom-like façade lurks a family like no other. Mr. Incredible, Elastigirl, Dash, Violet. They’re superheroes, ‘Supers’ for short, and the for the past fifteen years they’ve all had to live a life of seclusion, hiding their powers from the world in order to avoid frivolous lawsuits and societal poo-pooing. And they don’t like it. Not at all. Especially Bob. He’s so used to saving the world that a life of pencil-pushing drudgery is driving him slowly mad. Worse, it’s making him worry that Helen isn’t as enamored of him as she once was, and losing the love of his life would be one additional failure he just couldn’t bear.

When a mysterious messenger named Mirage (Elizabeth Peña) offers him the chance to flex his hero muscles (and earn a little money for the family) Bob is understandably intrigued. Even if he can’t tell Helen about these super-powered exploits, it sure as heck beats sitting in the car listening to the police scanner with fellow ex-superhero Lucius (Samuel L. Jackson), a.k.a. Frozone. But what’s a Super to do? If the only way to still help save the world is to be whisked away to a volcanic island in the middle of nowhere owned by a maybe insane red-haired recluse named Syndrome (Jason Lee), that that’s exactly what Mr. Incredible is going to do.

I’m keeping this review short and sweet because I’m running out of accolades. After Pixar’s last three films I’ve utilized just about all of them, so the best I can come up with is to say this as definitively as I can: The Incredibles is 2004’s best film. That’s right, with almost two full months to go I’m making that proclamation, and I’m almost 100% positive I’m going to be able to stick with it. This is a rousing adventure yarn full of complexly drawn characters and tightly wound emotions that can’t help but resonate.

Credit goes to The Iron Giant creator and Pixar freshman Brad Bird. His profoundly multifaceted screenplay is a revelation. On top of that, he and the animators have brought it all to life magnificently. It’s hard not to relate to the Parrs, their ‘Super’ status not even important where it comes to the even greater stakes involved in raising a family. Heck, Disney and Pixar should forget about winning an Oscar for Best Animated Film, this is light years ahead of DreamWorks’ Shrek 2 and Warner Bros.’ The Polar Express, and focus getting a Best Picture nomination instead. The Incredibles is just that, well, incredible, and here’s hoping people go and see just that for themselves at their first opportunity to do so. 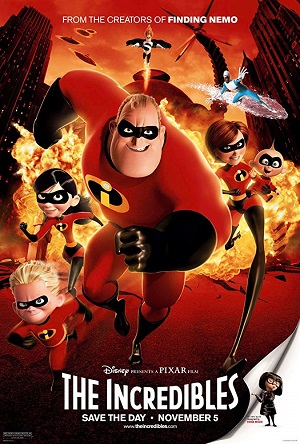