Genius billionaire industrialist Tony Stark (Robert Downey, Jr.) is the largest manufacturer of military weaponry in the world. He is a merchant of death and destruction, none of which bothers him much, his carefree lifestyle of booze, women and leisure (intermingled with time spent inventing new ways to kill) all that really matters to him.

That changes after a trip to Afghanistan to showcase a new missile system becomes a frantic fight for survival. Captured by a ruthless band of insurgents and with his heart injured to the point it requires electrical assistance in order to continue functioning, Tony decides to take matters into his own hands, constructing an advanced suit of impenetrable armor that helps facilitate his escape.

Back in U.S., the wily inventor discovers a new life’s purpose, pledging to protect the innocent and see to it that none of his weapons fall into the wrong hands. With trusted personal assistant Pepper Potts (Gwyneth Paltrow) seeing to his every need and with best friend and military liaison Jim Rhodes (Terrence Howard) smoothing things over with the Pentagon, Tony takes to the sky ready to fight for justice in an even more advanced suit. But evil lurks closer than this so-called “Iron Man” knows, and if he’s not careful it won’t be long until this superhero has a super fall, a cataclysmic descent that will likely result in his death.

The new comic book adventure Iron Man welcomes in the Summer movie season with a type of giddy exuberance and whiz-bang glee it feels like the multiplex hasn’t seen in eons. For a good hour this new take on one of Marvel’s signature characters is a blissful delight, and for a while there I was certain I was in for a heroic treat along the lines of Batman Begins or X-Men 2.

Alas this early glee does not last, director Jon Favreau (Elf) and his cadre of writers unable to avoid many of the origin story clichés plaguing just about every comic adaptation ever made. At a certain point the film doesn’t quite seem to know what to do with itself, meandering from action set piece to quirky character moment and back again with all the subtlety of a swift kick to the head. There is a rote, been there-done that quality that’s grows increasingly annoying, and sad to say walking out of the theater I wasn’t exactly jumping up and down for joy.

And yet, I find myself eagerly anticipating a sequel. The stuff that works really works, and there are times during the film I was so enraptured and intoxicated by what was going on I could have cared less just how derivative much of what was happening turned out to be. That early escape from the caves of Afghanistan is thrilling, while an entire sequence devoted to Tony trying master the mechanics of flight recalls the delirious child-like wonder director Richard Donner rapturously evoked in Superman.

The real ace in the hole, however, is Robert Downey, Jr. The actor was made to play Tony Stark. The character feels authentic from the first second he steps into the frame, Downey, Jr. fearlessly making the self-centered womanizer a fully-formed figure worthy of pity and disdain. That means when the man’s crisis of conscience hits I immediately bought it, the industrialist’s razor-sharp sarcastic wit masking a deep-rooted pain rooted in decades of self-indulgently narcissistic behavior. 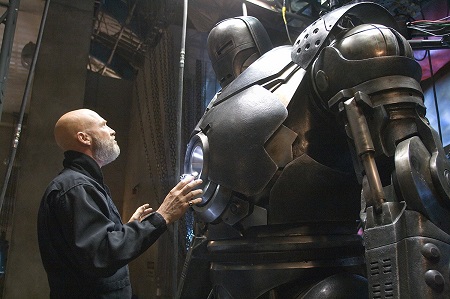 The rest of the cast does just fine, if not so much so you really remember them any longer than it takes to walk outside of the theater. That said Jeff Bridges makes a great villain, his ED-209 to Downey, Jr.’s Robocop a crafty back-and-forth that kept me consistently amused. The underrated dramatic veteran appears to be having a blast here and his affection for both the character and the evil he’s inflicting is frequently infectious. That said, the final confrontation between the two is a bit of a letdown, Favreau staging things like it’s nothing but a mechanical boss battle that brings to end a second-tier Xbox or PlayStation video game.

There’s not much else to say. I liked the movie. Sometimes I liked it a lot. I just never fell in love with this superhero origin story in a way that had any lasting impact. Still, there is real potential here making anticipating a future sequel surprisingly easy to do, the film’s final scene a mischievous grin to the audience that more adventures with Tony Stark are going to be on the horizon. Not to say that this inaugural adventure of Iron Man soars very high, but it does get off the ground, and as far as first chapters in what is sure to be an ongoing story is concerned, at least for right now that’s going to have to be enough. 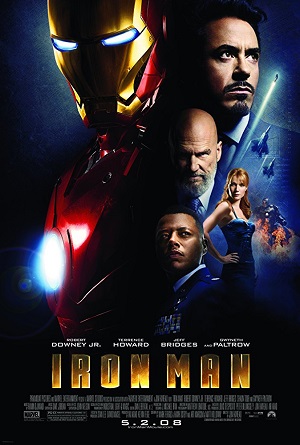