Isn’t It Romantic an Adorable Dissection of Rom-Com Clichés

Aussie immigrant Natalie (Rebel Wilson) is a New York City architect who specializes in designing parking garages. She loves her job, has a doting assistant, Whitney (Betty Gilpin), and is best friends with office mate Josh (Adam Devine) who is constantly trying to convince her to go sing karaoke with him. She also has trouble speaking up in meetings, especially when her boss puts her on the spot in front of their latest client, a cockily self-absorbed entrepreneur named Blake (Liam Hemsworth) who callously mistakes Natalie for an administrative assistant. Most of all, the young woman is a certified cynic who absolutely despises romance, especially the candy-colored sensationalistic version of it put forth in every Hollywood romantic comedy since the invention of cinema. 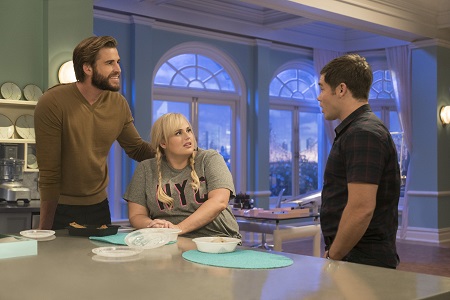 On her way home after work, Natalie is mugged while getting off of the subway and knocked unconscious. After she comes to it is immediately apparent something is wrong. Her apartment has magically quadrupled in size, is completely spotless and is filled with all the latest fashions that all fit her perfectly. Her sketchy next-door neighbor Donny (Brandon Scott Jones) has somehow become her stereotypical, borderline offensive ultra-gay best friend. Back in the office, Whitney has morphed from being her mousey assistant to becoming her bitchy, impeccably dressed adversary eager to engineer Natalie’s fall from grace. Meanwhile, while Josh is as kind, sensitive and friendly as ever, he’s also stopped pining for her, the lovable doofus catching the eye of swimsuit model and yoga ambassador Isabella (Priyanka Chopra). Strangest of all, the formerly American Blake has not only become an Australian just like her, but he’s also putting on the full-court press to make Natalie his girlfriend, pulling out all the rich guy rom-com moves in order to get her to fall head over heels for him.

That’s right, in the world of The Final Girls director Todd Strauss-Schulson’s latest genre evisceration Isn’t It Romantic Natalie has woken up from her brief coma to find herself stranded inside a stereotypical Hollywood romantic comedy, a PG-13 one free of any sexual intercourse or f-driven four-letter-words to boot. Working from a story dreamt up by “Life Sentence” creator Erin Cardillo and a script written by Cardillo, Dana Fox (How to Be Single) and Katie Silberman (Set It Up), the movie is a surprisingly winning bit of comedic silliness that had me grinning throughout. While it’s one-joke premise does wear a little thin, so much so that even at less than 90-minutes in length the movie still feels a wee bit long, there’s just enough energetic pizazz and imaginative zaniness here to keep things interesting.

The best stretch of the film starts when Natalie wakes up in the hospital after her mugging and continues all the way up to the moment she realizes she’s in some strange alternate Hollywoodized romantic reality she’d like to have nothing to do with. These continuous 15 or so minutes poke knowing yet affectionate fun at the genre, doing so in ways that are so inspired I couldn’t help but chuckle out loud multiple times. I loved all of Wilson’s observations as her character desperately tried to figure out what was going on while also acerbically commenting on the insanity that is happening all around her. I also quite enjoyed the re-introduction of all the characters, Hemsworth and Jones particularly making the most of all that is asked of them. As for Chopra, from the moment Isabella meets Josh it is immediately apparent the talented actress was going to go for broke as far as her lively, goofily eccentric performance was concerned. She steals every scene she’s in, and honestly the movie could have used more of her.

Things lose some of their focus after that for a little while. The dynamic back at Natale’s office is treated as something of an afterthought, and for all of Gilpin’s efforts the script leaves Whitney so out to dry it’s almost as if the writers liked the idea of her character’s transformation and wanted to explore the genre’s unfortunate penchant for not allowing workplace female friendships in rom-coms but didn’t have the first clue as to the best way to handle any of that. There’s also not a lot in the way of narrative cohesion which makes it somewhat difficult to get emotionally wrapped up in these events, all of which makes Natalie’s eventual realizations who it is she is supposed to love and the reasons why that’s so not mean near as much as they by all accounts should.

The film does right the ship during its climactic stretch, things going full My Best Friend’s Wedding meets Four Weddings and a Funeral sprinkled with itty-bitty bits of Pretty Woman in ways that are frequently inspired. I was also more than a little shocked just how much I ended up liking Devine in this. Working with Strauss-Schulson again after his goofily histrionic turn in The Final Girls and once more a potential romantic interest for Wilson for the first time since the Pitch Perfect series, the typically obnoxious and over-the-top comedian actual gives a restrained, moderately nuanced performance that I found kind of endearing. He shows a level of emotive restraint I can’t say I’ve seen from him before, and as events danced their way towards their inevitable conclusion I ended up liking Josh way more than I initially thought I was going to.

Wilson remains something of an acquired taste, and I do still find her more palatable as a supporting player than I do an outright lead. Still, this is unquestionably the most consistently delightful she’s ever been, some of her pithy comebacks and unvarnished observations hitting my funny bone with a spirited glee I kind of adored. As for the overall film, Isn’t It Romantic is pretty darn amusing, and if Strauss-Schulson and the writers don’t make quite as much out of their inventive scenario as they potentially could have, that doesn’t make what they have delivered any less enjoyable. It’s a fun little romantic frolic that dissects the clichés of the genre with lovably perceptive respect, and in the end becomes a diverting piece of adorable fluff I’m glad I took the time to see. 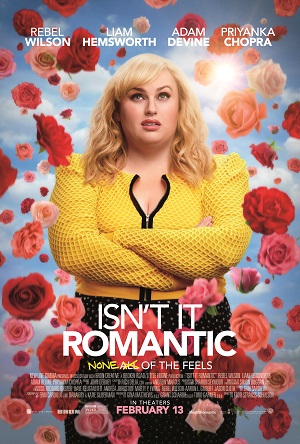