After a pastor’s (Larry Fessenden) prim and proper wife (Barbara Crampton) is bitten by a vampire, she begins to break free from the sexually repressed and emotionally stunted shackles she’s allowed herself to wear for far too long.

There’s a lot going on just underneath the surface in director Travis Stevens’ terrific comedic horror-drama hybrid Jakob’s Wife. Watching Anne Fedder (Crampton) deal with the ups, downs and murderous in-betweens of suddenly being a vampire is an outright joy. Seeing her husband Pastor Jakob Fedder (Fessenden) rediscover his lost virility in the face of his wife’s emotional reawakening almost equally so.

The two of them make for a sublime team, Crampton and Fessenden feeding off one another in a variety of creative ways, each pushing the other to even greater heights as they mine this exquisitely multifaceted and intelligent tale written by Stevens, Kathy Charles and Mark Steensland for all its worth. The former is particularly impressive, the horror icon delivering arguably the greatest performance of her impressive career, finding a way to represent Anne’s exhilaratingly horrific transformation in ways that continually kept me on my toes.

There’s plenty I could add, not the least of which is the creatively inspired way Stevens pays homage to vampire classics like Nosferatu (both F.W. Murnau monumental 1922 classic as well as Werner Herzog’s stunning 1979 update) will also adding a dash of Christopher Lee/Peter Cushing Hammer class along with a note of Douglas Sirk-level melodrama all at the same time. The filmmaker examines themes regarding faith, patriarchal oppression, female empowerment and sexual liberation in amusingly inventive detail, doing all that and more without skimping on any of the voraciously violent gore genre fans are almost certain to love.

The ending does feel a little rushed, and I wish the vampire (lovingly portrayed by The Nun star Bonnie Aarons) would have had just a wee bit more to do. But Crampton and Fessenden are stunning together, the naturalistic evolution of their relationship as they both break out of the shells they’ve allowed one another to boringly reside within for far too long is nothing less than sensational.

I dug Jakob’s Wife. It’s one of the better films I’ve had the pleasure to watch this year, and now that’s it’s available on Blu-ray (and soon to be streaming via Shudder) here’s hoping even more of you out there go on and give it a look.

As of right now, Jakob’s Wife is one of the better films I’ve seen this year. Travis Stevens has outdone himself, and even though this disc is lacking in the special features department, fans are still urged to pick this release up immediately. 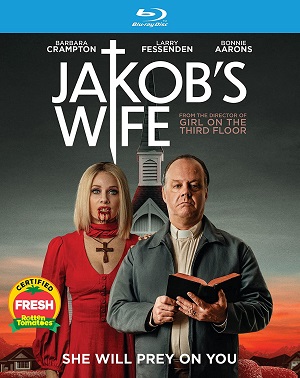