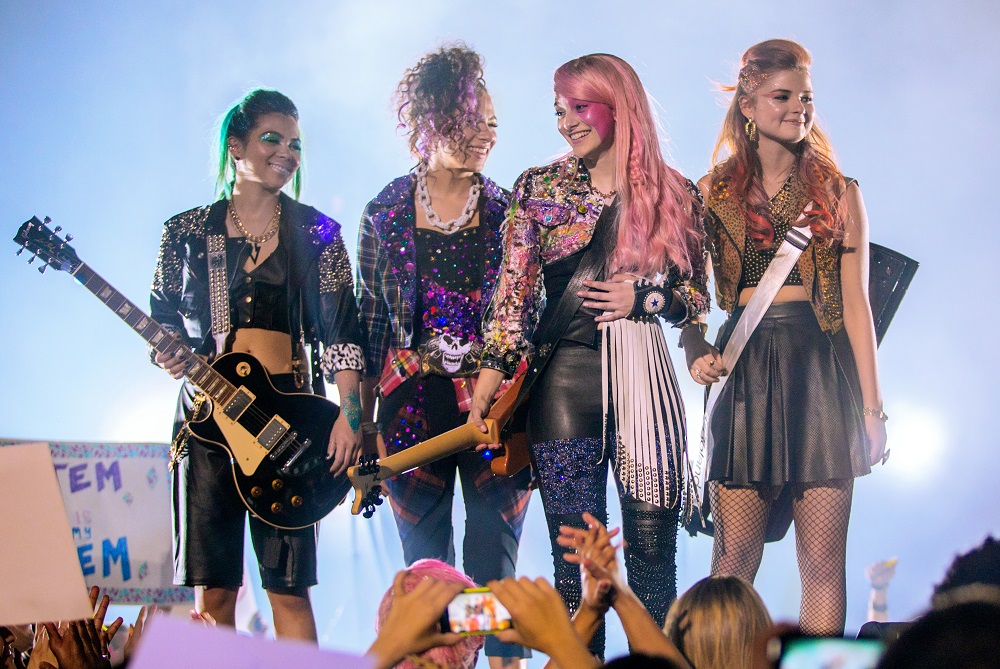 Jerrica Benton (Aubrey Peeples) is a shy, introverted teenager living with her free-spirted Aunt Bailey (Molly Ringwald) along with her sibling Kimber (Stefanie Scott), moving in after their inventor father Emmet (Barnaby Carpenter) lost his battle with cancer. They are joined by two others, foster kids Aja Leith (Hayley Kiyoko) and Shana Elmsford (Aurora Perrineau), Bailey opening her home to the orphans when both were still little. It’s not typical, for certain, but they’re a family, each having their own idiosyncratic quirk that the others adore making each standout as an individual while also solidifying their bonds as sisters forever. 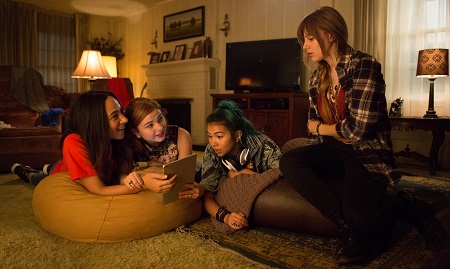 All are musically inclined, but Jerrica is special. On a whim, Kimber posts a video of her big sis on YouTube singing an original composition. Hiding behind some flashy makeup, a pink wig and calling herself ‘Jem,’ the song goes instantly viral, catching the attention of music mogul Erica Raymond (Juliette Lewis). She wants to sign the teen to a music contract, make all her dreams a reality, bringing Jerrica and her three sisters to Los Angeles, under the supervision of her college-aged son Rio (Ryan Guzman), to experience stardom firsthand.

I cannot make the case that Jem and the Holograms,director Jon M. Chu (G.I. Joe: Retaliation) and screenwriter Ryan Landels’ reinvention of the iconic 1980s cartoon series “Jem,” is a good movie. I cannot try to convince anyone that it is an important piece of cinema we’re going to be talking about decades from now. I cannot claim fans are going to forgive the fact it bears almost no resemblance to the show that inspired it, the fantastical aspects gone, in their place a straightforward drama about the price of stardom we’ve seen umpteen times before.

Be that as it may, it’s impossible to dismiss this rather innocuous and benign adaptation out of hand. There are some amazing ideas, some startlingly good moments, most of them revolving around modern obsessions with living life online, sibling relations, fandom and bullying that took me quite by surprise. The best involve Chu and Landels bringing a variety of YouTube videos into the proceedings, most of them confessionals of fans of ‘Jem’ and her bandmates who have found a variety of reasons to be affected by her music and lyrics. While fictional in nature (obviously), there is a universal truth to what they’re all confessing that hits home, the variety and diversity of the YouTubers in question something unique and special.

It should also be said, even though it’s girl-power roots and modern pop esthetics are obnoxious, the original music in this movie is really, really good, two of the songs in particular. There’s an out-of-nowhere, supposedly impromptu a cappella number on the beach that begins as if it’s an absurd joke before transforming into magic, the way it celebrates the bond of the sisters-slash-bandmates sublime. Then there is the requisite solo number, Jem/Jerrica taking the stage sans her Holograms belting out a powerfully moving ballad that took my breath away.

All of which are good things, which is important because almost all other aspects of the narrative are pretty much bottom of the barrel. Things follow a fairly standard A Star is Born template, Erica attempting to manipulate Jerrica into becoming her manufactured pop princess jettisoning her sisters and her own singular voice in order to inhabit a prefabricated and easy to package persona. She, of course, doesn’t want that, but with Aunt Bailey in danger of losing the house things are more complicated than her sisters know, making the evil music executive’s overtures far more appealing than they otherwise would be.

What’s crazy is all of this happens in the course of a month. Jerrica and her sisters become international superstars overnight, in-fight like The Beatles after Yoko came into the picture days later and reunite like The Eagles two-plus decades after calling it quits practically seconds after that. They go from “American Idol” fans eager to audition to seasoned Kelly Clarkson meets Carrie Underwood icons in no time flat, everything transpiring with a matter-of-fact supercilious whimsy it all can’t help but to become laughably absurd.

Then there is an additional subplot regarding Jerrica and Kimber’s dad Emmett and a cute little whistling robot named Synergy. Remember Interstellar? How Matthew McConaughey’s heroic astronaut seemed to have all sorts of love in his heart for his super-smart daughter but apparently couldn’t have cared less how his not-so-sharp son was fairing on a dying Earth? That’s nothing compared to how Emmett apparently felt about Jerrica over Kimber, the fact a dad would do so much for one child and nothing – absolutely nothing at all – to such a jaw-dropping degree for the other close to repellant.

I don’t know. I can live with the fact Jem and the Holograms has practically nothing to do with its animated namesake. I equally love the way Chu handles the musical numbers, his time spent bringing Step Up 2: The Streets to life (not to mention two Justin Bieber concert documentaries) giving him more than a solid understanding as to the best way to make all of those sequences sizzle. Finally, while I’ve never watched “Nashville” it’s safe to say Peeples is the real deal as far as talent is concerned, the actress making the most of her moment in the spotlight much in the same way the character she’s portraying in the film does at the exact same time.

But the movie is just dumb. It almost doesn’t matter if the actresses portraying the Holograms are good or that Lewis saunters and struts through the picture with a rock star bravado allowing her to steal nearly every scene she’s a part of. My heart more often than not just wasn’t in it, the fact the priceless bits are sensational only making the stuff that doesn’t work that much more catastrophic. Funny thing, even with that being so, I still kind of want to like Jem and the Holograms in spite of all its missteps and shortcomings, and if that isn’t truly outrageous in and of itself I’m not sure what else would be. 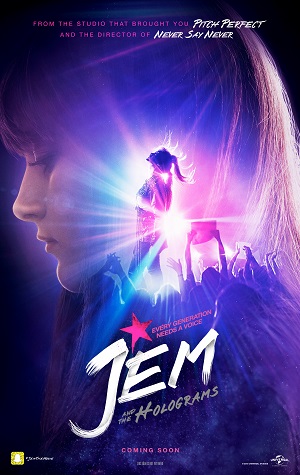