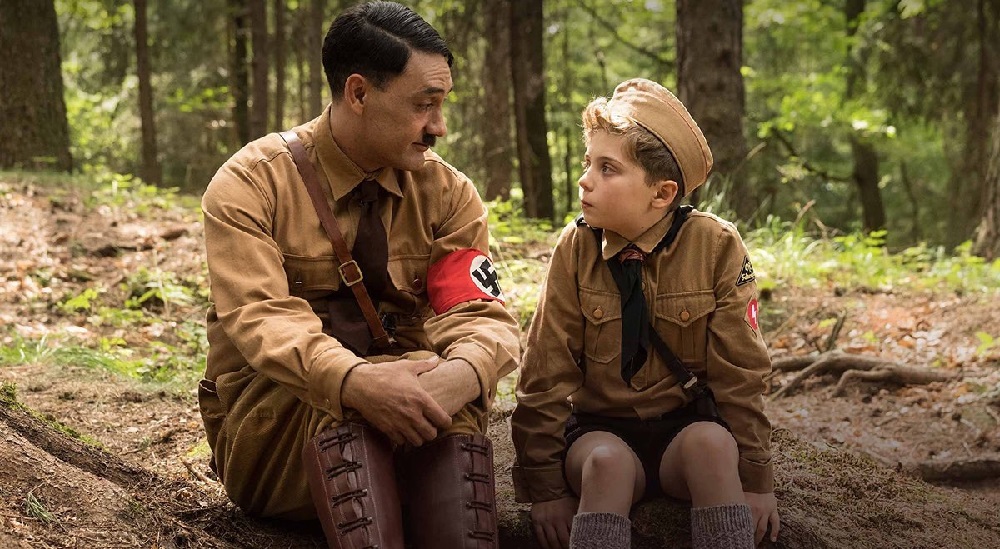 In the small German town of Falkenheim, 10-year-old Jojo Betzler (Roman Griffin Davis) lives with his perpetually perky single mother Rosie (Scarlett Johansson) who consistently attempts to see the best that life has to offer even though WWII currently rages around them. With few male role models and being inundated with propaganda on a constant basis, Jojo’s imaginary friend urging him to become the best little Nazi he can be is none other than Adolf Hitler (Taika Waititi). After an accident involving a hand grenade leaves her son with a small facial scar and a noticeable limp, Rosie insists German military official Captain Klenzendorf (Sam Rockwell) give the boy a job and provide him with proper male leadership while she is at work. Jojo is overjoyed by this turn of events, and urgend on by Adolf he becomes even more certain in his belief everything the Third Reich is doing is for the greater good no matter how strange, unusual or even downright evil it might sound to be.

Home alone one afternoon, a noise coming from his sister’s empty room startles Jojo. Ever since she died neither he or his mother go up there, so a thump coming from that location is a bit mysterious. Investigating, Jojo discovers a teenage Jewish girl, Elsa (Thomasin McKenzie), living within the walls. Knowing he can’t turn her in as doing so would mean his mother would be held accountable for hiding her, with Adolf’s wary approval the boy decides to study this strange Jewish creature instead. But as Jojo and Elsa spend more time together the pintsized Nazi begins to suspect everything he’s been told about the war, about this new German Reich and especially about Jews might be a bunch of hogwash, and all appearances to the contrary he hasn’t the first clue as to what he should be doing with that sort of information.

Winner of the Toronto Film Festival audience award for Best Picture, writer/director Taika Waititi channels his inner Charlie Chaplin with his undeniably controversial dark WWII comedy Jojo Rabbit. Based on author  Christine Leunens’ best-selling 2004 book Caging Skies, this movie literally hits the ground running as it wastes no time whatsoever to present its core ideas, Jojo and Adolf sprinting, jumping and cavorting through Falkenheim streets as they head out into the woods so the boy can join the Jungvolk, otherwise known as the Hitler Youth. It’s a startling opening that purposefully raises an eyebrow, and forgive me if I immediately wondered if Waititi, for all his talent and ability as an insightful and ambitious comedic storyteller, was going to be able to pull this one off.

I shouldn’t have been worried. Waititi balances the horrifying and the hysterical with relative ease. He rarely overplays his hand, the emotional gut-punches that happen throughout never feeling overly melodramatic and instead always seem to come from a place of heartrending honesty that allows them to hit home in ways they never would have been able to accomplish otherwise. This is a tale that takes dead-aim at the gruesome horrors of WWII and forces the viewer to see them through the eyes of a child. Waititi shows how continuous propaganda coupled with a boisterously blustering leader spouting never-ending verbal waterfalls of hatred and lies can manipulate even the most compassionate minds to think the most ghastly of thoughts. In other words, Thor: Ragnarok this film is not.

But for fans of Waititi’s other features, notably What We Do in the Shadows and Eagle vs Shark, his ability to mine such complex character-driven territory won’t come as a surprise. Reminiscent of Ernst Lubitsch’s 1942 classic To Be or Not to Be (remade by Mel Brooks in 1983), Jojo Rabbit fearlessly shows the absurdity of the Nazi argument by emphasizing its effectiveness in poisoning so many German hearts and minds, especially as this pertains to children. It’s blatant nonsense, made all the more apparent anytime Jojo’s imaginary friend Adolf comes calling and starts nonchalantly speaking his tried and true brand of venom and bile. These moments are an uncomforting mixture of hilarity and horror that became even more hauntingly heartbreaking as the child at the center of all the carnage begins to see with eyes unclouded of hatred and disinformation.

It doesn’t always work, and sometimes the balance just felt off. A sequence where the Gestapo, led by a creepily good-natured Stephen Merchant, comes into Jojo’s house for a random search never struck a satisfying tone as far as I was concerned, and it was only when Rockwell forces his way into the scene did I begin to feel like Waititi was getting a handle on what set of emotions he wanted to procure from the audience. That opening half-hour, especially the stuff involving the Jungvolk, is haphazard in its execution, and it is only when Johansson assuredly struts into the frame and takes charge of all that is happening did I move forward in my seat and find myself eager to discover where things were going to go to next.

The acting is universally spectacular, however, both Davis and especially McKenzie making an indelible impression. The film is also stunningly shot by Mihai Malaimare Jr. (The Master) and magnificently realized thanks in large part to Ra Vincent’s (Thor: Ragnarok) production design, while Mayes C. Rubeo’s (John Carter) colorfully creative costumes are some of the best I’ve seen this year. More importantly, Waititi offers up a final 30 minutes that took my breath away, where his film goes and how it ends up resolving itself putting a skip in my step, a laugh in my throat and a mournful pain in my heart that took me by almost complete surprise.

Much like The Producers, Life is Beautiful or The Great Dictator, I will totally understand when there are viewers who watch what Waititi has done here and shake their heads in disappointment and anger. This type of dark humor, especially as it relates to children, will undoubtedly hit some the wrong way, how it balances comedy, drama, horror and suspense not something everyone is going to feel is appropriate or justified. But I found Jojo Rabbit to be terrific, its playful demeanor concealing a haunting prescience that transcends its war-torn 1940s setting and becomes as unruly an indictment of current political and social events as anything 2019 has had the guts to offer. 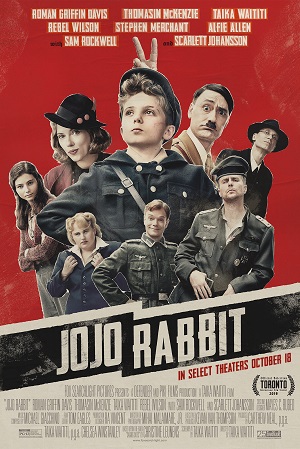