A century in the making, Disney’s John Carter is a superlative cinematic fantasy that’s the single most entertaining thing I’ve had the pleasure to see in 2012 so far. Based on the stories by Tarzan impresario Edgar Rice Burroughs, the author’s Princess of Mars providing the basis for this initial adaptation, directed by Pixar giant Andrew Stanton (Finding Nemo, Wall•E) and with a screenplay by Stanton, Mark Andrews (“Star Wars: Clone Wars”) and Michael Chabon (Wonder Boys), this is a literate, highly intelligent and pleasingly multilayered epic that had me wanting to leap from my theatre seat and cheer.

The story is far too complex to go into in great detail, the basics revolving around widower and Civil War cavalry hero John Carter (Taylor Kitsch) searching for a fabled cave of gold and mysteriously transported to the vast deserts of Mars. Once there, he comes into contact Tars Tarkas (Willem Dafoe), a lizard-like nine-foot tall creature with four-arms who is the leader of the Tharks, one of the planet’s major inhabitants.

The other two species residing on Mars, called Barsoom by the natives, are the Zodangans, led by the evil Sab Than (Dominic West), and the Heliumites, ruled by the benevolent Trados Mors (Ciarán Hinds). The former has been given an all-powerful weapon by Matai Shang (Mark Strong), an ephemeral being who claims to have direct ties with the mystical forces all creatures on the planet pray to. In order to protect his people from Armageddon, Trados Mors succumbs to Sab Than’s demands that he be given his daughter’s hand in marriage, a turn of events the young princess Dejah Thoris (Lynn Collins) finds unconscionable and forces her to flee into the desert.

It gets far more convoluted and crazy from there, Dejah Thoris hooking up with Carter thanks to his spectacular intervention during her escape which also makes him a hero to the Tharks and a point of worry for Matai Shang. One thing leads to another and soon the two humanoids, joined by Tars Tarkas’ secret daughter Sola (Samantha Morton), are racing across the deserts of Barsoom in order to decipher the truth behind Carter’s arrival and maybe even a way to stop Sab Than before he destroys the planet.

I get that this all sounds a bit familiar. James Cameron has said multiple times Burroughs’ stories were a major influence behind Avatar, George Lucas voicing the same in regards to Star Wars. From Flash Gordon to Battlestar Galactica to Superman to even schlocky silliness like Transformers and TRON, it’s hard to imagine any of those stories existing if John Carter’s adventures hadn’t preceded them. Heck, even the great scientist Carl Sagan had a map of Barsoom hanging on his doorway outside his office at Cornell University, so the influence these stories have had is fairly far-reaching to say the least.

So why hasn’t anyone attempted to tackle Burroughs’ writings up until now? Well, a lot of filmmakers have tried; they just couldn’t figure out the best way to do it. John McTiernan probably came the closest to seeing a project become reality, but even he gave up when he realized the technology didn’t exist to do these tales justice, and even though he had Tom Cruise attached to star, the filmmaker still felt it best to move onto other projects.

By injecting Burroughs (Daryl Sabara) into the story, by giving the film a dusty, Sergio Leone meets John Ford look, Stanton, Chabon and Andrews have managed to unlock the writer’s stories in a unique way that ends up making them even more emotionally affecting. They’ve given the film an intimately human dynamic that goes beyond the spectacle, the special effects and the impressive motion capture, crafting a science fiction adventure that feels immediate, personal and most of all real.

The filmmakers treat their audience with respect, allowing the viewer to figure out what is going on without a need to spell it out in bright shiny letters. Not there the still aren’t times where they can’t seem to help themselves (Thoris’ exclamations when she finally believes Carter is in fact from Earth is pretty silly), but overall their use of restraint is magnificent, and for an adventure overflowing in eye-popping spectacle the level of narrative restraint is honestly impressive. The best moments involve Carter’s initial arrival on Mars, his flailing and falling as he tries to learn how to move his body around in this new gravitational terrain, as well as his first interactions with Tars Tarkas, the two humorously trying their best to communicate and learn one another’s names a giddy delight.

Speaking of Tarkas, much like the debate that was had last year in regards to Andy Serkis’ work in Rise of the Planet of the Apes, here come another pair of performances that should once again spark discussion over just how awards-worthy motion capture by actors should ultimately be. Both Dafoe and Morton are superb, easily creating the film’s two most memorable characters, their work a symphony of emotion and nuance that held me spellbound.

There are issues, familiarity thanks to all those aforementioned other adventures that were inspired by Burroughs’s source material sadly one of them. But the biggest hiccup is that, no matter how hard West tries, no matter how much he wants to be the king of despicable villainy, Sab Than just isn’t very interesting. He’s kind of a wet noodle, and it’s never in doubt what Carter is going to make of him when the time comes. The dude just isn’t scary, and one gets the feeling Stanton and company are treating him more like an afterthought as their desire to set up Matai Shang as the true baddie in a potential sequel keeps getting in the way of allowing West to make a lasting impression.

Not that I care. The bookends to this film border on brilliant, and the way the filmmakers set up events and then bring them to their culmination is consistently glorious. Stanton, much like Brad Bird did late last year with Mission: Impossible – Ghost Protocol, moves from animation to live action with ease, staging both dramatic and action sequences with unwavering confidence. John Carter is a treat, and here’s one vote hoping that box office receipts are high enough Disney decides a second trip to Barsoom ends up being a worthwhile investment. 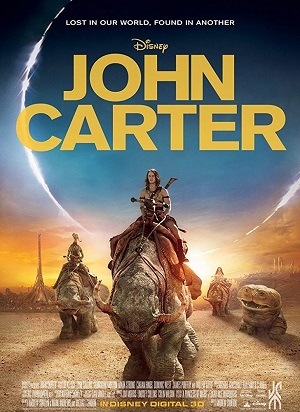