Cantankerous blind Vietnam vet Ambrose McKinley (Nick Damici) has been moved into a spacious retirement community by his well-meaning, if slightly clueless, son Will (Ethan Embry). He’s welcomed by his kindly next door neighbor Delores (Karen Lynn Gorney), but before they can start up something even passing for a friendship she’s devoured by a monstrous animal. Additionally, the former soldier’s beloved dog is also killed during the attack, leaving him in a state of inconsolable grief. 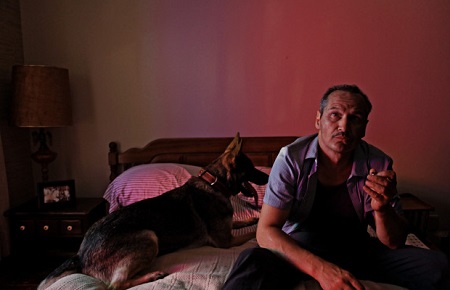 Ambrose is convinced the creature was a werewolf. Vowing revenge, he sets out to discover who is hiding a monstrous secret. The chain-smoking Father Roger (Tom Noonan)? The nattering busybodies Clarissa (Tina Louise), Gloria (Rutyana Alda) and Emma (Caitlin O’Heaney) who seem obsessed with bringing him casseroles and cakes in attempts to soften his rough edges? Griffin (Lance Guest), the local schmuck who runs the shuttle to the church every Sunday? They’re all suspects, and come the next full moon there will be a reckoning as this old soldier, blind as he may be, will make a stand against the wolf at his door and put it down like the rabid dog he believes it to be.

Late Phases plays as if director Adrián García Bogliano (Here Comes the Devil) and writer Eric Stolze (Under the Bed) shared a dual desire to combine Death Wish, An American Werewolf in London, Wait Until Dark, Cocoon and Fright Night into a single motion picture. Revolving things around a cranky old curmudgeon who isn’t the easiest guy to warm up to, the movie presents its central mystery with little artifice, almost no useless subplots or side stories, keeping things focused on Ambrose’s desires to get revenge for his dead dog and make one final militaristic stand while he’s still able to.

Shades of John Wick notwithstanding, this is as old school a 1970s-style B-grade horror opus as anything to have hit theaters this year. Not playing to convention, refusing to throw in modern stylistics or pander to a teenage audience, the movie is a full-throated creature feature that moves at its own measured pace. It is more interested in crafting three-dimensional characters than it is in throwing gore at the screen or pausing for an action and/or scare sequence every five minutes. As such it becomes a lot more involving, and entertaining, in the process.

The restraint on Bogliano’s part is refreshing. At the same time, there’s not a heck of a lot to Stolze’s script, so even at a short 95 minutes the film does drag some, especially during the midsection where Ambrose goes back and forth between the retirement community and the local church. A lot of the discussions he and Father Roger engage in spell things out much too clearly, hammering themes home with too much force considering none of them are exactly ethereal or difficult to comprehend.

Yet there are some great, uncomfortably eerie sequences sprinkled throughout, the initial werewolf attack taking out Delores and Ambrose’s dog effectively shocking. There is also some great use of humor, especially revolving around the creature’s decision to beef up its numbers in order to take on the determined, if blind, soldier, how they go about doing so making me chuckle with satisfaction. Finally, the film is superbly shot by Ernesto Herrera (Cold Sweat), the cinematographer achieving an unnerving visual elegance that’s disquieting. 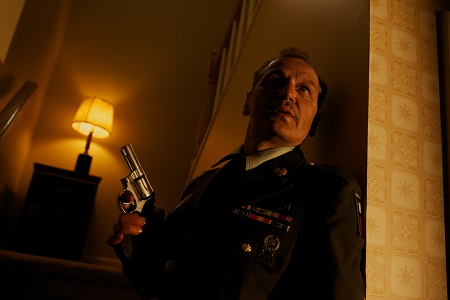 But the ace in the hole is veteran character actor Damici. A frequent collaborator with rising writer/director Jim Mickle (including this year’s smashing modern Texas noir Cold in July), he slips into Ambrose’s skin with ease. You know exactly who this guy is right from the start, his stoic demeanor masking the scars of battle and regret that have only been augmented by his rapidly diminishing eyesight. Damici grabs this horror effort by the tail and refuses to let go, delivering a powerfully nuanced performance that builds in intensity and tenacity as things progress to their relatively forgone conclusion.

Late Phases doesn’t have the staying power of Bogliano’s Here Comes the Devil. It doesn’t resonate  in nearly the same way. But it’s awfully entertaining, delivering on its premise while building to a blood-splattered, rip-roaring finale that sees Ambrose understand what it really is he’s fighting for and thus finding the inner strength to do so in the process overcoming his obvious handicap. While not a great werewolf movie, it’s still a very good one, and having already watched it twice I almost can’t wait until the opportunity arises to see it again. 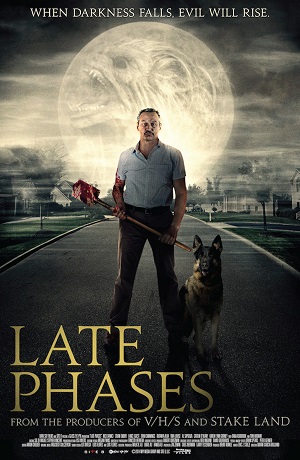