While lecturing in China and researching an ancient legend about a small village in a constant war against vampires, Professor Lawrence Van Helsing (Peter Cushing), the vaunted vanquisher of none other than Dracula himself, is recruited by the warrior Ching (David Chiang) to do battle once again against the forces of the undead. They are joined by the young man’s highly skilled brothers (and one sister), Van Helsing’s son Leyland (Robin Stewart) and wealthy actress Vanessa Buren (Julie Ege) who finances their expedition into the Chinese countryside.

A collaboration between martial arts maestros The Shaw Brothers (One-Armed Swordsman, The 36th Chamber of Shaolin) and England’s house of horror Hammer Studios (Horror of Dracula, The Curse of Frankenstein), 1974’s The Legend of the 7 Golden Vampires is certainly unique. Featuring Cushing in his last go-around as Prof. Van Helsing (still fighting his signature foe, I might add) and introducing the world to kung-fu firebrand Chiang (a Chinese icon still working today), this is about as odd an action-horror hybrid that’s likely ever been made. In many ways it was far ahead of its time, the precursor to modern efforts like Aliens and Dog Soldiers (not to mention a bevvy of Chinese language efforts that combined supernatural terror and martial arts action over the past four-plus decades), this strange little cocktail of gothic delights, high-flying fisticuffs, swordplay and zombie disembowelment a one-of-a-kind adventure that’s marvelously entertaining for those viewers open to its charmingly surrealistic eccentricities.

Directed by genre veteran Roy Ward Baker (The Vampire Lovers, Quatermass and the Pit), who received an uncredited assist from Chinese filmmaking legend Chang Cheh (Five Deadly Venoms, Trail of the Broken Blade), the movie more or less begins as one of Hammer’s prestige Dracula pictures (only sadly without the presence of Christopher Lee), the opening scenes even taking place in a creepily lit English castle. But once events move to China all bets as to what is going to happen how events are going to transpire are suddenly off. The moment Van Helsing agrees to travel to the isolated village I could definitely see the handoff from Baker to Cheh, an explosively bloody battle between Ching, his siblings and an enemy clan suddenly taking center stage.

From there all bets are off, and other than the elder Van Helsing (Cushing was still a Hammer superstar, after all) it’s a continuous question as to whether or not any of the primary cast members are going to make it out of this gruesome little adventure alive. There’s a terrific battle in a cave between a handful of the seven evil vampires, their zombie horde and the Ching family, while the climactic face-off at the besieged secluded village is well worth the wait. It’s just a lot of crazy, over-the-top fun, Cushing and Chiang proving to be a winning pair as they wage their eternal war against the forces of darkness.

In typical Hammer fashion the actual climax is a bit sudden (and, in this instance at least, slightly underwhelming), and I can’t say all of the East-meets-West storytelling elements work as comfortably as I frequently wanted them to. None of which makes The Legend of the 7 Golden Vampires any less entertaining, discovering this Hammer/Shaw Brothers production a true joy and am glad the folks at Scream! Factory took the time dig this one out of the vaults for all of us to see.

The interview with Chiang is pulled from a longer program focusing on his entire career. The interview with author and film critic Baker, who is not the Oscar-winning makeup designer of An American Werewolf in London fame, is an informative and entertaining piece that revels in his obvious affinity for the film. Not sure I agree with him that it is the “best Hammer film of the 1970s,” though. As entertaining as this one is that feels like something of an obvious stretch.

I’d also avoid The 7 Brothers Meet Dracula cut of the film. It didn’t do a lot for me.

The Legend of the 7 Golden Vampires is a heck of a lot of fun. This Hammer/Shaw Brothers co-production a wild ride worthy of a look, maybe even more than one. Scream! Factory’s Blu-ray release is downright exceptional, and for fans of this cult favorite this release comes highly recommended. 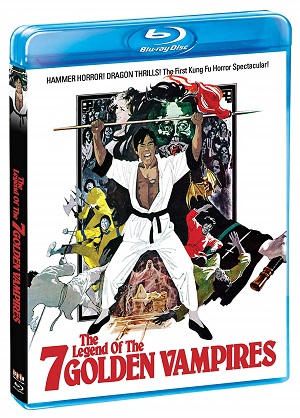