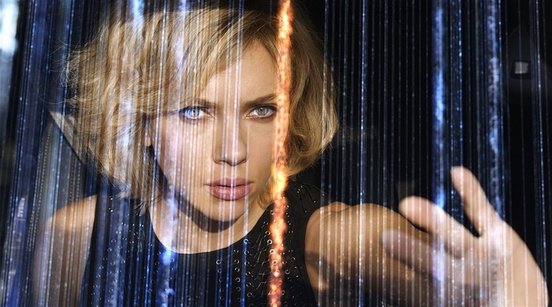 Lucy (Scarlett Johansson) is a free-spirited young college student studying abroad in Taiwan. Her low rent sometimes boyfriend Richard (Pilou Asbæk) tricks her into delivering a mysterious briefcase to underworld titan Mr. Jang (Min-sik Choi), things quickly going from odd to bad to worse in a matter of seconds. Knocked unconscious, when she awakes there’s a scar on the woman’s abdomen and a clandestine mission being assigned to her, a bag of drugs implanted inside her gut in hopes she’ll be able to get it out of the country undetected.

There’s a confrontation. The bag is accidentally ruptured during the assault, its content leaking into Lucy’s bloodstream. Her whole world suddenly changes in an instant, the secrets of the universe slowly revealing themselves as more and more of her brain finds itself being put to use. Two things become clear, the first being that she must seek out help to more fully understand what it is that’s happening to her. The second? That’s easy. This drug cannot go onto the open market, Lucy ready to do whatever it takes to make sure Mr. Jang is stopped and his organization destroyed forever.

Sounds straightforward enough, right? Wrong. Luc Besson’s latest female-driven spectacular (this is the man behind La Femme Nikita, The Professional and The Fifth Element, after all) Lucy isn’t even remotely what one thinks it is going to be. Lucy takes familiar genre tropes found in science fiction, Asian action flicks and superhero origin stories and slyly turns them on their head, crafting a freewheeling satire that’s as inspired as it is loony. Besson soars to metaphorical heights I can’t say I ever saw coming, the idiosyncratic filmmaker using the audience’s expectations against them in order to craft a feature that’s virtually as far outside the norm as anything released this year. 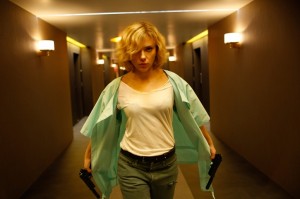 Granted, the director’s adolescent tendencies, which even in his mid-50s he flaunts without embarrassment or shame, can still get the better of him, Besson as infatuated with the razzle and the dazzle as he’s ever been at any point during his noteworthy career. There are more over-the-top elements here than one can shake a stick at, a bizarre car chase through the streets of Paris and a loopy, The Matrix-style shootout inside the halls of a prestigious University as half-baked as they are eye-popping. More than that, he loves to fetishize the violence to absurd heights as much as ever, reveling in every gunshot, drop of blood and explosion as if they were the greatest things in all of cinematic history.

Yet I’m okay with all of that. The more I think on it, the more Lucy begins to intoxicate me. The first half is especially awesome, our heroine’s descent into brain-augmented single-mindedness absolutely fascinating. With every power she starts to possess, more the secrets of the history of Earth and of the universe itself begin to come into clearer focus. The woman who was once prey now becomes predator, seeking out those who did her wrong not so much to exact justice but to make sure what happened to her doesn’t happen to anyone else. There’s a flippant lunacy to how Besson depicts these things, juxtaposing footage of animal in life and death struggles in the wild with visions of Lucy flipping the script and evening the metaphorical playing field.

Johansson is incredible. She follows up her astonishing work in Under the Skin (a movie that’s not as far removed from this one as you might initially think) with another wonderful bit of work, going from flighty collegiate to emotionless omnipotent deity with subtle, emotionally captivating tenacity. She does some of the best character work of her career here, little scenes enlivened in ways that are surprisingly magnetic the actress producing laughs, cheers, tears and wide-eyed looks of shock with believably authentic grace and resilience.

It’s hard to know what to make of the rest of the internationally flavored cast. Morgan Freeman is his typically measured and authoritative self as a scientist fascinated with the workings of the human brain, Choi has an easygoing predatory carnivorous side to his devilish persona that’s suitably unsettling. But best of all might just be Amr Waked as an incredulous French detective brought into Lucy’s crazy, messed-up tale thinking he’s going to be the hero only to discover he’s nothing more than the helpless sidekick. His continued looks of shock, awe and surprise are absolutely spot-on, and I couldn’t help but warm to him considerably as things progressed. 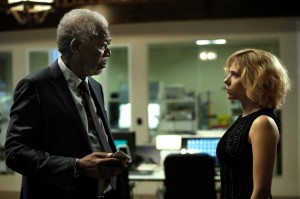 At the same time, Besson doesn’t exactly give any of them a whole heck of a lot to do. He’s more interested in looking back on the dawn of humanity, seeing dinosaurs rampage in all their glory and watching New York’s Times Square almost instantaneously devolve back to it primordial roots then he is anything else. It’s almost as if the director wants to craft his own 2001: A Space Odyssey, his own The Tree of Life, just making sure he does so in a way that fits inside his bloody, violent and hyper-realist filmography of quirky nuttiness.

It goes without saying this won’t be for everyone. Heck, I’ll go out on a limb here and now and state I think the majority of domestic U.S. audiences who end up buying a ticket are going to be so perplexed by what it is they’re watching it’s likely they’ll end up hating the darn thing.

But not me. Not for a second. Lucy is absurd. It’s unhinged. It’s eccentric in the absolute extreme. But it’s also made by a director with a confident vision that does not waver, not for a single second, and that to my way of thinking is a grand thing not to be taken lightly. Heck, once Johansson’s sublime performance is factored into the equation, the movie becomes even more of a one-of-a-kind marvel, the finished product a sci-fi curiosity I’d happily revisit with no reservations whatsoever. 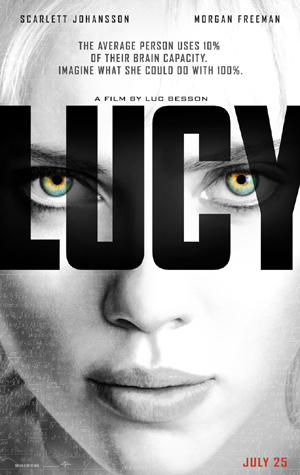