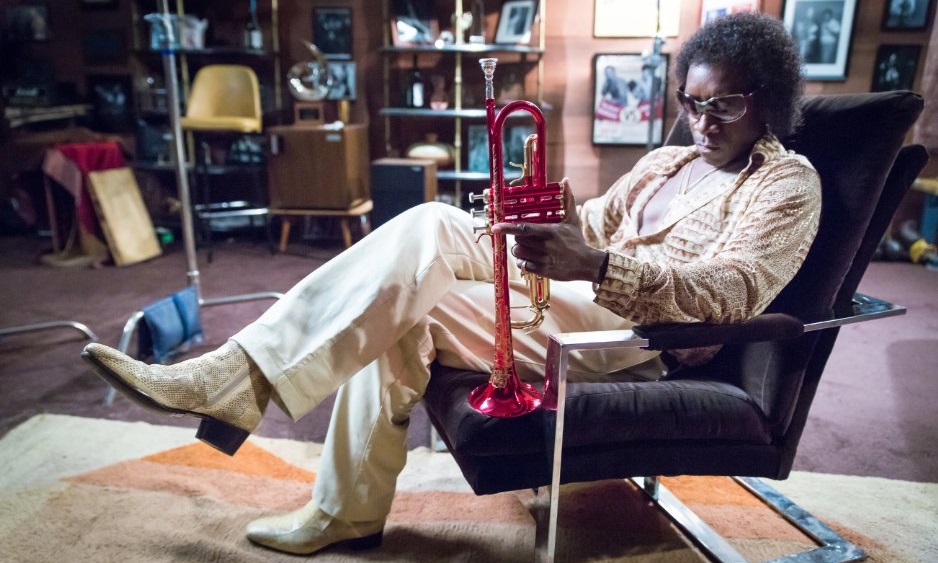 Impressionistic Miles Ahead a Jazzy Riff on Musical Genius

When I was in second grade I started playing the trumpet. I kept playing it until my sophomore year in high school when, for a variety of reasons that are fairly standard for any random teenager, I decided to place my brass instrument back in its case and moved on to other activities. Even so, I can still play John Williams’ theme from Superman as well as Chris Kenner’s “Land of a 1000 Dances” (a marching band staple) pretty much from memory, and my love for the instrument is as strong today as it ever was in my youth. 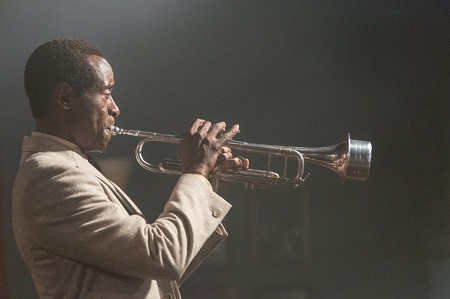 It was through the trumpet I discovered Chet Baker, Louis Armstrong, Dizzy Gillespie, Wynton Marsalis and Herb Alpert. It was through the trumpet I fell in love with classical, big band, blues and jazz. Through the trumpet I was able to discover Miles Davis, his albums Sketches of Spain and Kind of Blue ones I could play over and over without ever growing tired of. His gifts were apparent right from the first note, and while I did stop playing the instrument myself, my love for it never died and, if anything, is as strong today as it ever was as a kid, a fact at last partially due to my adoration of Mr. Davis.

With all that being so, it’s no wonder I was excited to get a look at actor Don Cheadle’s directorial debut Miles Ahead. Not so much a biopic of the groundbreaking musician as it is an improvisational riff utilizing elements of his life to tell its tale, the movie gets under Miles Davis’ skin in ways that are distinct, individualistic and intriguing. Cheadle, co-writing the impressionistic script with Steven Baigelmanv (Get On Up) after coming up with the story with two other writers, attempts to bring this musician into focus, warts and all, keeping the attention on the music above all else, which, considering the subject matter, is exactly as it should be.

Set during the five-year period during the late 1970s when Davis went into a form of self-retirement and seclusion, the film imagines a surreal series of events involving the jazz man (Cheadle), a British freelance journalist named Dave Brill (Ewan McGregor) hoping to nab an exclusive, a thuggish music producer (Michael Stuhlbarg) wanting to score a recording deal for a talented new client (Keith Stanfield) and a missing session tape the trumpet player isn’t ready for anyone, especially executives at his label, to hear. Intermixed into things are remembrances of Miles’ romance and marriage to dancer and singer Frances Davis (Emayatzy Corinealdi), their love story filled with as much pain as passion, as much love as tragedy.

It’s a fascinating way to look at the man’s life, all of it having the same free-flowing, anything-can-happen vibe as any of Davis’ more essential recordings. It helps that Cheadle the actor throws himself into things with outright abandon, stripping himself bare to the bone as he attempts to do this man justice. This is more than a simple impersonation, although it’s obvious Cheadle has done his homework. No, the vaunted character actor digs so much deeper than just being content to become Davis’ modern day mirror image, his constant emotional virtuosity a sensational counterpoint to the nonlinear story beats being presented in their own, eccentrically individualistic fashion.

The stuff dealing with the mission session tape is nothing but a red herring, and whenever the story focuses on it things become less and less interesting. I get why it is there, and I understand how Cheadle and his team utilize this plot, how they orchestrate Davis’ obsessions over the tape to facilitate his daydreams and nightmares relating back to his early days as an up and coming jazz impresario. Most importantly, they fuel his remembrances of Frances, their fiery love affair, romance and marriage depicted with a freewheeling craziness that fits things rather flawlessly. 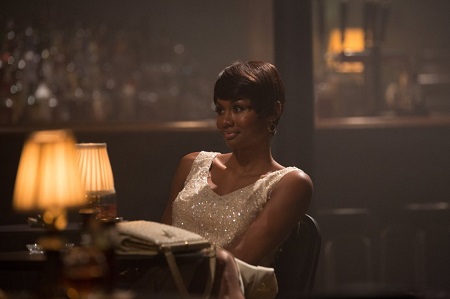 But this plot device is silly, increasingly so as it goes along, Davis and Brill finding themselves in the middle of car chases and shootouts as they attempt to get their hands back on the jazz artist’s recordings. It simply goes on much too long, Stuhlbarg’s unscrupulous producer chewing up far too much scenery, his character coming off as more of a buffoonish cartoon than he does anything close to human.  It’s a weird plot device that never works as fully as the filmmakers obviously intend it to, and whenever the focus shifts entirely to it and to it only, the film stops dead in its tracks almost as if the music has suddenly died and no one has a clear idea as to how to resurrect it.

Still, for jazz aficionados and Miles Davis enthusiasts, Miles Ahead is about as essential a piece of a filmmaking as any they’re likely to watch anytime soon. Cheadle’s fondness for the man and his music is readily apparent. For my part, flaws and all, the greatest thing this movie did was remind me just how much I was inspired and awestruck by this man’s music, his genius as readily apparent now as it ever was during his actual lifetime. 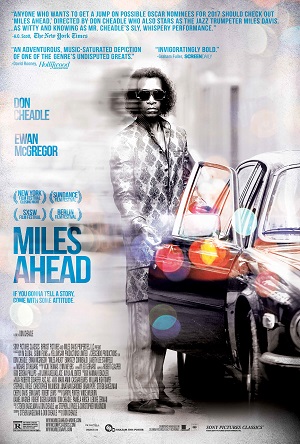