Corporate risk analyst Lee Weathers (Kate Mara) has been called to a secluded research facility to investigate an incident involving behavioral scientist Dr. Kathy Grieff (Jennifer Jason Leigh). While there, she will interview all of the facilities residents, including team leader Dr. Lui Cheng (Michelle Yeoh), chief scientist Dr. Simon Ziegler (Toby Jones), psychoanalyst Dr. Amy Menser (Rose Leslie), physician Dr. Brenda Finch (Vinette Robinson), her husband lab technician Dr. Darren Finch (Chris Sullivan), project manager Ted Brenner (Michael Yare) and nutritionist Skip Vronsky (Boyd Holbrook). Most of all, though, she is there to meet Morgan (Anya Taylor-Joy), the one entity everyone at the facility is there to fuss over.

Scientists playing with genetics is the key element lurking inside science fiction-thriller Morgan, an exceedingly well cast B-movie that also marks the feature-length narrative debut for producer Ridley Scott’s son Luke Scott. Working from Seth W. Owen’s dense, if obvious, script, the filmmaker is great at setting the stage, the feeling of anticipatory paranoia permeating through the facility with Lee’s arrival palpable the moment she steps through the door. It’s the home stretch where he falters, and as the film begins to reveal its myriad of secrets it’s almost as if all involved began to lose interest, and as such caring about the scientists, Morgan or their collective plight become increasingly difficult as things wound down towards their inevitable conclusion.

On the positive side, this movie features a killer group of actresses, all of whom get to play smart individuals who are honored more for their respective intellects than they are for their sex appeal. Almost all of them are allowed to make their mark, even when their screen time ends up being relatively brief, Yeoh and Leslie making the most notable impressions as far as the scientists are concerned. In fact, the only one given a noticeably short shrift is Leigh, the recent The Hateful Eight Oscar nominee apparently only around so she can make an early, and prescient, observation as it pertains to Lee, so otherwise other than picking up an easy paycheck it’s difficult to understand what it was that drew her to the project in the first place.

The key elements, though, are Mara and Taylor-Joy, the latter following up a killer, star-making turn in this year’s horror sensation The Witch with her titular performance here, and both are more than up to the challenge. Their give-and-take is the fuel driving this thriller’s engine, and without them little to anything of value could ever have been accomplished. There is an uneasy understanding that passes between the two I was uncomfortably captivated by, and I was curious as to how one would end up reacting to the other when push finally came to shove and action was unavoidably going to be called for.

Yet, even with Mark Patten’s suitably austere cinematography, Tom McCullagh’s (Starred Up) frigidly impressive production design and Max Richter’s (Testament of Youth) effectively unsettling score, even with the majority of the cast working at a relatively high level, the movie is never able to overcome its more obnoxious shortcomings. Owen’s script, while aiming high, doesn’t offer up much in the way of new ideas. More than that, it telegraphs way too many of its more intriguing twists, spelling things out with obnoxious exactitude. The final confrontations are silly, things devolving into a never-ending game of hunt-escape-chase-fight! I couldn’t wait to see come to an end. 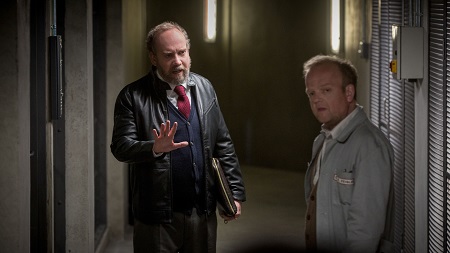 Case in point, there is a marvelously staged and acted sequence between Taylor-Joy and Paul Giamatti (portraying a clinical psychologist brought in to analyze Morgan’s mental state), the two of them engaged in a furiously passionate tête-à-tête that builds in naturally authentic intensity as it goes along. Thing is, as terrific as the two actors are in the scene, and they are close to perfect, the dialogue is a bunch of hogwash, Giamatti’s character acting in a way that is so undeniably stupid one begins to wonder if this supposedly genius scientist is secretly insane. It’s like the performances and the script are working at cross purposes, and what should have been one of the movie’s high points instead becomes nothing short of a head-scratching disappointment.

And that’s the rub. As amazing as the cast is, as visually creative as the younger Scott proves to be, even for a pop science fiction throwback this story ends up being far too stupid to maintain interest in for its entire 92-minute running time. It runs out of steam far too quickly, while the climax is a jumble of idiotic lunacies that grow in eye-rolling magnitude as things roll along. Morgan has its moments, just not enough of them to make up for its ample shortcomings, all of which results in a thriller that doesn’t thrill and a mystery few are going to care to learn the resolution of. 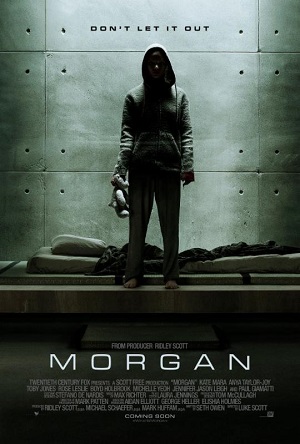