An excitable and outgoing twenty-something named Sam (Caitlin Custer) applies for a job opening at the Raven’s End mortuary run by the mysterious Montgomery Dark (Clancy Brown). As he goes about giving her a tour of the massive complex, Dark tells the young woman a series of increasingly macabre stories involving many of the souls he’s had a hand in laying to rest.

Horror anthologies are tricky to pull off. While most have at least one good story, precious few manage to hold an audience’s interest from start to finish. Worse, many of them have a rather perfunctory and underdeveloped wraparound tale that isn’t anything special, making the final twists and turns fall annoying flat.

This is not the case with The Mortuary Collection. Not only does writer-director Ryan Spindell come up with a terrific wraparound story, but he also crafts four fun and inventive shorts that all stand gruesomely on their own two feet as well. It’s one of the best anthologies of this type I’ve frankly ever seen, and as far as recent entries are concerned this might just be up there with Michael Dougherty’s Trick ‘r Treat as one I’ll happily revisit on a semi-regular basis.

The base story concerns Sam and Dark, each sizing the other up as they wander around the mortuary. Custer is a find. She’s spunky and full of energy. The actress also conceals an electrifying aura of menacing aggressiveness that’s undeniably fascinating. I can’t wait to see what Custer ends up doing next because based on her work here I can only foresee great things in her future.

Brown is Brown, and what I mean is that the veteran actor is flat-out awesome as Montgomery Dark. A legend for his work in pictures like Starship Troopers, The Shawshank Redemption, Highlander and Shoot to Kill, from the first moment he steps into the frame it’s obvious Brown is going to dominate this motion picture with malevolently charming gusto. I adored him in this, and I’m so happy to see one of my all-time favorite character actors getting such a signature role all who watch the movie will be euphorically talking about long after it comes to an end.

The anthology stories are an eclectic set that all still exist in this cartoonishly ghoulish world quite nicely. A young woman at a party seeks refuge in the bathroom and makes the mistake of trying to find out what’s behind a locked cabinet mirror. A stereotypical college frat boy with a secret pass decides he doesn’t need a condom as he attempts to get intimate with a surprisingly eager coed. A devoted husband begins to wonder if his terminally ill and uncommunicative wife would be better off if he prematurely eased her pain. A determined babysitter battles an asylum escapee with a hankering for human flesh.

The effects are great. The makeup is wonderful. The costumes and the sets are top-notch. It’s gorgeously shot by Caleb Heymann and Elie Smolkin. The score from the Mondo Boys (aka Mike Griffin and Mike Schanzlin) suits the film perfectly. All the pieces fit together, and I have trouble coming up with a single aspect of the production I wasn’t suitably impressed by.

The Mortuary Collection is a heck of a lot of fun. I can’t wait to watch it again.

This release is LOADED with extras, and pretty much all of them are great. This is Arrow or Scream! Factory-level stuff here. To say I was impressed by all of the stuff included here would be a serious understatement.

Clever, inventive and consistently amusing, The Mortuary Collection is one of the best horror anthologies I’ve ever seen. This Blu-ray release is superb. It comes highly recommended. 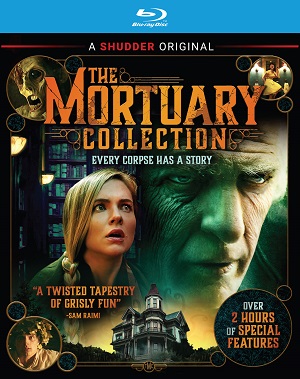