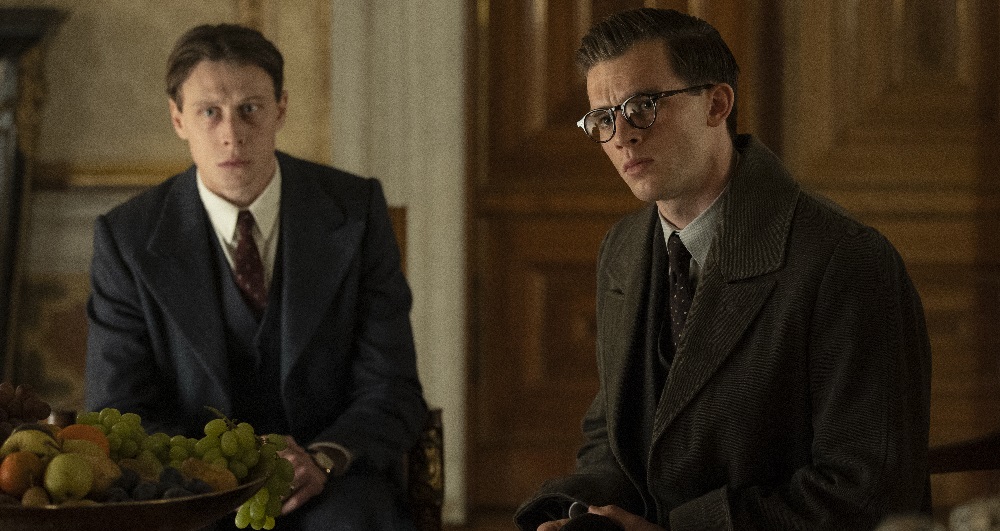 It is September 1938. British Prime Minister Neville Chamberlain (Jeremy Irons) believes he has convinced German Chancellor Adolf Hitler (Ulrich Matthes) to forgo war in Europe and sit down to discuss his country’s desires for territory currently belonging to Czechoslovakia. There will be a conference in Munich, and Chamberlain is certain he and his team of diplomats can come to an agreement that will keep the peace.

Hugh Legat (George MacKay) is an aid to the prime minister whose star is on the rise. Still, he’s surprised to be brought into a secret meeting and told — even though he does not have the experience required to be a part of the delegation — that he is going to join Chamberlain’s team in Munich. Why? Legat’s best friend from college, Paul von Hartman (Jannis Niewöhner), is also going to be at the conference, and even though the two parted on bad terms, according to British intelligence it is imperative they resume their relationship.

Based on the best-selling novel by Robert Harris, the pre-WWII what-if tale Munich: The Edge of War is a sturdy, meticulously crafted ticking-clock thriller I thoroughly enjoyed. While this drama by director Christian Schwochow (The German Lesson) doesn’t do anything unexpected, it’s so well made and so efficiently scripted by Ben Power (The Hollow Crown) that the fact it doesn’t rewrite the espionage rulebook isn’t a big deal. Throw in performances from Niewöhner and the great Sandra Hüller that are nothing less than extraordinary, and this becomes extremely easy to recommend.

It helps that Harris’ source material makes it feel like nonfiction, even though the majority of the plotting is the opposite of factual. But the relationship between Legat and von Hartman is genuine, as are the reasons fueling the angry dissolution of their friendship. Flashbacks to a trip by the former to visit the latter and the third leg of their college triumvirate, Lena (Liv Lisa Fries), on the eve of Hitler’s rise to power are refreshingly sparse. Schwochow refuses to grandstand. Instead, he allows the inherent horror of fascism’s vice-like grip upon the populace to speak for itself, and the rift between Legat and von Hartman is a natural development born from this hostility.

I’m not going to go into the whys behind von Hartman’s turn against Hitler, although it isn’t difficult to ascertain the catalyst that leads him to possibly pass secret information to the British. Even if the reasons for this turn of events are fairly obvious, Power’s plotting of this material and Schwochow’s handling of the mechanics of the reveal are solid. Seeing Legat’s wide eyes as he views the truth for himself is a massive, somewhat disquieting punch to the gut, and I liked how the moment was handled with such brutally gripping sincerity.

Niewöhner is marvelous. He brings a crisp clarity to his performance that I couldn’t resist. The actor’s scenes with Hüller, who portrays a close co-worker of von Hartman’s who hands over information outlining Hitler’s intentions once he gets his way in Czechoslovakia, are mesmerizing. The two play off of one another with hushed eloquence, making even the moments between them when not a word is said out loud speak volumes.

Irons is terrific as Chamberlain. There’s a sly undercurrent of rapscallion wit to his turn as the British prime minister that’s intriguing. While the historical record about Chamberlain isn’t particularly kind, Irons still gives him a fascinating, understated complexity. There are hints that he knows far more about what’s about to happen and how his role in these events will be perceived that, while likely not altogether accurate, are still worthy of discussion.

The weak link, sadly, is MacKay, although I do not think this is entirely his fault. As structured, Legat is a mostly reactive character, forced by circumstance and design to spend the majority of the story continually being shocked, horrified, and/or amazed at everything he is witnessing. Rarely does MacKay get to take charge of a situation, and so I found it difficult to engage with Legat as fully as I would have liked to. The actor does his best; in this case, I’m just not certain his best is enough.

But that’s a minor issue. This is a handsome film, made with precision and care. Schwochow’s handling of the last act is superb, eliciting tension in waves as von Hartman and Legat race against time to reveal the truth to Chamberlain in hopes of stopping Hitler in his tracks before the unimaginable transpires. While history tells us what happens next, that doesn’t make Munich: The Edge of War any less absorbing. It’s worthy of a look. 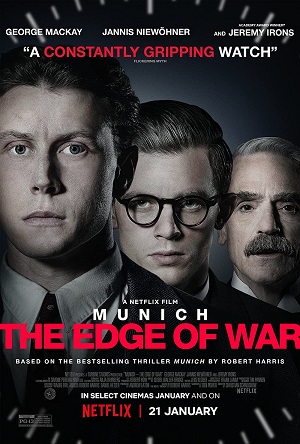