A small gated community located somewhere in Poland. A suburban enclave where the wealthy residents go about their lives purposefully clueless as to anything happening anywhere else in the world. Residents deal with a variety of everyday issues, ranging from loneliness and adultery and parental neglect to life-and-death struggles with cancer and everything that lies serendipitously in between.

Into this world comes immigrant Zhenia (Alec Utgoff). Ukrainian? Russian? Most of the residents don’t pretend to care. But they’ve welcomed this strange, quietly mesmerizing masseur into their well-to-do enclave all the same. Zhenia’s hypnotic presence and magical touch bring something entirely unexpected to every person he comes into contact with, and the people living in this community will have their lives forever changed — whether they want them to or not.

I watched Never Gonna Snow Again twice before sitting down to write this review, and I still don’t quite know what I want to say about the film. Written and directed by Malgorzata Szumowska and Michal Englert (the former having made her English-language debut with 2019’s uncomfortably masterful The Other Lamb), this drama is a surrealistic dreamscape reminiscent of Wim Wenders’ Wings of Desire, Louis Malle’s Black Moon and David Lynch’s Blue Velvet.

I do not make those comparisons lightly. While I have no idea if Szumowska and Englert’s opus will stand the test of time in the same way those classics have, that I can mention it in the same breath as that trio should speak volumes. Themes involving conformity, immigration, gender, economic disparity, depression and climate change are all explored. The beauteous serenity of these examinations are haunting in their comforting elasticity, and the filmmakers generate an uncertain aura of empathetic perceptiveness that’s overwhelming in its tender grip.

The first trip through this community pushed me further toward the edge of my seat the longer it went along. Zhenia introduces the viewer to the comings and goings between neighbors, and it quickly becomes clear why they are all so captivated by the masseur. Even the older children find they have trouble shaking off his penetrating gaze.

It’s an open question how each person is going to respond to his touch. Sometimes, just being there in the room is enough for him to cause a lost soul to start seeing the world in a different light.

This doesn’t mean he’s some sort of divine being sent by a higher power to solve their problems. That’s not the case. At all. For some of these people, it’s an open question as to whether he’s helped them at all. For others, he eases one sort of pain, only to uncover a deeper vein of emotional agony that may never be healed and will always linger like an aching, omnipresent scar.

The whimsical melancholy of this adventure is frequently thrilling. I never knew what Zhenia was going to do or what any of his clients — or their children, for that matter — were going to ask of him next. Through it all, Utgoff is mesmerizing, the rhapsodic intricacies of his performance showcasing a playfully stoic concentration that’s imaginatively unique. Like the residents of this community, I couldn’t have taken my eyes off of Zhenia had I wanted to — the actor delivered in ways so abnormally idiosyncratic that the overall effect he had on me was nothing short of extraordinary.

I’m not going to say anything more. Szumowska and Englert have delivered something marvelously peculiar with Never Gonna Snow Again, and watching it with little foreknowledge has been one of the more profoundly befuddling joys I’ve had this year. 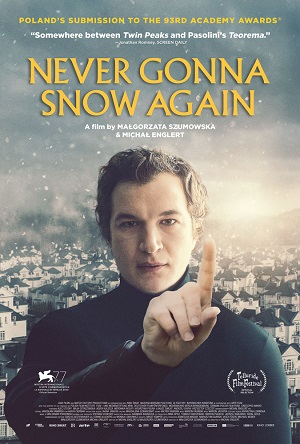