Disquieting Night a Beauteous Descent into the Psychological Abyss

After a pleasant evening with friends, Babak Naderi (Shahab Hosseini) and his wife Neda (Niousha Jafarian) are making the long drive home, their one-year-old daughter asleep in her carseat. Babak is a little drunk yet stubbornly refuses to let Neda drive because she has a suspended license. Both parents are tired, and with Babak’s driving becoming noticeably erratic, Neda insists they stop for the evening at a hotel.

Checking in, the pair are a little creeped out by the unnervingly calm nighttime desk clerk (George Maguire). Things grow even stranger once they’ve retired to their room. Neda answers a knock at the door to find a boy (Amir Ali Hosseini) looking for his mother. Babak has long, intense conversations with his wife in the lobby only to discover she’s been up in their room the entire time. Something is going on that neither of them can explain. Worst of all, the clock keeps ticking but the night refuses to end, and if the pair can’t figure out what is going on it looks like they’ll be trapped inside this hotel in the never-ending darkness for the foreseeable future.

Spooky and unsettling, director Kourosh Ahari’s eerie suspense yarn The Night got under my skin. Much of it feels like a vintage Richard Matheson short story come to life only one with an Iranian immigrant twist, this sly tweak to a familiar haunted house concept adding unforeseen layers of depth. Ahari and his co-writer Milad Jarmooz should be commended for crafting something so universally relatable. Yet they still honor and celebrate their protagonists’ cultural heritage, all of which makes this a fascinating horror spectacle that digs deep and leaves a lasting impression.

Comparisons to The Shining are likely inevitable, the director not going out of his way to hide Stanley Kubrick’s influence on the pace, tone and visual aesthetic of his latest motion picture. But Ahari isn’t nearly as interested in creating an atmosphere or stark, unrelenting terror as he is in examining the ins and outs of a marital relationship where secrets and lies have been coldly and efficiently swept under the rug. This is a personal story of human disconnection, the emotional resonance of what the pair is dealing with impossible to ignore.

The hotel knows what Babak and Neda have been hiding from one another, and it will do whatever is necessary to force them to be honest with one another. It plays with the couple, toys with their perceptions of reality and fantasy, mixing fact and fiction with delicate precision as it messes with each adult’s psyche. The more they refuse to see what is happening, the harder they push against taking responsibility for past actions, the more viciously extreme the unknown entity living inside the hotel shoves back.

Cinematographer Maz Makhani’s camera shrewdly lingers on the seemingly innocuous emptiness of a darkened room only for the corners of the frame to come alive in increasingly uncomforting ways. Ahari keeps jump scares to a minimum, instead choosing to allow the corners and fringes of the frame to produce the majority of the surprises. When things do finally explode into violence, they do so from a place of authenticity propelled forward by Babak and Neda’s actions, the filmmaker keeping things definitively character-driven no matter how strange, surreal or uninhibited events start to become.

Iranian superstar Hosseini is superb, and while he is a long way from his bravura brilliance of The Salesman and A Separation, that does not mean he’s phoning in this performance. He taps into Babak’s insecurities with deft simplicity, allowing this complicated man with a sordid past to come alive in several startlingly unexpected ways. While the things the husband and father are concealing aren’t exactly shocking, the way Hosseini gives them urgency and life certainly is.

Jafarian might be even better. Neda has secrets of her own, and they’ve been internally crippling the young mother in ways she barely knew existed let alone understood were festering into something potentially psychologically crippling. She also has to navigate how events in the hotel are affecting Babak and in turn could put both her life as well as that of their daughter in jeopardy. Jafarian’s emotional gymnastics as she goes through all of this is extraordinary, the sly physicality of her performance a thing of beauty.

The outcome of all this phantasmagoric insanity isn’t all that inventive or original. I must also admit that, even when events rose to the level of life or death, I never felt the danger for Babak or Neda was as lethal as I assume was the intent. But Ahari has still crafted a devastatingly hypnotic yarn of supernatural judgment that kept my eyes glued to the screen. The Night has power, its unyieldingly disquieting unease a beauteous descent into a pitch-black psychological abyss from which there may be no escape. 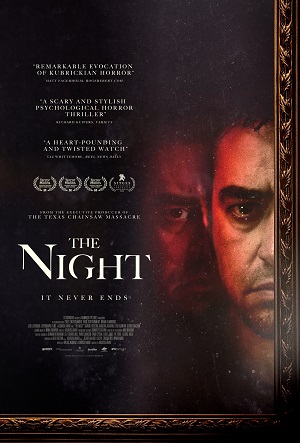