Margo Crane (Kenadi DelaCerna) is no stranger to hardship. Living beside Michigan’s Stark River with her father Bernard (Tatanka Means), the teenager’s mother Luanne (Lindsay Pulsipher) abandoned them both some time ago. Because of that, she’s had to learn how to take care of herself, and in the process has become a crack shot with a rifle and an expert hunter, all under her dad’s watchful eye.

After an earth-shattering tragedy, and before she can be forced to live with her mother’s nearest relative, Margo quietly sneaks away and heads down the river. With a handful of extra clothes, her rifle, a tackle box and a fishing pole, she believes that if she can find Luanne, all will be fine. During her travels she meets a young graduate student (Ajuawak Kapashesit) heading to his first teaching position and makes friends with a cantankerous chain-smoking recluse (John Ashton) suffering from emphysema.

Based on the book by Bonnie Jo Campbell, writer/director Haroula Rose’s narrative feature debut Once Upon a River is a quiet, gorgeously shot meditative sojourn into the unknown. Set in 1977, it is a contemplative coming of age drama centered around a half-Native American main character trying to figure out who she is and where she fits in the world. It is a redemptive tale caked in catastrophic mistakes which lead to terrifying consequences, some of which will leave lasting psychological scars while others conceal the potential for a rejuvenated rebirth that might lead to unforeseen future happiness.

It’s a little disjointed, and I admit to finding it a bit difficult to keep from comparing the film to Debra Granik’s killer double-bill of Winter’s Bone and Leave No Trace coupled with a moderate tinge of Kelly Reichardt’s Wendy and Lucy and Old Joy. But it’s refreshing to see an indigenous spin put on a tale like this, Margo’s trip down the river a bit more introspectively fresh because of this. It also reminded me of Chris Eyre’s 1998 gem Smoke Signals only with a more decidedly pronounced feminine point-of-view, and even if all the pieces didn’t cleanly fit together I nonetheless was eager to discover where things were going to end up.

Not that there are a lot of answers to a bevy of harsh questions. Resolutions are purposefully unfinished. Those wanting to know everything is going to be all right for Margo and that her future happiness is assured will likely come away from watching the movie somewhat unsatisfied. But there is an aura of hope the allows the final moments to shimmer with an undeniable golden radiance. I was moved by where Rose left things, the final images having a hushed cathartic elegance that speaks volumes if one takes the time to listen to what they have to say.

Newcomer DelaCerna impresses, especially considering she’s in virtually every scene and is required to do almost all of the story’s emotional heavy lifting. The plot takes some pretty stunning twists and turns during Margo’s trip, and there isn’t a heck of a lot of time for Rose to dig into many of the more explosive ones with very much detail. This requires DelaCerna to do the work for the filmmaker, the interior components of her performance showcasing what is happening and displaying all the character is feeling without the use of dialogue. She allows Rose to cut down on extraneous bits of exposition that could have slowed down the already measured pace to a tedious crawl, continually keeping things focused on Margo’s internal struggles in the process.

I don’t think the explosion of tragic violence that initiates Margo’s trip down the Stark River is handled particularly well. I found it muddled and disjointed, and this is one point where Rose’s otherwise commendable narrative shorthand did a minor disservice to the overall story as a whole. However, this moment does lead to a riverbank showdown between Margo and one of her cousins that’s hauntingly disquieting, the simple truths stripped naked for all to see overpowering in their subtly expressive simplicity.

There’s more that could be discussed, not the least of which are the ways the filmmakers explore aspects of aging, gender, race, motherhood and healthcare, and even though the setting is the late ‘70s, that doesn’t mean any of these items have become any less current. It’s also gorgeously shot by Charlotte Hornsby, her camera capturing Margo’s trip with a remarkably contemplative specificity that’s richly immersive in its detailed minutia. Once Upon a River is a strong directorial debut, Rose announcing herself as a talented cinematic craftsman worth keeping an eye on. 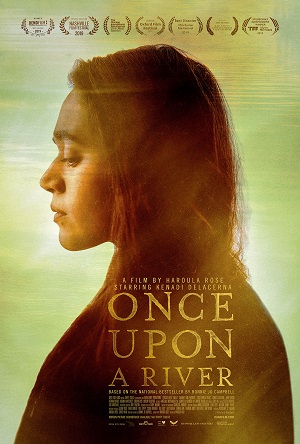