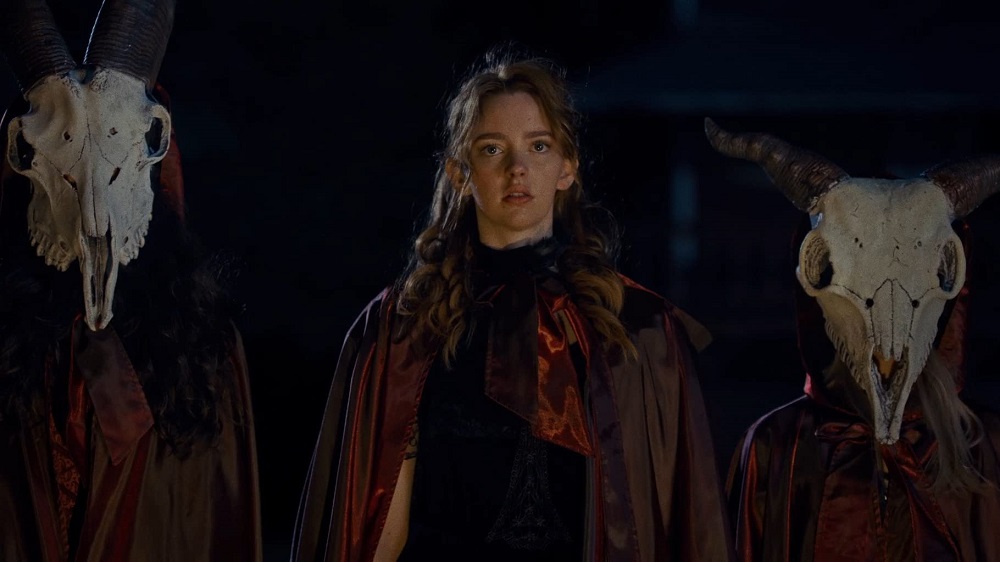 After a train robbery goes sideways, the Dalton gang find themselves stranded in a strange isolated town where the only residents appear to be the overly friendly women working at the local whorehouse. Turns out, they’re witches and they have a thing about trespassers who come for a visit, and it’s ain’t particularly friendly.

The world needs more horror-westerns. It’s an untapped subsection of the genre that should be explored far more often than it ever actually is. On that front, Aaron B. Koontz’s feature-length debut The Pale Door is undeniably refreshing. The filmmaker has undeniable respect for both genres and it shows in his careful confident handling of the story here. But his aspirations exceed his budgetary restraints, and while I enjoyed an awful lot of what this one had to offer, I also can’t say all of it works near as well as I’m certain it was intended to.

The basic plot concerns Dalton brothers Duncan (Zachary Knighton) and Jake (Devin Druid), the former the ringleader of a gang of talented outlaws while the other is diligently saving every penny he makes sweeping up floors at a small saloon in order to buy back to family farm stolen from them a decade prior. After the unexpected death of a member of his crew, Duncan’s gang convince him to allow his devoted sibling to join them on their next heist, a midnight train robbery certain to yield a massive score that will allow all of them to retire in luxury. He’ll watch the horses. What could possibly go wrong?

Plenty as it turns out. Not only is the well-guarded lockbox not filled with gold, it actually contains a terrified young girl, gagged and tied as if she were a hog being gotten ready for slaughter. Worse, Duncan is shot during the robbery, and if they don’t get him to a doctor soon it’s likely he won’t live out the night.

Suffice it to say, this young girl isn’t exactly what she appears to be. Worse, the town she comes from? The women there aren’t exactly timid little gorgeous nobodies looking for a gang of randy cowboys to come share their beds. They’re witches, and they have plans for the Dalton gang, Duncan and quiet little Jake in particular, and before the night is through it’s safe to say these ladies plan to feast on as many souls as they possibly can.

If it sounds a little From Dusk Till Dawn-ish I imagine that’s likely by design. There are also minor similarities to 1988’s Ghost Town as well, a cult straight-to-video favorite with awesome VHS artwork that allowed it to clearly stand out on a crowded display rack. But Koontz and his two fellow writers Cameron Burns and Keith Lansdale still do a fine job of making the premise their own, and while there aren’t a ton of surprises the core characters are engaging just enough to make the lack of shocks not too big a deal.

It also helps that the film is incredibly well cast with a number of familiar faces lending memorable support. It’s a list that includes the likes of Pat Healy, Stan Shaw, Noah Segan and Bill Sage, all of whom have at least one signature moment that’s worthy of applause. Also, the witches initial attack upon the Dalton gang is expertly staged, Koontz delivering the goods as far as gore and violence are concerned with confident bravado.

The plot is a bit of a mess, and the flashbacks involving puritanical emissaries taking their witch-burning sermons westward do not work at all. Additionally, even with their tragic backstories the witches themselves aren’t very well fleshed out, and I almost wish that Koontz hadn’t taken the time to bother and just let them be demonic flesh-eating spawns of Hell and left it there.

Still, I hiccups and missteps notwithstanding I still enjoyed The Pale Door. It’s a fun little horror-western with some strong set pieces and a number of delightful supporting turns. I’m glad I took the time to check it out.

Extras for this release include:

For those interested in a little wild west action inserted into their horror, Aaron B. Koontz’s The Pale Door is worth lassoing. It has a terrific cast, some solid set pieces, strong creature design and superb gore effects. While a little slight, and even if not all of the pieces fit together, this is still an entertaining supernatural shoot ‘em up worth checking out. 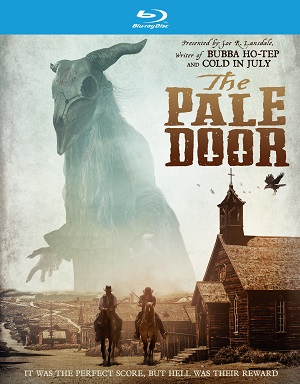