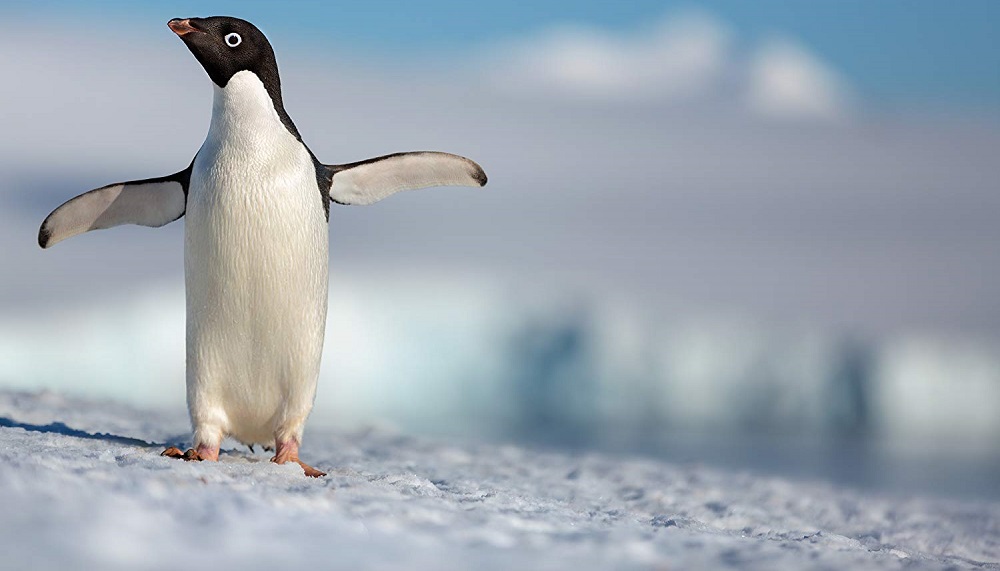 The thirteenth entry in Disney’s foray into nature documentary filmmaking released under the Disneynature banner, Penguins is arguably the cutesiest, most kid-friendly and relatively informationally thin of all of the films the company has produced up to this point. Directors Alastair Fothergill and Jeff Wilson turn their attention to the Adélie penguin living in the icy confines of the Antarctic. It’s as easy to watch as any of the entries in the series, and little kids are almost certainly going to adore the film. But while I did learn a few things I can say rather definitively this isn’t nearly as educational as other Disneynature efforts like Oceans, Chimpanzee or African Cats proved to be, and for adult viewers maintaining interest for all 76 minutes might prove to be a tiny bit difficult.

Penguins follows the normal template for these documentaries, anthropomorphizing its main characters and featuring easy to swallow narration (here spoken by an agreeably good-natured Ed Helms) written so that the youngest members of the audience will be able to understand what is going on. This story follows Steve, a five-year-old Adélie penguin making the trek to become a father for the very first time. He traverses the continent with millions of his fellow males to the rocky southern regions in order to build a nest and hopefully attract a mate. Steve is successful, he and his new lady love hatching two chicks who they then spend the remainder of the Spring and Summer months fattening up and protecting before the harsh Winter season descends upon Antarctica.

That’s pretty much it. Fothergill and Wilson showcase the courtship and feeding process (the latter including the requisite kid-friendly barf jokes that are good for a couple of giggles) in arguably the most detail, and I couldn’t help but love how the film celebrates how vocal these penguins are, especially during the period where the male is attempting to attract a mate. Predators are showcased tracking Steve’s offspring, most ferociously and unsettlingly of these the wiry skuas, scavenger birds who prey on both penguin eggs and penguin chicks with lethal cunning. But what’s weird is that this threat, while there, never feels especially ominous, and unlike other Disneynature productions this one tends to go out of its way to ensure its audiences things are going to work out.

There are a few mild annoyances, not the least of which is that the narration never mentions the words “climate change” at any point which doesn’t make a whole lot of sense. Also, the use of 1980s pop slathered all over the soundtrack, while sometimes amusing, gets progressively more annoying, the presence of REO Speedwagon and Whitesnake somewhat undercutting the on-screen images to a fairly noticeably degree. Finally, the film is oddly forgettable, and unlike many of the other Disneynature docs I’m having trouble remembering a single moment or image from this one in any sort of detail even though I just watched it a couple of days ago.

Even with all of that said, I’m still glad Disney allows Disneynature to exist and keeps releasing these documentaries just about every Earth Day. They present the wonders of our planet to a pint-sized audience of wide-eyed youngsters with heartfelt exuberance and joyous celebration. Each one presents magnificently shot stories of Earth’s astonishing creatures that almost can’t help but bring a smile to my face, and it makes me feel good that children have the opportunity to see these in the theatre. Penguins might not be up there with the best of these productions but that doesn’t make it any less easy to watch, younger viewers in particular likely to enjoy themselves immensely. 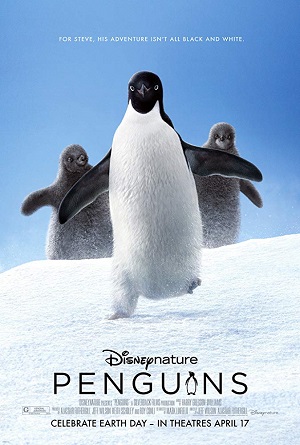