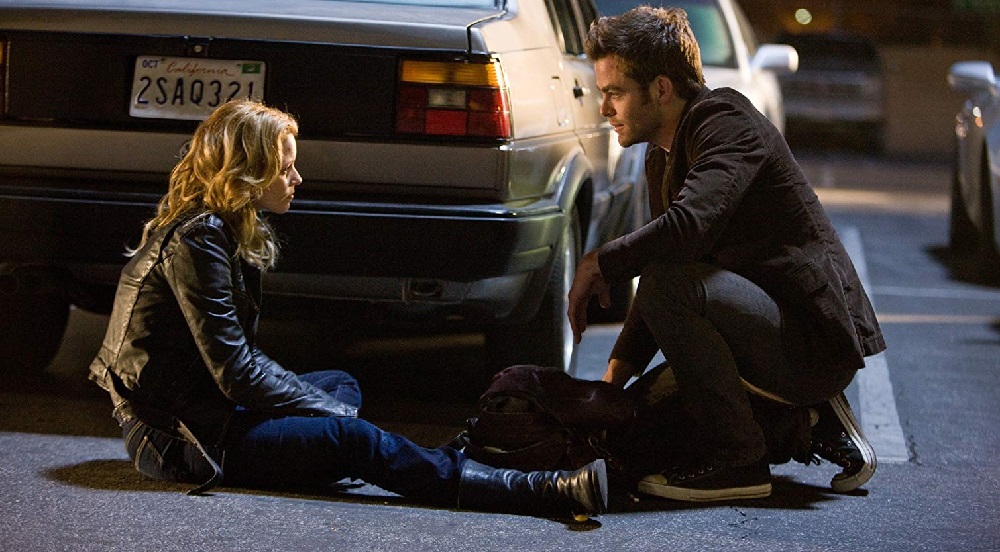 Sam’s (Chris Pine) father is dead. The fast-talking salesman has serious money issues thanks to one of his deals flying south, and the last thing he wants to do is head home to Los Angeles, see his mother Lillian (Michelle Pfeiffer) and go to a funeral for a man he hardly knew. But his girlfriend Hannah (Olivia Wilde) is persistent and the two of them are soon on a plane heading for Hollywood, and even though they get there a bit late they do get there all the same.

Sam meets with his dad’s lawyer Ike (Philip Baker Hall). While the basics of his father’s will are as expected, one part does catch the twenty-something by surprise. He is to deliver a shaving bag full of money to a young boy named Josh (Michael Hall D’Addario). He is also supposed to look out for the lad’s well-being. Why? Well, when he meets the kid’s recovering alcoholic bartender of a mother Frankie (Elizabeth Banks) things begin to make more sense. She’s the older half-sister he never knew about, and as all three of them become friends the last thing in the world he wants Frankie to know is the truth about how genetically connected all of them are.

Based on a true story, People Like Us hits home reasonably hard. Directed by Star Trek and Transformers scribe Alex Kurtzman, co-written by his frequent partner Robert Orci and fellow writer Jody Lambert, the movie is far more restrained and emotionally honest that I expected it was going to be. Kurtzman allows things to play themselves out with straightforward simplicity. He doesn’t pull on the heartstrings with saccharine and schmaltzy bravado, leaving the melodramatic clichés of the genre mostly on the cutting room floor.

Not that this movie is doing anything too original or inventive. The scenario playing out is as a Douglas Sirk meets Frank Capra drama updated for the 21st century. Will Sam find a way to forgive the ghost of his dead father? Will he become a better person by coming into contact with Frankie and Josh? Can his relationship with both his estranged mother and his frustrated girlfriend be salvaged? The outcome to these queries and other questions are never in doubt, so there isn’t a ton of shock or awe to be found in watching events play themselves out to conclusion.

Pine is good, however, showing there’s more to him than the cocksure hero he portrayed in Star Trek, Unstoppable and This Means War. He mines some intriguing interior depths, has some great moments with Pfeiffer and D’Addario and shows a fair amount of believable insecurity as he brings Sam to life. He does overdo it a time or two, and I never did fully feel he disappeared completely into the role, but his performance is still overall quite good and deserving of a modicum of praise.

As for Banks, this is potentially the best I’ve ever seen her. She’s incredible as Frankie, and every time the movie focused on her things elevated up one or two additional notches. Banks never does what I expected, doesn’t sugarcoat her performance in an attempt to make her character more empathetic or likable. She shows layers of complexity the script alludes to but doesn’t make entirely clear. Even when events force Frankie into predictable corners the way the actress deals with them still feels fresh and believable, all of the bits revolving around her character’s relationship with her son Josh bursting with an authenticity that frequently had me choking back tears.

Kurtzman could be a good director. I like that he knows when to say when and has an idea of when to pull back and allow events to speak for themselves. Still, much like many of the scripts he’s crafted with Orci, there is a disheveled raggedness to the narrative that gets more obnoxious as things progress. The climactic events don’t have a lot of intricacy to them, the climax delivered with a matter-of-fact simplicity that’s moderately underwhelming.

I still found plenty to enjoy about People Like Us. I was never bored, and the central story emotionally resonated. More importantly, Banks is incredible, her performance the anchor that holds everything together. As dramas go I honestly can’t say Kurtzman’s debut did much I hadn’t anticipated. But by the time it was over I was still grabbing for the Kleenex and dabbing my eyes, the human story at the center of the film a cozy triumph worth celebrating. 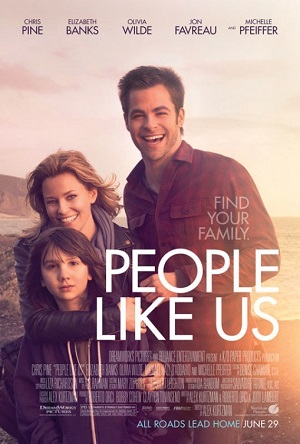