Portrait of a Lady on Fire Paints an Unforgettable Picture

Artist Marianne (Noémie Merlant) has been hired to paint the portrait of the lovely Héloïse (Adèle Haenel) by her wealthy mother (Valeria Golino). She must do this surreptitiously , as the young woman has refused all attempts to allow herself to be memorialized on canvas. Héloïse is upset that her mother has pulled her out of the convent and arranged a marriage to a wealthy Spaniard, and because of this she’s making this process as difficult as possible. To get the portrait completed Marianne will have to make friends with the young woman and then paint the picture by memory, hopefully finishing before Héloïse has any idea of what is going on.

Portrait of a Lady on Fire is magnificent. This sensuous human drama rarely goes the way one expects it is going to, writer/director Céline Sciamma (Girlhood) delivering an engrossing romantic historical drama that has just as much to do with today as it does its 18th century setting. It is a brave, forthright feminist manifesto of self-determination and entrenched patriarchal sexism that twists and turns in several shocking, frequently surprising and consistently fascinating ways.

Yet at the film’s heart it is a devastating love story. Marianne and Héloïse sisterly friendship blossoms into something far more personal than either of them at first believe is possible. They begin to understand one another with intimate certainty, finding solace in each other’s company even when both women know with absolute certainty that whatever it is they are feeling will not be allowed to last. The world will force them back onto the set path society has already predetermined they most walk upon, and even in their secluded isolation on an island off the coast of Brittany this brief moment of feminine certainty will vanish into the ether like the endless mist generated by the ocean’s waves as they crash against a merciless shore.

Cinematographer Claire Mathon (Stranger by the Lake) shoots the film brilliantly. She gives the proceedings a hauntingly corporeal gracefulness that leaps off the screen, the way she utilizes natural light and deep, unyielding blacks a constant thing of pitiless visual beauty. There is a stark sincerity to her images that fits this story perfectly, the ghostly effortlessness of Mathon’s camera movements breathtaking in their intoxicating urgency. Dorothée Guiraud’s (Queen to Play) costumes are equally outstanding, as is Thomas Grézaud’s (Tomboy) purposefully unadorned production design, while editor Julien Lacheray (Grand Central) cuts things together with a minimalistic precision that’s superb.

All of the actresses are terrific, including Luàna Bajrami as a young maid who ends up playing a much bigger part in the overall story than I admit I assumed she was going to, her subplot an astonishing bit of narrative virtuosity that helps augment the themes Sciamma is exploring nicely. But as glorious as Merlant is, and there is no denying just how exceptional she proves to be, it is the luminous Haenel whom I find I cannot forget. Her performance is burned into my brain like an inferno refusing to die out. The subtle emotional complexity of what it is that Haenel is doing is rich in intricate subtext and nuance, the clarity of what she conveys, oftentimes without words, extraordinary.

There’s so much more I could say, but I find I’d rather audiences discover the exquisite wonders of Sciamma’s latest stunner knowing as little about the various plot points and character beats as possible. Portrait of a Lady on Fire is more than a historical romance. It is more than a feminist drama drawing a metaphorical line from the distant past to the here and now. Sciamma has crafted a divine heartbreaker that only grows in prestige and power the more I keep pondering its many interior convolutions, the lasting impact it has made upon me one I doubt I’ll be shaking off anytime soon. 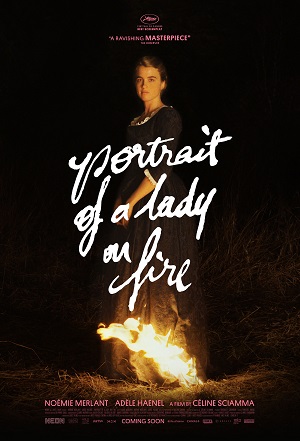