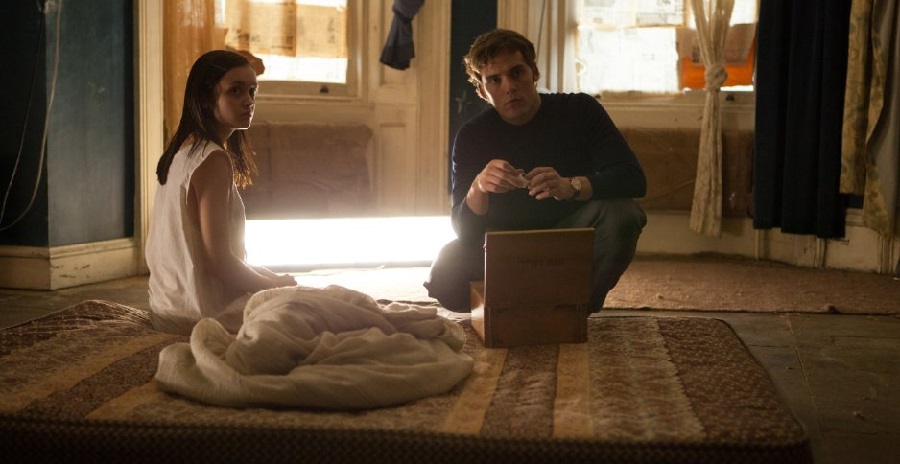 Esteemed Oxford Professor Joseph Coupland (Jared Harris) is out to prove that things considered supernatural and otherworldly are nothing more than a creation of an injured mind and thus can be controlled and, with care, nurturing and assistance, ultimately destroyed. Aided by graduate students Krissi Dalton (Erin Richards) and Harry Abrams (Rory Fleck-Byrne), Coupland enlists budding moviemaker Brian McNeil (Sam Claflin) to document their progress, hoping his images will calm doubts and prove to all the professor’s thesis is correct. 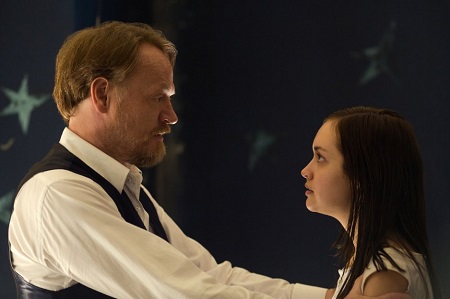 Their subject is the mentally unhinged Jane Harper (Olivia Cooke). An orphan who has been thrown from home to home with apparently little apparent thought to her well-being, she claims there is a malevolent spirit residing within her known as Evey. Is she possessed? Is she faking it? Or is Jane just mentally ill, years of abuse and abandonment forcing her to retreat inside her own psyche creating this devilish spirit as way to unleash the rage and the vitriol she’s always been too timid and apprehensive to openly express?

Even though The Quiet Ones, like so many other paranormal genre films, proclaims to be inspired by actual events, it shouldn’t come as too big a surprise or a shock to any potential viewers that the answers to all those questions are concretely tinged with elements of the supernatural. Professor Coupland might be on the right track but he’ll never truly know, the entity possessing Jane Harper far more authentic and real than anyone involved with the experiment cares to recognize. She’s dangerous, carnage and devastation traveling alongside her, the desire to save their subject potentially the undoing of the entire research team as all are slow to recognize how much peril they are collectively in.

The crew behind the film is as eclectic a mixed bag as any I’ve come across in quite some time. Director and co-writer John Pogue has composed scripts for films as varied as The Skulls, U.S. Marshalls, the Rollerball remake and Ghost Ship. Another screenwriter, Craig Rosenberg, was responsible for composing After the Sunset and The Uninvited, while the final scribe making up this odd trio, Oren Moverman, is a bona fide Oscar nominee known for The Messenger, Rampart, Married Life and I’m Not There. It’s a fairly disparate group, to be sure, and as such the ebb and flow of the film itself is oftentimes a relatively uneasy one as the changes in tone and direction aren’t nearly as organic or as natural as I personally would have wanted them to be.

Is this because there were too many cooks baking away inside the kitchen? I can’t answer that. What I can say is that the elements and pieces of the film that come off the best are the subtle ones, the segments that do not telegraphing their scares instead of allowing them to sneak up on the viewer with intelligently constructed authenticity. When The Quiet Ones works it does so stunningly, and I love the fact that Pogue, Rosenberg and Moverman have placed the emphasis on character and story more than they have on either shock or awe. They present much of this with a matter-of-fact aggressiveness recalling John Hough’s 1973 shocker The Legend of Hell House, watching Brian trying to navigate the ins and outs of all he’s documenting absorbing in its sinister nervousness.

Yet, there are times where the focus gets out of whack, where either Pogue’s handling of the material grows uncertain or all the elements contained within the script fail to join together with cohesion. The rules of their paranormal adventure waver and change based more on a whim than they the do for any concrete reason, and while there are shocks galore they don’t resonate with an emotional truth which could potentially allow them to be more long lasting.

Not that the actors aren’t up to the challenges put in front of them all the same. Richards, in particular, is an effervescent jolt of electricity and excitement, mining the meandering dynamics of her character with relative ease, making her eventual devolution into terror and despair more effective in the process. Cook and Fleck-Byrne are also good, the former doing the best she can with a relatively underwritten character while the latter adds layers and nuances to his portrayal the script itself only appear to hint at. 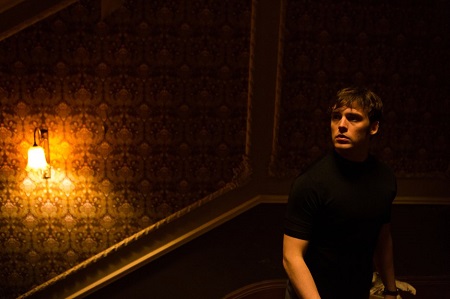 As for the two leads, Harris and Claflin are excellent, each making the most of what they’ve been handed, allowing events to shape and mold them in ways that are consistently interesting. Claflin, eschewing the grandiose posturing that made him an instant heartthrob after his performance in The Hunger Games: Catching Fire, isn’t afraid to open up, to allow his apprehension and fear to show even while his affections for Jane blossom. Harris, meanwhile, is all pomp and bluster, but it’s only a façade, the real engine driving his desire to see the young woman cured coming from a place of tragedy that lines every move he makes and syllable he utters. It’s a wonderful portrait of hubris and regret, everything building to a place of pain that’s as horrifically forgone as it is achingly unfortunate.

I do like The Quiet Ones a fair little bit. If it doesn’t come together as well as it might have, if pieces don’t always feel as connected to the whole as the maybe should have been, the core of this haunted little tale of possession and discovery is still a strong one, making the final images a haunting series of mistakes and misbegotten heroics that are as understandable as they are catastrophic.  Pogue’s grip on all of this might be tenuous, but he knows how to maintain control and deliver the good when it matters most, the climax a terrifying maelstrom of emotional misery that left me shaky and unsettled long after the screen had faded into black. 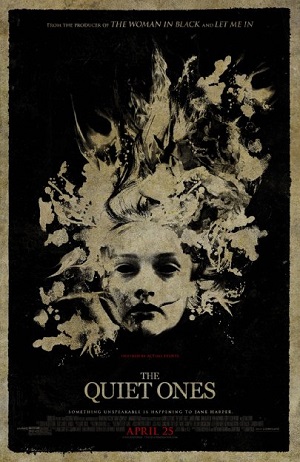